Taking stock of a tricky QB situation: How a lingering, nagging thumb injury could have changed the fortunes of the Longhorns’ season 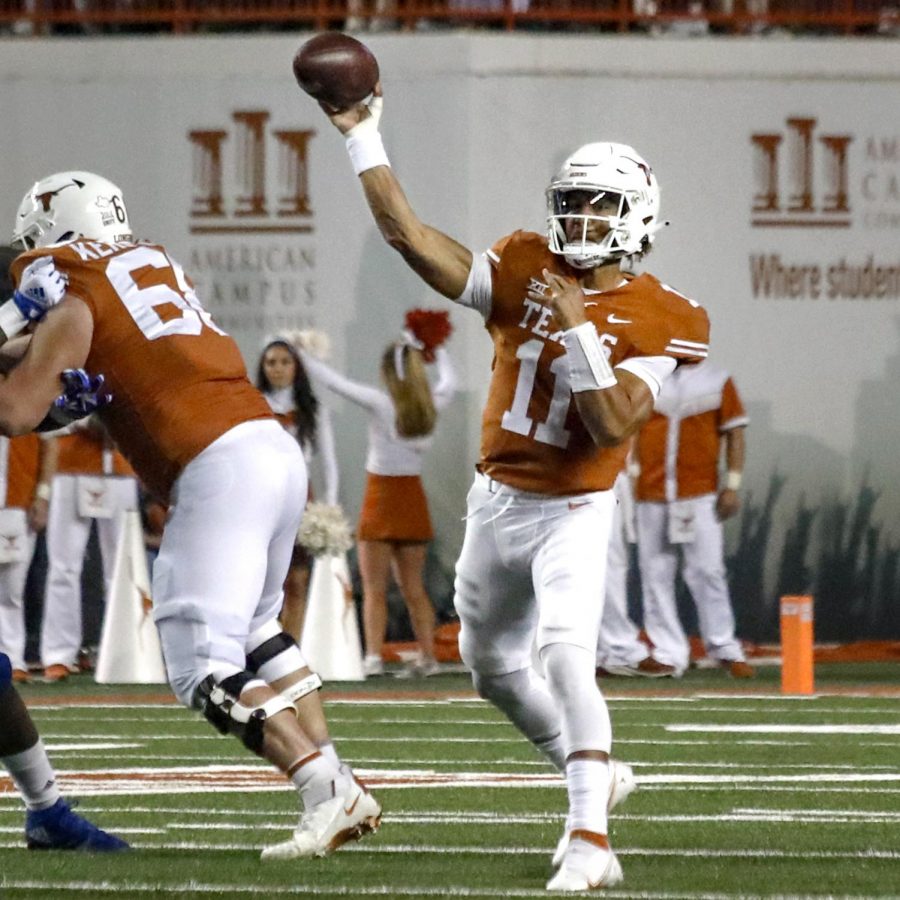 In Texas’ second drive of last Saturday’s loss to Kansas, Casey Thompson led the Longhorns down the field for a touchdown.

Then, the redshirt junior quarterback spent the next few drives on the sideline, watching as his replacement, redshirt freshman quarterback Hudson Card, committed two costly turnovers that would result in 14 points for the Jayhawks and a 35-14 deficit heading into halftime.

In the moment, it seemed like an odd decision. Why take out your starting quarterback after he just marched down the field for a touchdown?

But the switch was head coach Steve Sarkisian’s plan all along, no matter the score or situation.

“The idea going into the game was (that) Casey was going to play the first two series of the game,” Sarkisian said. “Hudson was going to come in (on) the third series, and then we were going to monitor it from there.”

The quarterback situation hasn’t always been this much of an ordeal.

But in the second quarter of the Red River Rivalry, where Texas led 28-14, Thompson hurt his thumb before returning to the game after a few snaps. Save for a highlight Bijan Robinson run and a beautiful arcing touchdown pass to wide receiver Xavier Worthy, the Texas offense ground to a halt in the second half in the epic collapse.

The next week, Oklahoma State continued the blueprint: load the box to stop the run game and dare Thompson to beat the defense with constant pressure in his face from poor pass protection. It worked — Baylor followed the same game plan to take down Texas in Waco, where Thompson nursed his taped thumb as the Longhorns headed off the field.

Thompson is quick to point out that many players compete hurt at this point in the season, even if he said himself he hasn’t been 100% since the Oklahoma loss. It’s easy to play the ‘What if?’ game — especially if quarterback play might not even be on the list of top five things to fix for Texas.

Even with the injured thumb, which has been taped every game since the Oklahoma loss, Thompson threw for six touchdowns and 358 yards against Kansas.

“I try to build my game by Kobe Bryant,” Thompson said. “He played through a lot of injuries during his time, and I remember he had a finger that he just dislocated and popped back in place and ended up scoring a lot of points.

So, then it really inspired me that (NFL quarterback) Tua Tagovailoa played through a dislocated finger last week for the Miami Dolphins. So, I was like, ‘Well, I have a sprained thumb and I have some damage in there, but I’ll be fine.’”

Only Thompson truly knows if the thumb played a role in the rare mistakes he made against Kansas, including an overthrown ball to an open Marcus Washington on a curl route in the fourth quarter that gave Kansas the ball back, or an ensuing interception intended for Xavier Worthy in the end zone.

But it’s clear the sprained thumb — suffered on his throwing hand — affected the quarterback in the slim losses to the Cowboys and the Bears.

So, as Longhorn fans look back and point to the crucial juncture of the season — up 38-20 at halftime to then-ranked No. 6 Oklahoma, before collapsing in epic fashion in the second half to fall 55-48 and lose five straight games, there’s one more moment right before that deserves its own due. It’s Thompson’s thumb injury.

It played a role in Sarkisian’s decision to pull Thompson out of the game against Iowa State, creating a quarterback carousel that came back to bite Texas against Kansas after a Card pick-six and fumble turned into 14 points for the Jayhawks.

Sarkisian indicated that the carousel will come to a stop this Saturday against West Virginia, naming Thompson his “obvious” starting quarterback.

“I think that we’re both very good quarterbacks,” Thompson said. “And I think that a few years from now we’ll both probably end up in the NFL, hopefully. So it will all work out in the end. But right now, we have to focus on what’s best for the team.”