Texas fails to deliver in Sark’s first season, anticipation for better will loom in the offseason 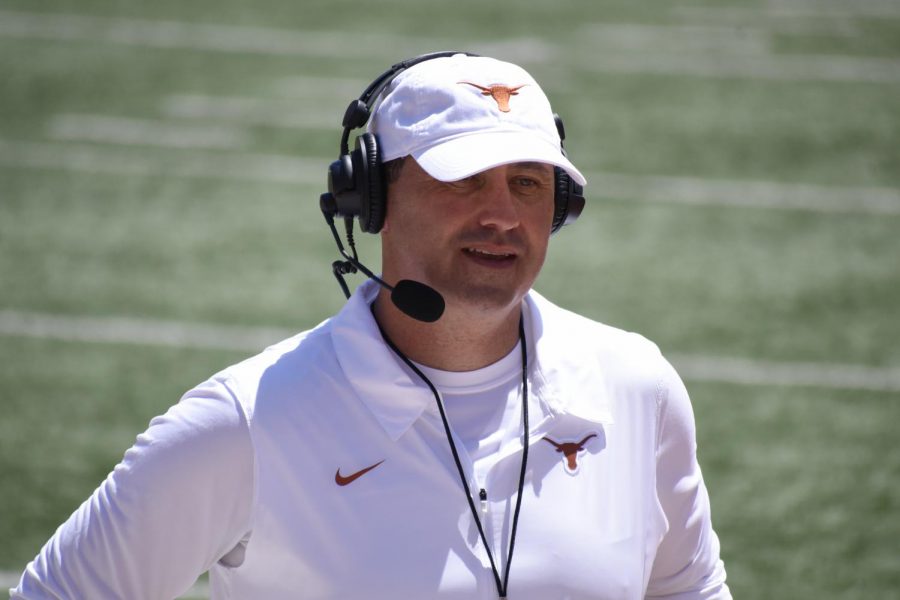 A season with a revamped coaching staff, a new slogan and high expectations from the Longhorn faithful will end in Austin without an invitation to a bowl game after a Week 12 loss to West Virginia.

Although Texas couldn’t live up to its No. 21 preseason ranking in the AP Poll, there were some positives that came out of Steve Sarkisian’s first year as Texas’ head coach.

Athletic director Chris Del Conte brought Sarkisian to Austin after the now head coach had great success at Alabama with his innovative schemes as the offensive coordinator.

Freshman wide receiver Xavier Worthy had a breakout season, showcasing his ability to make defenders miss and find the endzone. In only 10 games, Worthy broke the Texas freshman record for most receiving touchdowns in program history.

Worthy managed to find the endzone multiple times in three contests and scored touchdowns in more than half of Texas’ games. While the season did not go as planned, the Longhorns at least know who their No. 1 wide receiver is going to be as Texas heads into the offseason and prepares for a College Football Playoff chase in the new year.

Having a standout wide out is great, but it’s even better when supplemented with an all-around, versatile, dangerous running back in sophomore Bijan Robinson. At times this season, Robinson showcased how special of a talent he is with his elusiveness and one-cut ability.

Even with a season-ending injury, Robinson still passed the 1,000-yard rushing mark for the first time in his career, becoming the first Texas running back to do so since D’Onta Foreman in 2016.

Already having a superstar in the backfield and another out wide, the Longhorns just need consistency at the quarterback position to get the offense rolling, something that has clearly been lacking throughout Texas’ seven-game losing streak.

Sarkisian struggled in his first year in Austin finding a quarterback. Freshman Hudson Card was Sarkisian’s go-to man at the outset before the head coach made the ultimate decision to switch to junior Casey Thompson under center. Although Thompson started the majority of games, Sarkisian played both quarterbacks in half of the games, never truly settling into one consistent starter.

Constantly making changes at the quarterback position throughout games ultimately did not help build offensive cohesiveness and did more harm than good.

First-year defensive coordinator Pete Kwiatkowski had impressive moments as well as mediocre ones throughout his first season on the Forty Acres. This was expected though, considering this is the third defensive coordinator in three years for the Longhorns. A lack of consistency for Texas, as seen in multiple positions and coaching roles, created mayhem for the Longhorns.

The defense could not always contain opposing offenses, especially in high-scoring Big 12 games. Texas  conceded at least 27 points in each conference matchup. The Longhorns allowed both Oklahoma and Kansas to put up over 50 points in each contest, something that had previously been unheard of.

When the Longhorns kick off the 2022 season, the program should have a better understanding of the scheme that Kwiatkowski utilizes. It takes time to learn new schemes, especially when there have been three different defensive coordinators moving in and out of Austin over the past three seasons.

Yet, what hurt the Longhorns the most this season was the inability to keep the “All Gas No Breaks” mantra in the second half of games. Texas dropped games to Oklahoma, Oklahoma State and Baylor after entering halftime with a significant lead. What appeared to be a shoo-in became a nightmare for Longhorn faithful when third and fourth quarters hit.

It will be a long offseason for Longhorn fans as the pressure and anticipation will certainly be heightened for Sarkisian and company in year two.