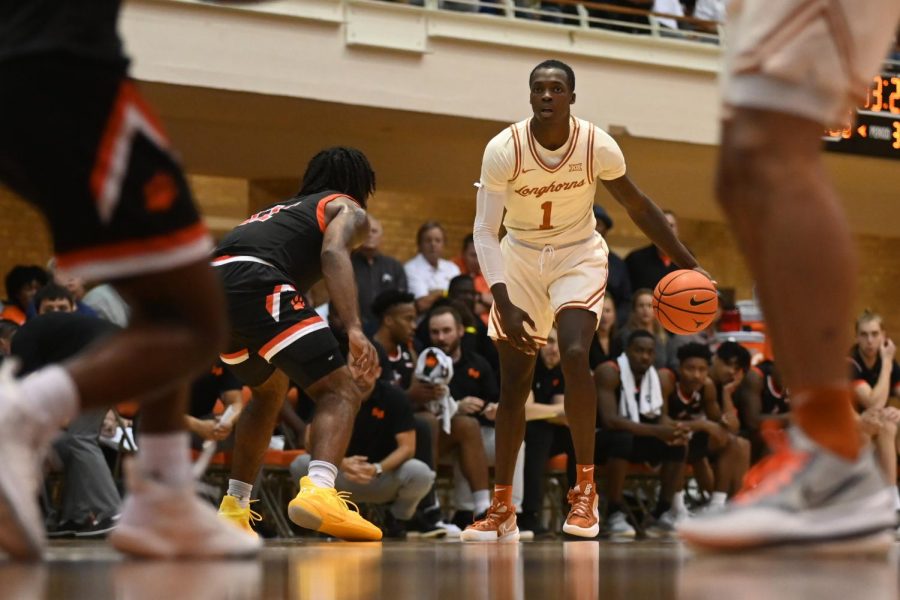 If you watched junior forward Dylan Disu on Sunday, you would probably be shocked to learn that his former teammates gave him the nickname “Bambi” due to his lankiness and awkwardness moving around the court.

The Vanderbilt transfer played with ease and grace in Texas’ final road non-conference game against Stanford at the T-Mobile Arena in Las Vegas, Nevada.

Disu knocked off rust in his second appearance as a Longhorn after recovering from a February knee surgery, ending the afternoon with 11 points, four rebounds and a steal in 14 minutes. The 6-foot-9-inch forward also provided some much needed height for Texas to be able to take on a Stanford roster that hosts seven players who stand 6-feet-9-inches or taller.

The No. 17 Longhorns rolled into Vegas looking for their first Power 5 win of the season and delivered with a 60-53 win over Stanford.

It was a slow start to Sunday’s well-balanced matchup with both teams taking nearly seven minutes to reach double-digit scoring.

Texas was able to turn up the defensive pressure and control the pace of the game to end the first half, something that the team had previously struggled with during its last two road games. The Longhorns held Stanford scoreless for the last 3 minutes and 28 seconds of the first half and ended the half with a 34-27 lead.

Even though the second half began at a pace similar to that of the first, Texas ran away with the lead.

Timmy Allen, senior forward and former First Team All-PAC-12 member, scored the first three of the second half to extend Texas’ lead. Allen was a force to be reckoned with against his former conference opponent on both ends of the court, scoring 11 points and forcing three steals and one block.

Multiple Longhorns showed out Sunday, with senior guard Andrew Jones also scoring in the double digits and senior forward Christian Bishop getting two highlight-worthy dunks of his own.

Although Sunday’s game was a strong showing of the positionless basketball head coach Chris Beard has been preaching about all season long, the main story of the day was Dylan Disu.

The former Commodore proved that he was the player that Texas had been desperately in need of. Many of Disu’s points came from key moments in the game. His first 3-point basket landed when the score was tied at 24-24. The Pflugerville product also made a second-chance layup off an opponent turnover to give Texas a 29-26 lead.

With Texas beating Stanford just by a seven-point margin, Disu’s impact is not easy to miss. His presence on the court finally fills out the roster of stacked transfers that Beard had been putting together all throughout the offseason. Disu’s ability to make key plays during tight games is exactly why Beard wanted to bring him back home to Texas.

The 2021 SEC Scholar-Athlete of the Year’s return to the basketball court comes at just the right time for Texas. The Longhorns will open up conference play in a little under two weeks to a tough 10–1 West Virginia Mountaineers team.

Texas needs to finish its non-conference schedule back in Austin with games against Incarnate Word and Rice, but the job will be just a little easier with Disu on the court.