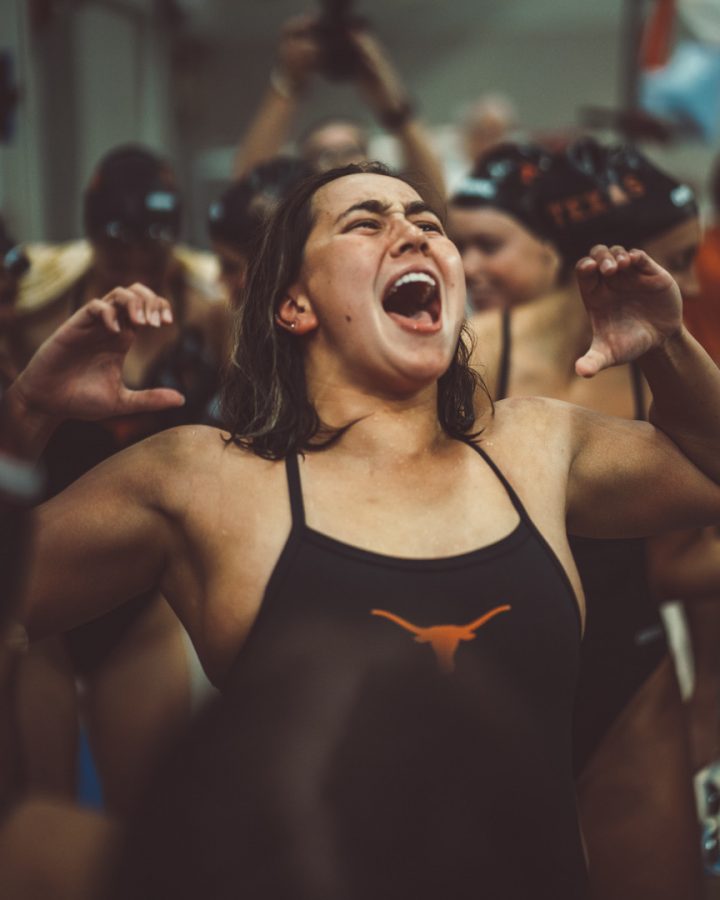 Editor’s Note: This article first appeared in the December 2 broadsheet.

A week after Erica Sullivan won a silver medal in the Olympic games, Texas women’s assistant swim coach Mitch Dalton was on the phone with the future Texas swimmer. The topic of the call? Post-Olympic depression.

He wanted to make sure Sullivan could hit the ground rolling once the freshman came to the Forty Acres in August.

“I think those were even her words: ‘I want to hit the ground rolling with mental health support,’” Dalton said. “She just wanted to be proactive with all that.”

So did Dalton. The former Team USA coach and Sullivan both said post-Olympic depression is common when it comes to swimmers: After months of preparation for competition at the top level, the weeks and months following the Olympics can be hard for athletes as they transition back to their daily lives.

“I just remember, before I even showed up to Austin, I had a phone call with (Dalton),” Sullivan said. “And he was just like, ‘I know you’re susceptible to (post-Olympic depression), so let’s start to get this worked out now, so the minute you get there, you can get to working with our sports (psychologist) or our staff at (Texas) athletics.’”

That’s exactly what they did. Dalton set Sullivan up with a personal sports psychiatrist to get ahead of the curve, getting “all that worked out,” Sullivan said.

Sullivan has been vocal about her own mental struggles after losing her father to cancer while simultaneously navigating her journey in coming out.

Following the hardships her teenage years faced, the silver medalist already had a background with therapy. After watching her father in a battle with cancer, Sullivan began going to see a therapist to help cope with his loss.

“What (my therapist) and I were doing was building tools in my emotional toolbox. Filling it with tools and coping mechanisms and the ability to grieve so that if something bad happened to me again, I can be able to process it and understand it,” Sullivan said.

Sullivan said she hit a personal rock bottom in February 2018. But after six months of “intensive therapy,” the young athlete relearned how to process emotions in a healthier way despite some challenges.

“It took a long time. It got worse before it got better, but I had to trust the process,” Sullivan said “You have to hold on to hope that it does get better.”

So, seeing how the coaching staff at Texas cared for its team was a key priority.

Before competing in the Olympics or coming to Texas, Sullivan originally committed to the University of Southern California, when she was just 16 years old. Following changes to the coaching staff at USC, the Las Vegas product then re-entered the recruiting pool and decided to defer a year of college to train for Tokyo.

One way Texas head coach Carol Capitani and Dalton are active in caring for the team’s mental health is setting aside time before practice every Wednesday to discuss hard topics outside of the pool. This series of conversations began in October, hence the nickname “Talktober” and has since continued deeper into the season.

This type of attention to a broader scope of the athletes health was one of the reasons Sullivan decided to choose burnt orange as her college color after a visit to the Forty Acres.

Breaking onto the big stage

Before Sullivan was swimming with millions watching, she got her start in the pool at just six years old and her first taste of the Olympics two years later.

“I remember (the) 2008 Beijing (Olympics), seeing Michael Phelps win all those medals,” Sullivan said. “As an 8-year-old, you can’t watch the screen and not be mesmerized and be like, ‘I want that to be me.’ If you don’t have goals like that, why else are you in the sport?”

The first-time Olympian entered the games in a familiar place, having been to Japan to visit family many times before. Sullivan said she could feel a special energy as she prepared to race.

But she had no idea that energy would feed her into a silver medal finish.

Finishing four seconds behind swimming legend Katie Ledecky, Sullivan captured the second spot on the podium in the first ever 1,500-meter freestyle swim for women in the Olympics. It was a historic win for Ledecky, who took home the first gold in this new event, but she was just as excited about seeing the rookie come in right behind her as she was about her own win.

“I just remember swimming the race and not knowing where I was (before) touching the wall and seeing Katie screaming and slamming the water,” Sullivan said.

Unaware of her position in the race and thinking the veteran was celebrating her own triumph, Sullivan was stunned to look up and see a number two next to her own name.

At that moment, realizing Ledecky was celebrating their Team USA top two finish together and not just herself, Erica Sullivan became an Olympic medalist.

Life beyond the pool

Following her time in Tokyo, Sullivan has used swimming again to help her find a sense of peace. But since joining the Longhorns, she also has found other ways to keep her mind active outside of the pool.

The radio-television-film freshman uses movies and music as coping mechanisms to help her, even joking that Taylor Swift “gets me through all of the emotional trauma that I need to get through.”

Despite still being young and relatively new to the global stage, Sullivan already knows that her plan is to try to compete in the 2024 Paris Summer Olympics. When she does retire from the sport, she already has another passion she plans to pursue.

“Once that swim career is done I am going to be full on pursuing film. I set big goals,” Sullivan said. “I want to direct and to write my own original scripts.”

Sullivan already has a screenplay she has written, but wants to keep it to herself until she can work on the project with full focus. For now, outside of her RTF classes, her focus remains in the water, where she is already dominating as a Longhorn.

Since arriving in Austin, the freshman has already earned the Big 12 Women’s Newcomer of the Week award and set a season best 9:44.75 in the 1,000-yard freestyle. She’s excelling not just due to her work on her physical skills, but also due to her and her coaches’ focus on her mind.

“I think (the coaches) being vocal about the importance of mental health early on may have prevented a lot of things that could have happened down the road,” Sullivan said.