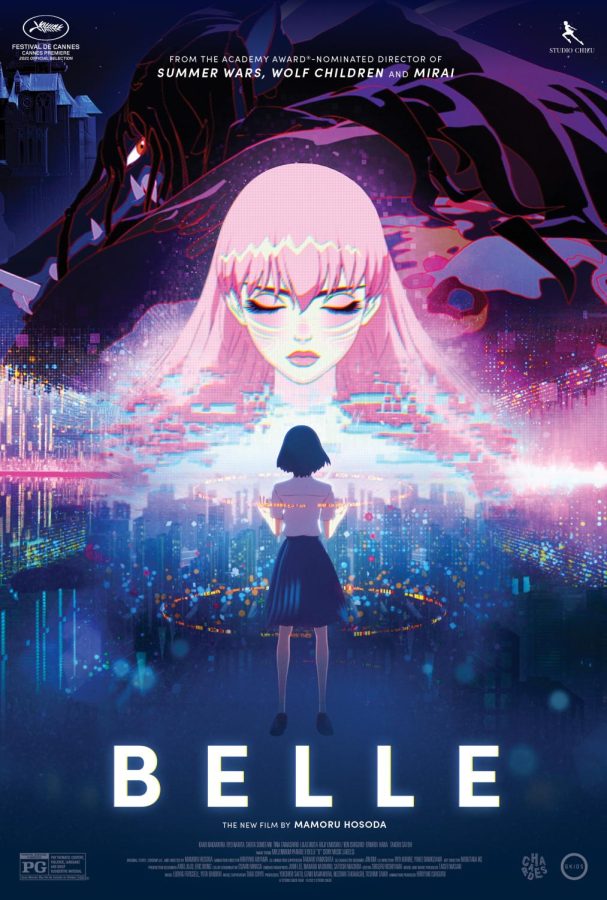 Mamoru Hosoda’s gorgeously animated film “Belle” comes to life bursting with colorful imagery and vibrant music. Released to select theaters in the U.S. on Jan. 14, the Japanese anime adventure, a coming-of-age “Beauty and the Beast” retelling, follows main character Suzu (Kaho Nakamura) as she becomes entangled in a virtual reality space dubbed “U.” Within the U universe, users don cartoonish avatars that allow them to hide their true identities. To escape her grief-stricken reality after the loss of her mother, doleful Suzu enters the world of U and soon finds herself plunged into stardom, unlocking her incredible talent for singing.

As Suzu continues to live this double life — an unassuming high school student in real life and international internet pop star in the world of U — she encounters a criminal on the run known as the Beast. Suzu embarks on a heroic journey to find and help the Beast before U’s enforcers of justice unveil his true identity.

Its visuals remain consistent with Hosada’s previous works, such as “Mirai” and “Summer Wars,” known for their beautiful cinematic imagery. His experimental CGI animation is full of shapes and bright colors, introducing audience members to the striking world of U, a strong contrast from the traditional yet breathtaking scenes of Japan’s countryside. Intertwining both new and old modes of animation, “Belle” dazzles with an amalgamation of visuals, every frame on-screen as eye-catching as the next.

The film’s impressive soundtrack, a joint production by an entire chorus of composers, covers a vast array of genres. With tunes ranging from soulful piano sonatas to jazzy contemporary grooves, “Belle” offers a little something for every audience member to enjoy. Within tracks that involve Belle herself, Nakamura provides a vulnerable yet powerful singing voice to the pink-haired, freckled starlet.

Despite the impressive music and visuals, the airtight plot of “Belle” begins to unravel as convoluted plot threads emerge in the second half. Some background characters, while vibrant and charming, prove detrimental to the plot, serving only as a distraction to the main story. The film’s biggest faults — dwelling on unimportant plot threads and not sufficiently developing important storylines — leave the audience scratching their heads at the movie’s conclusion. However, “Belle” still tugs at heartstrings with intrinsically human themes, such as overcoming loss and discovering self-love.