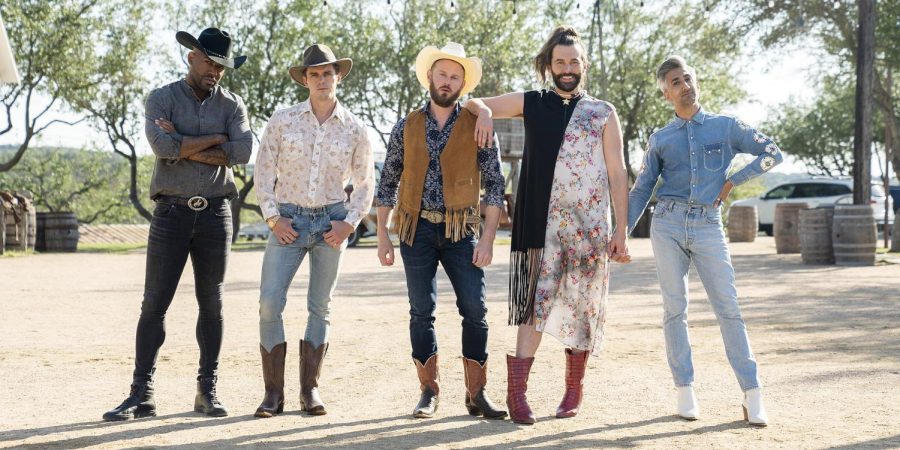 Rocking off the new year with life-changing makeovers, liberating haircuts and elaborate home renovations, the sixth season of “Queer Eye” premiered on Netflix on Dec. 31, offering fans a window into the lives of 10 unsung community “heroes” in a brand new location: Austin, Texas.

“I was really excited to see the way that they and their creative team would interact with the city,” said Jones, a Spanish and economics sophomore.

The Fab Five’s depiction of Austin elicited mixed emotions from many Longhorn fans. While some identified with the eclectic Austin they saw on screen, others felt the portrayal misrepresented their beloved city, overplaying Texas stereotypes and neglecting Austin’s unique culture.

For Jones, the new season’s familiarity offered a better watching experience, allowing him to interact with highlighted small businesses, such as OMG Squee and the Broken Spoke, and community causes, such as housing advocacy.

“It was exciting to see things I recognized — pans of the Tower, Littlefield Fountain,” Jones said. “Austin is so unique in that it has so many different small businesses and cool little places. They represented a lot of those in the show. It is cool to get the opportunity to support those places.”

Because the cast engaged with a variety of Austin personalities — rural ranchers, urban activists, small business owners, live musicians and more — Jones said he believes the Fab Five’s portrayal of Austin did the city justice. Unlike his experience with past seasons, Jones said he felt attached to his television, fully engaged in each episode.

“They did a really good job of encapsulating the diversity of the city,” Jones said. “The only place the creative team fell short is they kept allowing Antoni to tuck his jeans into his boots.”

While a smash hit for some, for others, such as Alexis Hoeller, an international relations and global studies freshman, the Fab Five missed the mark, leaving out key details about city culture.

“It didn’t show the Austin I know,” Hoeller said. “We live in a student area and Austin’s a lot larger than that, but I was hoping for more UT and city life.”

Rather than capitalizing on the people and places that remind her most of Austin, Hoeller suggested the depiction unfairly overplayed horse-riding, “country bumpkin” Texas stereotypes.

“There was resistance between the country way of life versus the ‘Queer Eye’ way of life,” Hoeller said. “There was a definite tension with Texas culture for a lot of people they showed. I don’t think that’s representative. I don’t think Austin’s very country.”

“(Flores) is super sweet,” Torres said. “I hadn’t talked to her in a long time, but it was cool to see her on ‘Queer Eye’ and see her in a different light with her family.”

Torres said while watching Flores on screen brought her to tears, she felt disappointed the group didn’t focus on the spaces that make Austin unique.

“I was hoping that they would explore Franklins or Blue Genie Art Bazaar, maybe Airport Boulevard — those sorts of places,” Torres said. “When they explore places people recognize, that gives them a space to showcase places that are important to Austinites.”