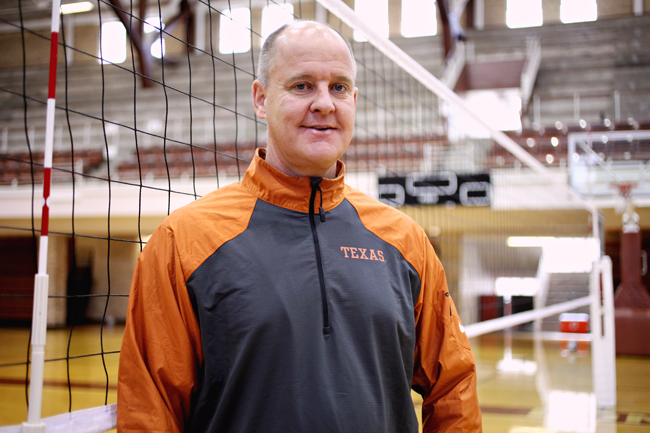 Volleyball- In his 12 seasons as head coach, Jerritt Elliott, has made 11 NCAA tournament appearances and last weekend he recorded his 300th win by beating Illinois. " />

Volleyball- In his 12 seasons as head coach, Jerritt Elliott, has made 11 NCAA tournament appearances and last weekend he recorded his 300th win by beating Illinois.

With the additions of assistant head coach Jordan Larson and former Kentucky outside hitter Madisen Skinner to the Texas volleyball program, the Longhorns are ready to make another push to add a championship trophy to head coach Jerritt Elliott’s collection of accolades next season.

Following an unexpected early exit from the playoff tournament at the hands of No. 10 Nebraska in the Austin regional final, the losses of associate head coach Tonya Johnson and junior opposite hitter Skylar Fields threw an unexpected wrench into the Longhorns’ offseason. The departures of Johnson as an esteemed coach and known recruiting guru and Fields as one of Texas’ offensive X-factors awoke skepticism in Texas’ chances to reach the 2022 National Championship game.

However, the Longhorns’ turbulent first few weeks of the offseason gave Elliott leeway to construct a team that will be more dominant than the 2021 squad, which held the nation’s highest hitting percentage and dropped a mere 16 sets in the season.

With former associate coach Erik Sullivan filling Johnson’s vacancy, three-time Olympic medalist and collegiate national champion Larson was hired by Elliot as Texas’ newest coach. As a captain for the 2020 U.S. Olympic gold medal team, Larson was named the best outside hitter and most valuable player in the competition.

For Texas, the trifecta winner will boost morale on a team that endured back-to-back heartbreaks in the championship tournament while providing invaluable status for Texas when recruiting. As a volleyball great that lives and breathes the sport, Larson has influence in both the collegiate and professional avenues that make her coaching coveted by current and prospective athletes.

As a coach, Larson’s all-around player experience should aid in Texas’ serve-and-pass game. Although the Longhorns were considered one of the most balanced teams this past season, programs such as Baylor and Washington exploited flaws in the back row and behind the service line. Larson’s 12-year career on Team USA gave the outside hitter exposure to America’s greatest volleyball coaches, and will bring bold recommendations to Elliott’s existing playbook.

With Larson’s hire at Texas Athletics sending shockwaves through NCAA volleyball programs, Skinner’s transfer from Kentucky as Fields’ replacement kindled speculation about Texas’ 2022 season in Twitter threads. While Fields’ impact on Texas’ front-row gameplay was significant as a two-time All-American, Skinner will shine bright as a player who can block heavy, hit efficiently and make scrappy digs from behind the ten-foot line.

At Kentucky, the outside hitter was the focal point of their 2020 championship team, posting 328 kills for a .384 hitting percentage as a freshman. Skinner’s ability to make plays only became more impressive as a contributor to the Wildcats’ No. 4 ranked hitting offense in 2021, securing her second All-America honor of her collegiate career.

Alongside Skinner, former UCLA libero Zoe Fleck will be an immediate game-changer for the Longhorns. Where Skinner will provide a spark to Texas’ already impressive roster of offensive playmakers, Fleck should alleviate some of the strain felt in the back row. During the tailend of the 2021 season, the Longhorns struggled to stay in-system and find ways to extend rallies, ultimately contributing to the loss against Nebraska.

The Longhorns will return All-Americans Logan Eggleston, Jhenna Gabriel and Asjia O’Neal in addition to All-Region honoree Molly Phillips. With difference-making transfers brought onboard and coaching changes in the previous weeks accompanying a stellar rookie class headed to Austin, Texas volleyball looks to be a frontrunner for the 2022 national title.