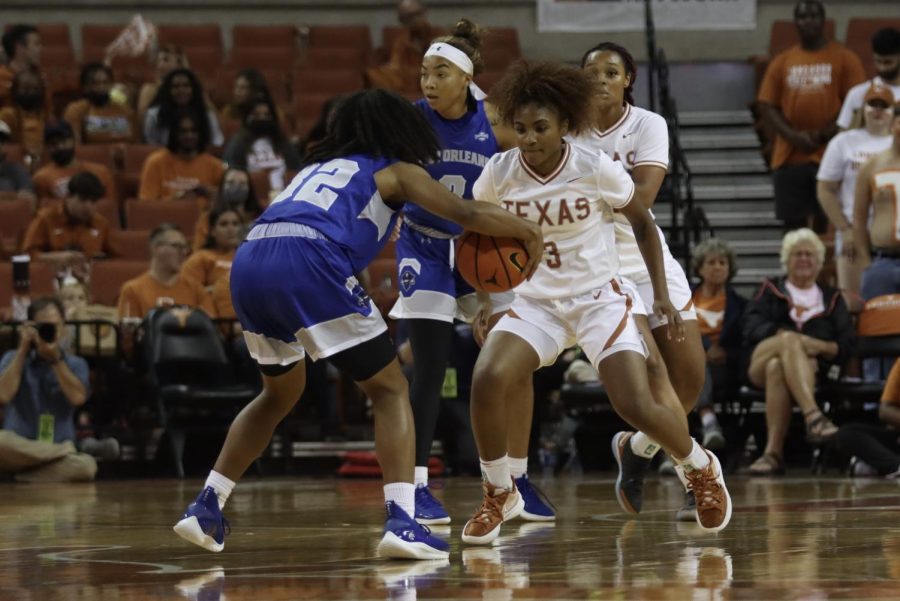 No. 15 Texas women’s basketball dominated with defense Saturday, travelling to Fort Worth to defeat TCU 68-47.

The win moved Texas to third in the Big 12 with a 14–3 record (4–2 in conference) and extended its winning streak to three games. The Longhorns are showing continuous success in road games, losing just one early in the season against No. 5 Tennessee.

“Obviously they put a really heavy emphasis on winning on the road,” Texas head coach Vic Schaefer said in a press conference before the game. “Our kids seem to be more locked in to be quite honest.”

Texas did look locked in, forcing TCU to play above the free-throw line, which created confusion for the Horned Frogs on offense. It led TCU to 19 turnovers throughout the afternoon. In addition, the Texas defense poked free eight steals, with three coming from freshman guard Rori Harmon.

Texas currently has two players ranked in the Top 10 for steals in the Big 12. The full-court press the Longhorns enforced after a make throughout the game allowed Texas to force more turnovers and frustrate the Horned Frogs, putting lead scorers in foul trouble..

Senior guard Joanne Allen-Taylor led the game in scoring with 14 points. Additionally, Allen-Taylor managed five assists and two steals of her own.

Senior forward Audrey Warren remained a momentum starter for the Longhorns, constantly putting her body on the line to make the play. Warren had 13 points off the bench and made two and-one plays.

Senior center Lauren Ebo also found success coming off the bench, with a season-high 13 rebounds and her second double-double of the year with 10 points scored. Despite freshman forward Latasha Lattimore being unable to play due to sickness, Ebo did an impressive job dominating the paint.

Junior guard Aliyah Matharu earned all of her points Saturday from beyond the arc. Shooting 50% from three, Matharu acquired nine points and had three rebounds. Matharu’s role on the team against TCU was to spread the court to create space and be an option from deep.

The Longhorns’ road stretch comes to an end this weekend as they look forward to a matchup against Kansas State on Jan. 26. The game will take place at the Frank Erwin Center with a 7 p.m. tip-off.