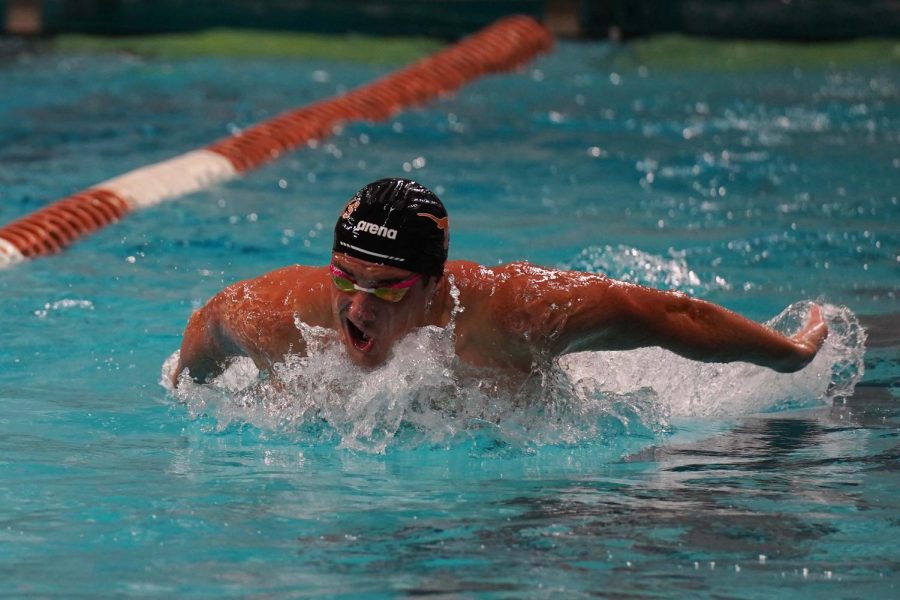 In the Texas men’s swim and dive team’s final home meet of the season, graduate student sprinter Cameron Auchinachie made a statement as one of the most dominant swimmers in the NCAA, adding individual and relay wins to the Longhorn’s 189-100 victory over the Horned Frogs.

In the dual meet this weekend, Auchinachie proved himself an All-American front-runner with his second win of the season in the 50-yard freestyle and his first in the 100-yard freestyle, swimming 19.74 and 43.32 respectively.

As a member of the 400-yard medley relay team of junior Caspar Corbeau, junior Cole Crane and senior Daniel Krueger, Auchinachie and team threatened the Lee and Joe Jamail Texas Swimming Center pool record with a time of 3:39:89. The New York product kicked off the medley with a 27.30 backstroke, putting the team a second ahead of the next closest competitor.

Krueger also made waves during the dual meet, falling milliseconds behind Auchinachie in the 50-yard freestyle and 100-yard freestyle. The senior holds the fastest NCAA 100-yard freestyle for the season with a 41.45 performance in December’s Minnesota Invitational and another time in the NCAA for his freestyle. The three-time All-American also secured three relay victories for Texas, performing exceptionally well in the 200-yard medley.

Texas broke another pool record at the tail end of Saturday’s session in the 800-yard freestyle relay. In the 7:14:37 performance, the team of senior Drew Kibler, sophomore Coby Carrozza, freshman Luke Hobson and sophomore Carson Foster blew past the previous top time by 10 seconds. The Longhorns currently hold the best time in the NCAA for the fastest short course performance in the 800-yard freestyle with 6:10:14.

On Feb. 4, Texas will compete in its final regular season match against SMU before competing for its fifth 26th Big 12 Conference Championship in Morgantown, West Virginia.