No. 9 Texas blows out No. 25 Kansas State behind Warren’s big night scoring 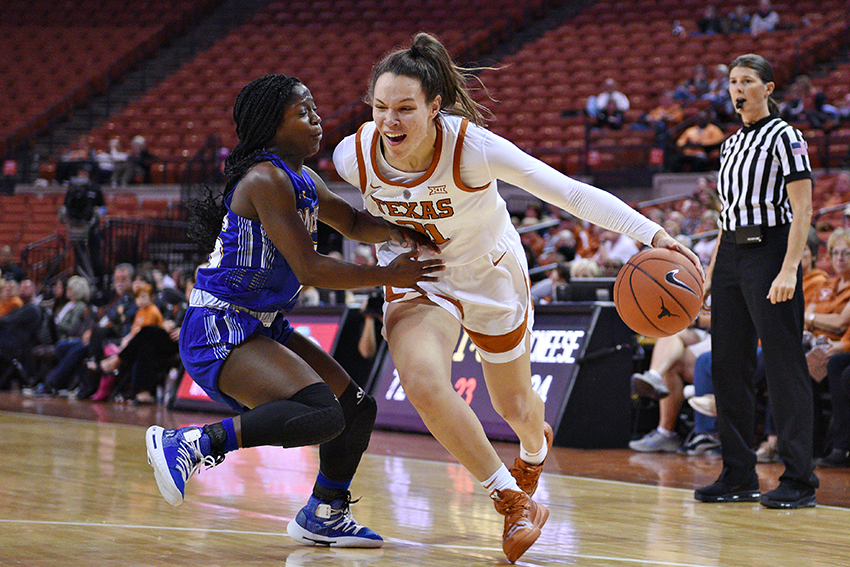 Midway through the third quarter, senior forward Audrey Warren moved around the floor trying to find the best positioning to pull up for a jump shot. With the shot clock running down, she had to make a play fast, but Kansas State’s zone defense was difficult to break.

As the Longhorns’ initial play didn’t work out, they were forced to improvise. Sophomore guard Shay Holle then got the ball on the perimeter as she looked for an open teammate. Holle fed the ball at midrange to Warren, who then pulled up for a shot with a defender right in her face. The shot drained in as the shot clock expired.

It was that kind of game for Warren, who just couldn’t miss at the Frank Erwin Center on Wednesday night as the No. 9 Longhorns blew out No. 25 Kansas State 66-48. Warren was near perfect from the field, shooting 8-of-9 with her only miss coming on a late fastbreak layup with 20 seconds left on the clock. Warren ended the night with 16 points, leading the bench in scoring.

“I just told my players, ‘When you make that baseline jumper, and you do go out there and make eight out of nine, and you can show me you can do that in a practice, then you’ll get an opportunity in the game,’” head coach Vic Schaefer said after the game. “Audrey has been working on her craft. She’s spent some time down here lately in the gym, which she needs to. When you do that, that’s what happens.”

Along with Warren, junior guard Aliyah Matharu had a big night on offense. Matharu had 18 points while shooting 4-of-9 from the 3-point line in the Longhorns’ win. Whenever Texas needed a big shot to maintain control of the game, Matharu was the one who answered with a 3-pointer.

It wasn’t just the offense that was clicking, however, as Texas’ defense was strong as well. Kansas State entered tonight coming off a game in which its star player, Ayoka Lee, scored 61 — a women’s NCAA record for a single game — of the team’s 94 points, but the Longhorns were not phased by her play.

Texas stuck to its roots, playing a full-court press and applying pressure to the opposing team’s ball handlers which held Lee in check for most of Wednesday night’s game. The Longhorns held the Wildcats to just 48 points on 34.7% shooting from the field and forced them to commit 19 turnovers.

“We knew that Texas would definitely (put us under) a lot more pressure,” Lee said. “It was something we were preparing for but just couldn’t really execute very well.”

It was an all-around great performance on both ends for Texas in this conference matchup. The team has now won four straight games since its loss to Kansas on Jan. 12.

The Longhorns will continue with a tough road ahead as they face another big matchup Saturday against one of their biggest rivals, No. 18 Oklahoma..

“One game at a time,” senior guard Joanne Allen-Taylor said. “Can’t look too far ahead. Just get the next one, that’s it.”