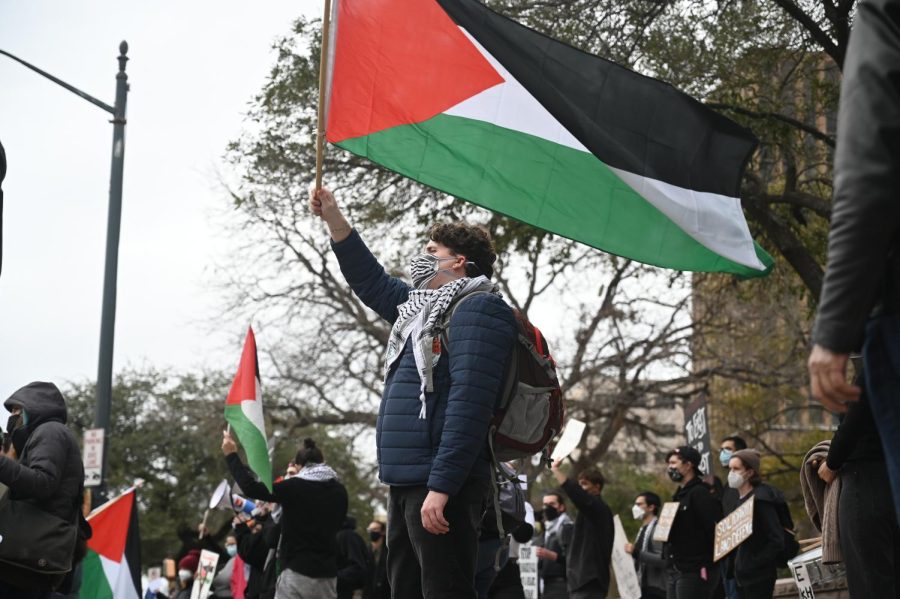 Nearly 50 UT students and community members gathered in front of the Texas capitol Sunday afternoon to protest the occupation of Palestine.

The student organization Palestine Solidarity Committee held the protest at the intersection of W. 11 St. and Congress Ave., and attendees included former Palestinian residents. Protestors chanted in English and Arabic and held signs reading “Save Sheikh Jarrah” and “We Will Remain.”

The PSC aims to spread awareness about the occupation of Palestine by Israeli forces and uplift the Palestinan narrative, a PSC organizer said. After two Palestinan families were evicted from their East Jerusalem neighborhood of Sheikh Jarrah by Israeli police last week, protests emerged around the world.

“We’re seeing, again, forced displacement, just like what we saw last summer, just like what we’ve seen 10 years ago, what we’ve seen since 1948,” said a fifth year PSC organizer who wishes to remain anonymous. “One of the biggest things that we saw was the Salhiye family being destroyed and being forced to leave their own home. We’re just here to uplift their voices, and to make sure that people aren’t forgetting about Palestine.”

The PSC plans to hold its annual Israeli Apartheid Week later this semester with cultural gatherings, guest speakers and movie screenings to bring attention to the conflict.

Rafael Tantau, a Jewish-Tunisian member of the PSC, said it’s important for Jewish individuals to bring the issue into their communities, hold discussions and fight misinformation on the occupation.

“Liberation, land rights and freedom of movement and access (are) a must,” Tantau said. “The things that are happening in the name of Judaism are negated by saying, ‘You can’t talk about it because it’s anti-Semitic.’ That’s ridiculous. Having more Jewish people involved in fighting
against apartheid regime is a must.”

The PSC organizer urged other students and members of the UT community to expand their understanding about the situation that Palestinians are facing.

“People try to not take a stance because it is a little too controversial,” the organizer said. “(It’s important) to really look into grassroots organizations like the PSC and the Palestinian Youth Movement and learn from them.”