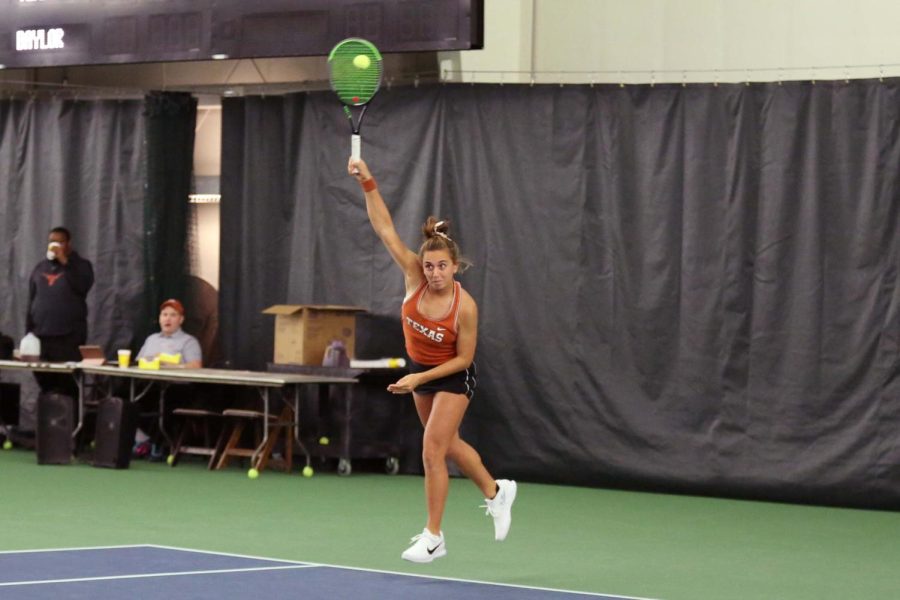 The Texas women’s tennis team faced Missouri in its Sunday match, emerging victorious in a 7-0 shutout against the Tigers at the Edgar O. and Melanie A. Weller Tennis Center.

Sophomore duo Kylie Collins and Peyton Stearns brought the heat against Missouri’s duo of Romary Cardenas Rifka and Valentina Vazquez Pongruber in a fiery 6-0 sweep to give the Longhorns momentum early on in the competition.

Not long after, sophomore Charlotte Chavatipon and freshman Vivian Ovrootsky’s consistent teamwork landed the duo a 6-2 win. As a result, Texas’ victory in doubles play was solidified, ending freshman twins Allura and Bella Zamarripa’s doubles match prematurely. After a short break, the Longhorns went into the six singles matches up 1-0.

Texas only continued to apply the pressure as singles play got underway.

Ovrootsky dominated the court, adding onto an impressive freshman season, going 6-2, 6-1 against Missouri’s Cardenas Rifka to bring Texas to a 2-0 lead.

On court 3, Chavatipon tipped Texas’ scale to 3-0 in her 6-1, 6-2 defeat of Missouri’s fierce Ellie Wright. The Longhorns only needed one more point to solidify the win.

Stearns ultimately clinched the victory for the Longhorns in a 6-3, 6-3 battle against Bronte Murgett, bringing the Texas team to 4-0.

After defeating No. 25 Baylor 4-2 last week and clinching a 7-0 win against Missouri this week, head coach Howard Joffe holds a 29-match win streak onward, currently 5-0 in his sixth season coaching for the Longhorns.

The women’s team looks to bring the same ferocity this weekend at the ITA National Team Indoor Championship in Madison, Wisconsin.