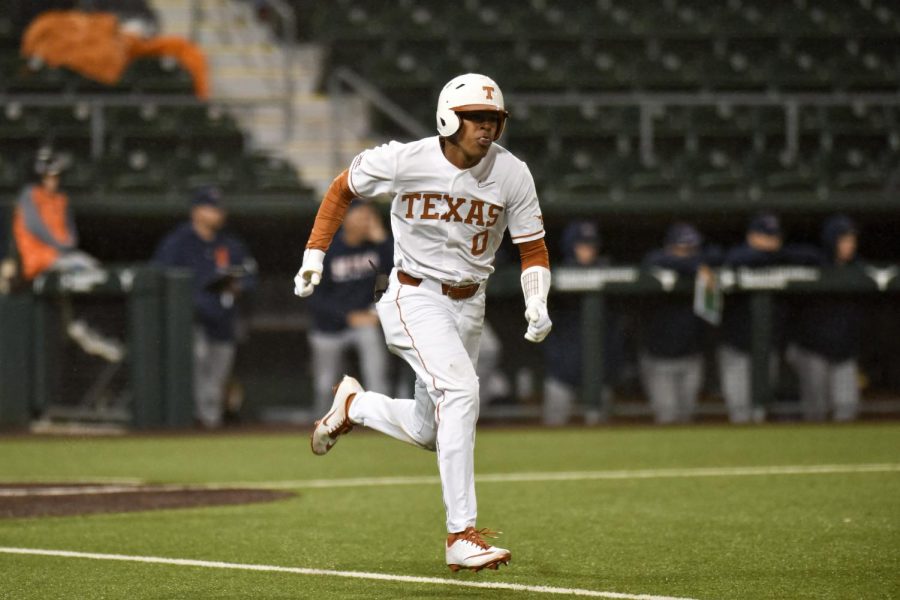 Editor’s note: This article first appeared in the Feb. 4, 2022 flipbook.

On June 26, Longhorn baseball fans erupted in chants of “Texas Fight” as sophomore Cole Quintanilla took the mound. Despite the two losses to Mississippi State earlier in the season, many had their money on Texas to win the semifinal in Omaha for their 13th trip to the College World Series final.

However, a chance at their first national championship title since 2005 wasn’t in the cards for the Longhorns. With one out in the bottom of the ninth, the Bulldogs’ Tanner Leggett hit an RBI off Quintanilla’s slider for the walk-off win to top Texas 4-3.

Nearly eight months after the devastating loss in Omaha, preseason No. 1 Texas baseball has fully embraced 2022 as their revenge season.

“We’re definitely hungry and we want to win,” said redshirt sophomore Trey Faltine. “Having that taste in your mouth from last year and being so close … we want to prove to everybody else and prove to ourselves that we are capable.”

Faltine, who is considered to have one of the best gloves in the NCAA, fielded a .968 last season as Texas’ starting shortstop. But he is also a team leader. Emerging as a media personality over his college career, he has kindled spirit in a program that already plays best when the lights shine the brightest.

“He’s got a ton of energy,” head coach David Pierce said. “He just never stops and loves being at the ballpark. He loves baseball; he loves working.”

Texas baseball also holds leadership in the pitching staff. Despite All-American pitcher Ty Madden and Quintanilla departing to pursue professional baseball, redshirt senior Tristan Stevens returned for one last dance at UFCU Disch-Falk Field to improve his draft stock and pursue some “unfinished business.” Last season, the preseason All-American worked his way into the weekend rotation and led the team with an 11-3 record on the mound but wasn’t drafted to a professional team.

“It was a no-brainer (to come back),” Stevens said. “I see myself (as) more valuable to this program. We want to build that standard for years to come because last season wasn’t a one-and-done.”

Catcher Silas Ardoin is supporting weekend starting pitchers Stevens, redshirt sophomore Pete Hansen and sophomore Tanner Witt. Witt, who emerged from the bullpen to start on the mound, attributes Ardoin’s pitch calling with his comfort in his new position.

Texas baseball caught another lucky break in 2021 as designated hitter Ivan Melendez opted to return to the Forty Acres despite going in the 16th round of the MLB draft. However, Pierce plans on moving the redshirt senior to first base, raising one of the few questions surrounding the preseason No. 1 team.

“(Melendez’s) skill set of picks and footwork and ground balls is really good,” Pierce said. “I think it’s more about alignment, positioning, decision making — and that piece is coming along.”

With the seven preseason All-Americans in Melendez, Faltine, Stevens, Hansen, Witt, Aaron Nixon and Mitchell Daly, No. 1 Texas baseball looks to have no major gaps to fill in its pursuit of the 2022 title. However, Stevens says there isn’t any added pressure with the preseason accolades.

“If you come to the University of Texas, you know (what) you’re getting yourself into, especially for this baseball program,” Stevens said. “Kids come here to get those expectations — you should know that going in. And if you don’t, the University isn’t for you.”