Longhorn fans get first glance, insight into competition within No. 1 Texas baseball at Alumni Game 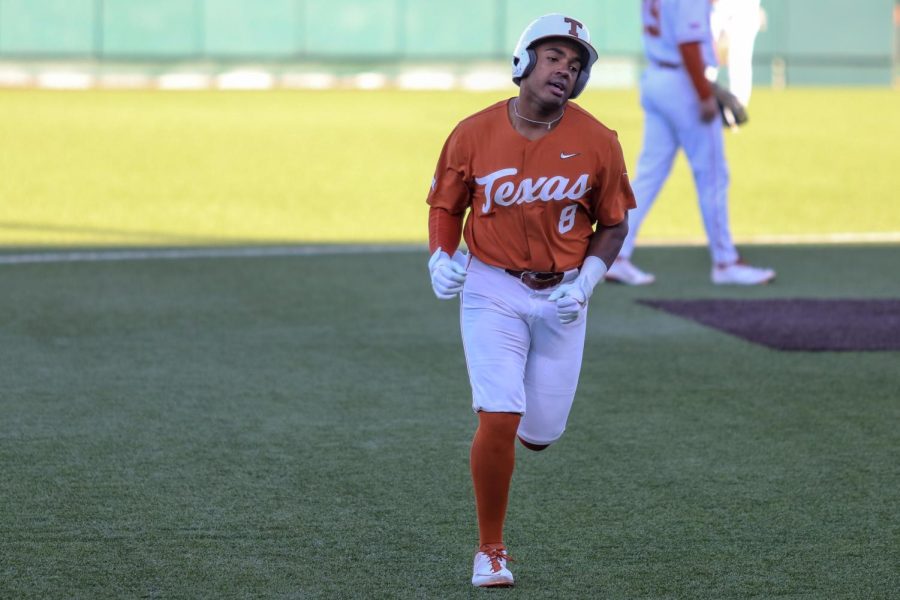 UT Baseball sophomore Dylan Campbell making his way around the bases after hitting a home run during the Alumni game on Saturday, February 5, 2022.

Editor’s Note: This article first appeared in the Feb. 8, 2022 flipbook.

An hour before No. 1 Texas baseball would play its alumni in the annual Alumni Game, facility workers chipped away at the hardened ice on the bleachers just before spectators were let through the gates at UFCU Disch-Falk Field. Despite the recent winter storm that had passed through Austin, the weather cleared just in time for fans to bundle up in blankets and welcome alumni back to the Forty Acres.

Historically, the Alumni Game is an opportunity for fans to interact with current and former Longhorn ballplayers as part of Texas’ annual Fan Appreciation Day, which includes autograph signings and photo opportunities with athletes. However, the game doubled as a source of insight into internal competition before the start of the season.

With redshirt junior Ivan Melendez moving out of his designated hitter role to first base, both redshirt senior Murphy Stehly and sophomore Dylan Campbell started at designated hitter for Texas and Texas alumni, respectively. The competition between the two hitters quickly turned the game into an offensive power struggle, with the alumni eventually taking it 8-6.

“That competition is really healthy for us,” head coach David Pierce said. “It makes me excited because now it gives us another option. (Campbell) is a young man that’s fighting to be an everyday starter.”

In Campbell’s start for the alumni team, the sophomore carried the old-timers and struck out only once in his five times at bat, hitting a homer in the second inning and recording a double, two singles and three RBIs on the night.

“Dylan Campbell (was) probably a bad trade by me because he had a great day,” Pierce said. “But we’ve always felt like he could get to the top of that order.”

For Texas, Stehly blasted sophomore pitcher Lucas Gordon’s fastball past center field for a statement home run in the third inning, putting the home team on the board. While Stehly did not record any other statistical hits on the night, the California product sent out a sacrifice fly to bring redshirt sophomore catcher Silas Ardoin home in the fourth.

The alumni team featured the likes of 2021 draftees in Zach Zubia and Mike Antico, who were competitive in their return to the Forty Acres. The pair combined for two scores on the night and engaged in some trash talk with Tristan Stevens, former teammate and redshirt senior pitcher, after Zubia grounded out in the first inning.

Former Longhorn shortstop David Hamilton also showed out Saturday. During his time at Texas, Hamilton was named to the All-Big 12 second team and was drafted in the eighth round of the MLB Draft in 2019. Hamilton recorded two hits and was involved in a double play that outed redshirt junior outfielder Eric Kennedy.

“They’re all young, and they’re either breaking through or getting started. They’re in shape,” Pierce said.

Before the start of the game, second baseman Kody Clemens, first baseman Kacy Clemens and Roger Clemens, their father and former MLB pitcher, snapped a picture, recognizing the legacies in Texas baseball.

“It’s just good to see our guys,” Pierce said. “This is one special place.”