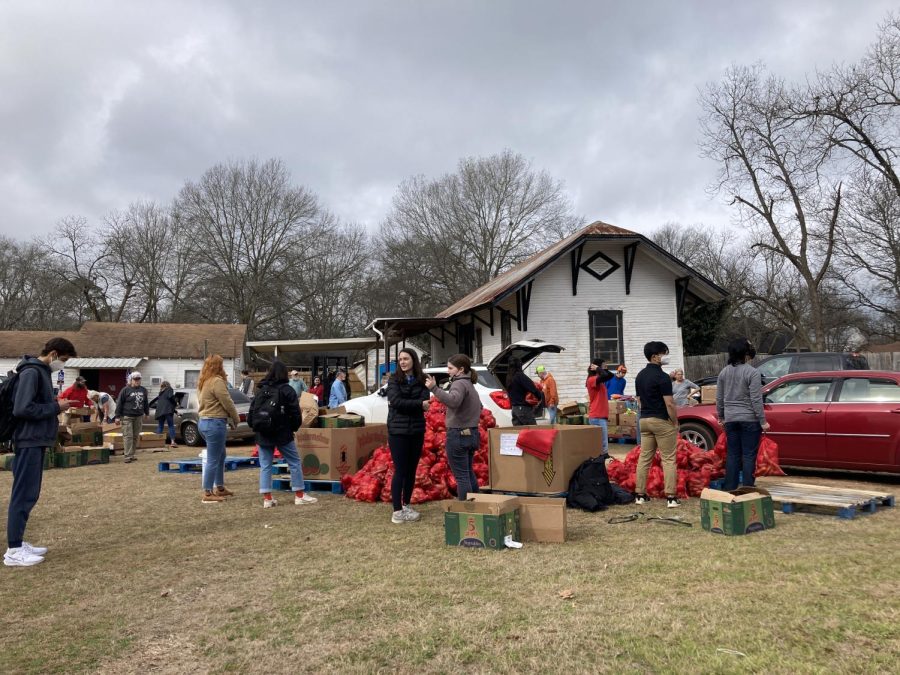 Editor’s Note: This article first appeared in the Feb. 8, 2022 flipbook.

A group of UT engineering students walked through a dark and deserted campus in the early morning hours of Feb. 2. Their bus would leave at 3 a.m. for Rusk, Texas, where they were to survey the site for a new food pantry they’d design themselves.

Once aboard the bus, the roughly three-and-a-half-hour drive to Rusk was mostly silent aside from a quick exchange of pleasantries and coffee and donuts the students’ professor provided. Most everyone fell asleep, but when they awoke they’d arrived at the Good Samaritan Food Pantry and Thrift Store, where staff greeted them with breakfast tacos.

Then the work began.

Designing a new facility for the Good Samaritan serves as a capstone project for 28 engineering students, each belonging to one of three degree plans: civil engineering, environmental engineering or architectural engineering. Each engineering undergraduate student must take a two-semester-long capstone course in order to navigate real-world problems with the tools they’ve learned. Heidi Ross, engineering lecturer and capstone co-instructor, said this year is the first time the three engineering degrees and their respective capstone courses have come together for one project.

For civil engineering senior Olivia Toth, this project provides the unique experience of working with student engineers from other degrees.

“I get to work with an environmental group, and they are going to take care of the wastewater treatment and stuff like that,” Toth said. “The architectural engineers are in charge of the actual buildings and the aesthetics and the internal parts of the building. I just figure out the square footage of the building and exactly where it’s going to go, and they do the rest of the building.”

Bob Gilbert, professor for the civil engineering capstone, said the Good Samaritan Food Pantry and Thrift Store first reached out for help designing a new location near the end of last semester.

“I needed someone to do a rendering for us because we have an idea of what we wanted in our pantry … and we need to borrow money, but you can’t borrow money unless you have solid numbers and a tangible drawing for them to look at,” said Mona Burford, Good Samaritan public relations director and former president. “So I contacted my son, who actually works at UT. And then I get a call from him the next day and he says, ‘You’re not going to believe this, Mom.’”

The Good Samaritan Food Pantry and Thrift Store has served the Rusk community for over 25 years in various locations, starting with a church closet. The Rusk population is a little over 4,000 people, but along with the additional people who drive in to use the pantry, Burford said the facility helps nearly 5,000 people a year.

Burford said food distribution currently operates out of a small warehouse, where families can get everything they need by driving through.

“We have volunteers that come in and they help us unload the (supply) truck,” Burford said. “The cars drive through and vehicles are loaded from both sides by volunteers with produce and boxes of food. The boxes of food weigh about 45 pounds, … and then on top of that we give them about 15 to 20 pounds of frozen meats. And then they get … whatever produce that comes in on the truck.”

While Burford said families love the drive-thru, their current facility is “substandard” and in need of an upgrade. The new food pantry location will include a resource area, medical office, training lab with computers, learning kitchen and new thrift store.

In designing a new facility, Gilbert said the engineering students have to ask themselves a variety of questions.

Toth said she felt a mixture of excitement and intimidation during the trip to see the new food pantry location.

“Seeing the new site, it’s definitely daunting because it’s truly just dirt and trees,” Toth said. “And … it’s on a slant, which makes it easy for drainage but then difficult for actual development. And the dirt isn’t ideal for a foundation or pavement, so we’re going to have to do some work regarding that.”

Though the task may seem daunting, Gilbert said each team in the capstone program consults with two engineering professionals, who mentor the group and help supervise their progress.

“So not only are these real projects, but the engineering that the students are doing is solid engineering, because we’re making sure that people who actually do this for a living are looking over their shoulders,” Gilbert said.

In addition to design help from UT students, the Good Samaritan has received financial support for their new location from the Rusk community. One family donated $50,000 in honor of their late daughter, who loved the food pantry.

“She loved coming down here when she was alive, and she loved the camaraderie and she loved the volunteers that were here,” Burford said. “It felt like home to her. She didn’t need it, but she would come home with giant cabbages saying, ‘Look at this cabbage I got,’ and she’d be so proud of it.”

Toth said she felt touched by the hospitality of the food pantry volunteers. She said Burford and her colleagues decorated, set up and served the students barbecue for lunch when they came to survey the site.

“It just feels like a really tight-knit community,” Toth said. “Everybody knew each other, all the volunteers knew each other. So it was really cool to just be invited into that and be a part of that for a day.”

Gilbert said his students’ main objective for the semester is creating a finalized design for the facility that the Good Samaritan can present to potential donors and submit for construction permits. Burford said she hopes to have concrete laid down at the new location in the fall.

“We teach what it means to be an engineer and how you have an obligation to serve the public,” Ross said. “We do these community service projects to really live up to our goals as civil engineers and show them that this is why we do what we do to make the community a better place.”