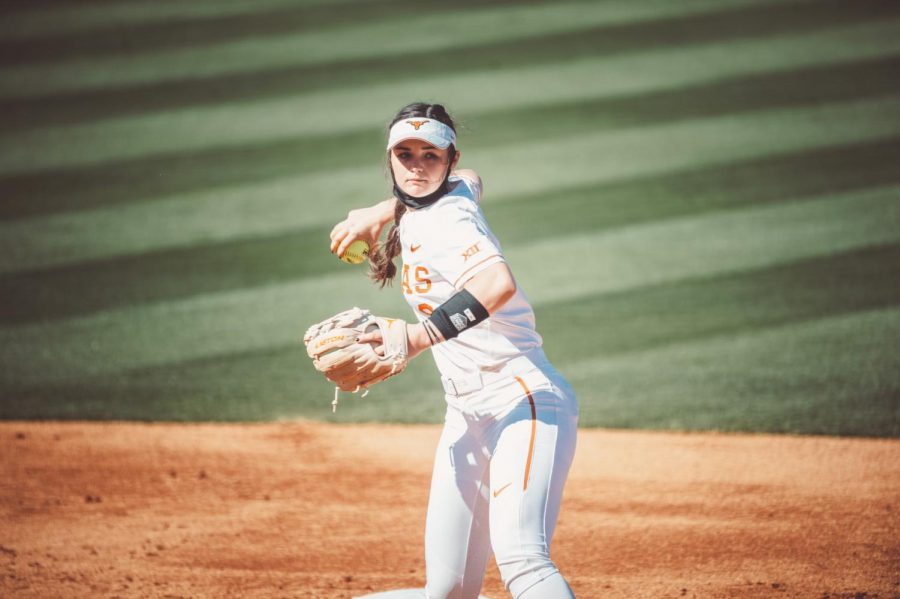 Entering their spring season, the No. 10 ranked Texas softball team brought the heat in Fort Myers over the weekend, competing in five matchups for the Florida Gulf Coast University Kickoff Classic.

The Longhorns began the weekend by improving to a perfect 26–0 record for season openers with a 4-0 victory over No. 15 Clemson on Friday. It was the team’s first season-opening win against a ranked team since 2014.

Senior second baseman Janae Jefferson opened the game with a single and, shortly after, made her way to third base. With the assistance of junior shortstop McKenzie Parker and her RBI single through the right side, Texas gained a 1-0 lead. The duo’s energy stood prominent with Jefferson sitting at third once again and Parker managing another RBI single, bringing the lead to 2-0.

Texas wasn’t so successful against FGCU, falling 6-4 against the Eagles at their home field.

Jefferson started the Longhorns off with a leadoff walk, moving to second base on a sacrifice bunt and taking third on a passed ball. Runners were placed on both corners after Parker gained a free pass, and senior catcher Mary Iakopo managed an RBI single to center field to bring Texas to a 1-0 lead.

FGCU climbed their way up to tie with Texas 2-2 after pitcher Emily Estroff threw a triple to the right just inside the chalk. To follow, shortstop Reedy Davenport came in with a double down RBI into the left field corner and scored on a wild pitch to bring the Eagles up 4-2.

Texas’ attempts to recover the lead were unsuccessful, and the contest ended with a score of 6-4.

But Saturday brought a wave of success for the Longhorns with a 7-0 shutout against Boston College and a 10-2 comeback win over FGCU.

Iakopo stepped up to launch a two-run home run to left center, starting the game against Boston College off with a 2-0 lead. Sophomore transfer Logan Hulon made an impressive first appearance as a Longhorn by striking out two and retiring six of the first seven batters she went up against.

Sophomore transfer Brianna Cantu walked in a run to bump the Longhorns to 4-0 and contributed her third and final RBI, sending a solo shot through the center to finalize the 7-0 victory.

Texas’ rematch against FGCU quickly turned into a back-and-forth bender with the Eagles beginning with a 1-0 advantage that would soon turn into a 4-2 Texas lead after Dayton’s RBI double to left center.

The Longhorns’ offense continued to stand tall into the sixth inning as the team added three more runs to their 7-2 lead to reach a double digit score, ending the game at a 10-2 victory.

Due to inclement weather, instead of facing Kent State, Texas played against Boston College once again, coming out on top with a 5-0 sweep to end the weekend with admirable performances by Parker, Iakopo and Washington.

Texas looks to continue their success as they face McNeese State at the Red & Charline McCombs Field on Wednesday, Feb. 16.