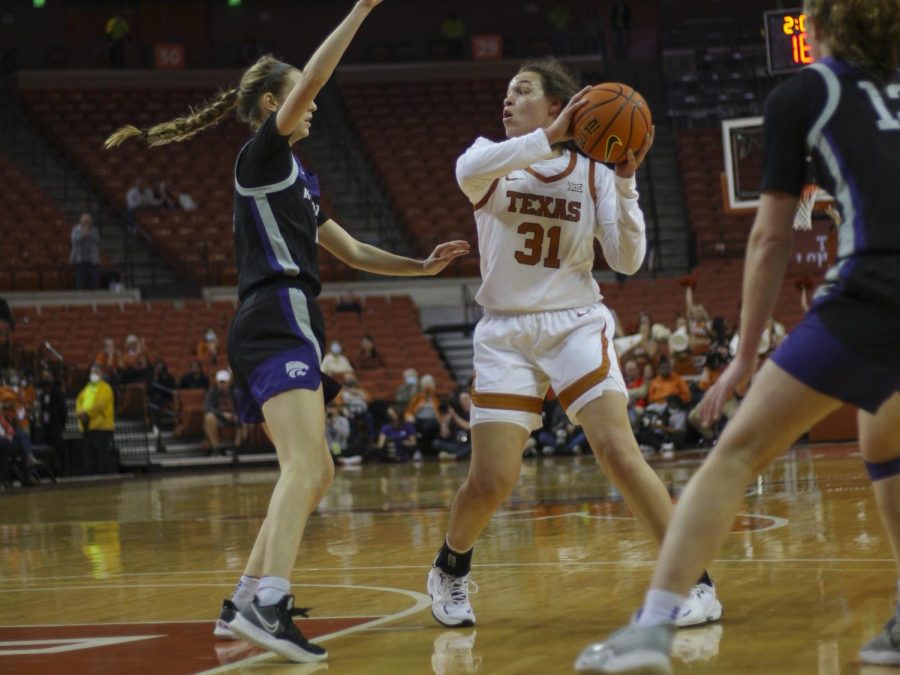 The No. 16 Texas women’s basketball team defeated No. 12 Oklahoma at home, evening up the series record this season against their rival. With the win, the Longhorns move to 17-6 and No. 5 in the Big 12 standings.

Having lost the first meeting between the two teams, this game meant something more to Texas. Senior forward Audrey Warren said despite her mother being a Sooner, she was determined to win.

“I told the team before that I did not want to lose to Oklahoma again,” Warren said. “I think they heard that loud and clear.”

The Sooners started off the game strong, maintaining the lead through the first two quarters. Texas struggled to keep energy in the first half, but improved their ability to find people and get back in transition after halftime.

Texas head coach Vic Schaefer said that the message at halftime was to stop turning over the ball, which they did 10 times in the first quarter. “I’ve never had a team turn the ball over 40 times before,” Schaefer joked after the game.

Coming off the bench, Audrey Warren led the Longhorns in scoring with 21 points and was focused from the line, sinking all of her free throws. She’s earned the chance to be a candidate for sixth player of the year for the Big 12.

“It’s really a matchup more than anything with this team,” Schaefer said. “Where Audrey matches up, she usually gets everybody’s best offensive player.”

With multiple players making a difference for the Longhorns, four players scored in double digits. Senior center Lauren Ebo held her own as an effective offense. She earned her third double double of the season with 13 points and 14 rebounds, nine of which came offensively.

“Lauren’s playing a lot better today than she was a month ago,” Schaefer said. “She’s down there every night battling her tail off, I mean really competing,” Schaefer said.

Senior guard Joanne Allen-Taylor capitalized offensively yet again this game with 14 points. She’s fulfilled her role as a leader nicely, and Coach Schaefer said that players need to watch Jo.

“She plays so hard and does everything else that you want a kid to do,” Schaefer said.

“Shay’s been steady, she works hard, her shots are falling,” Schaefer said. “I think everyone knows she’s probably the most athletic kid on the team. She’s certainly the fastest.”

Holle finished the game with 10 points on 5-7 shooting. In addition, she had three steals.

“We did not settle today like we did in Norman,” Schaefer said. “We really attacked them in spots that we wanted to attack them.”

Looking forward, the Longhorns will take on another Big 12 powerhouse team in No. 9 Iowa State on Feb. 16 at the Frank Erwin Center.