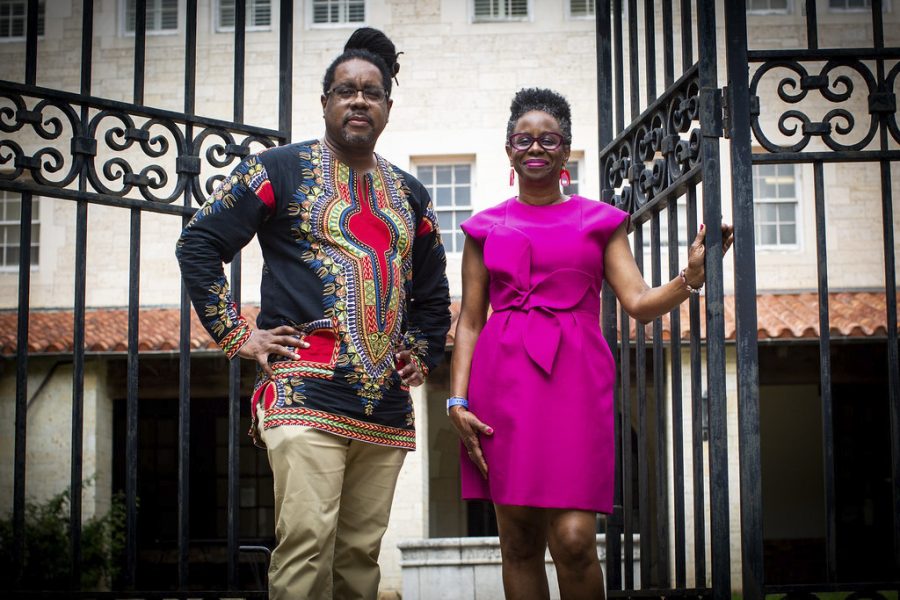 On most days, Austin’s Congress Avenue appeared merely as any other long strip of dark asphalt. However, in June of 2020, the ordinary pavement transformed into a glimmering art piece adorned with large bright yellow letters spelling out “Black Austin Matters.” Onlookers stood grouped along the sidewalks, taking in the work of many local Black Austin artists. One among the crowd, Richard Reddick said the scene sparked an incredible idea.

After seeing the mural in June of 2020, Reddick, UT’s Associate Dean for Equity, Community Engagement and Outreach, tweeted a call to action: “I think it’s good for us to talk about what being #BlackInATX is actually like.”

From there, Reddick and Lisa B. Thompson, Professor of African and African Diaspora Studies, participated in a Twitter exchange which led to the creation of KUT and KUTX studios’ new podcast — “Black Austin Matters,” which premiered Jan. 5.

Released the first Wednesday of every month, “Black Austin Matters” highlights members of Austin’s Black community. Each episode discusses a wide range of topics, from deep-rooted lineage in Austin to police reform, with the moderation of co-hosts Reddick and Thompson. Designing the podcast to be by Black Austinites for Black Austinites, the two said they talk about issues that are important to them.

“We have opinions about everything, not just a Black thing that happened that is traumatic,” Thompson said. “We are multidimensional people. If you’re hearing from your African American neighbors (about) who they are, you’ll understand their perspective on life, and that was important to me.”

Reddick said the variety of guests featured on “Black Austin Matters” allows them to break down stereotypes and honestly discuss what being Black in Austin feels like, in all of its complexity and variety.

“Black Austin is all the identities we talked about, and we intersect in so many different ways,” Reddick said. “There are people who may not be terribly immersed in a certain part of town, or (have) a certain way of thinking or political leaning. If you’re Black, you’re a Black Austinite.”

Reddick said each guest brings a different perspective of what it means to be Black in Austin, sharing negative experiences and criticizing Austin while also showcasing the love they have for their community.

“It’s interesting to hear how they come to understand their identity and their roots in this place,” Reddick said. “People might have critiques but generally have affection for this community.”

Additionally, Teresa Frontado, executive news editor of KUT, said the podcast was designed to serve and showcase Black Austinites, not be an explainer of Black culture in Central Texas for those outside of the Black community.

“If it has the additional benefit of resonating with other communities, then that’s great, but it’s meant to reflect the concerns and the lives of this community,” Frontado said.

Reddick said the podcast is ultimately a way to show love to the unique Black community in Austin.

“We’ve often called (the podcast) a love letter to the Austin Black community we’re a part of,” Reddick said. “We (want to) look into the folks who are part of the everyday experiences because we’re complex people. We’re not always leading marches and passing laws. It’s an attempt to bring the full dimensionality of Black life in Austin to the forefront.”