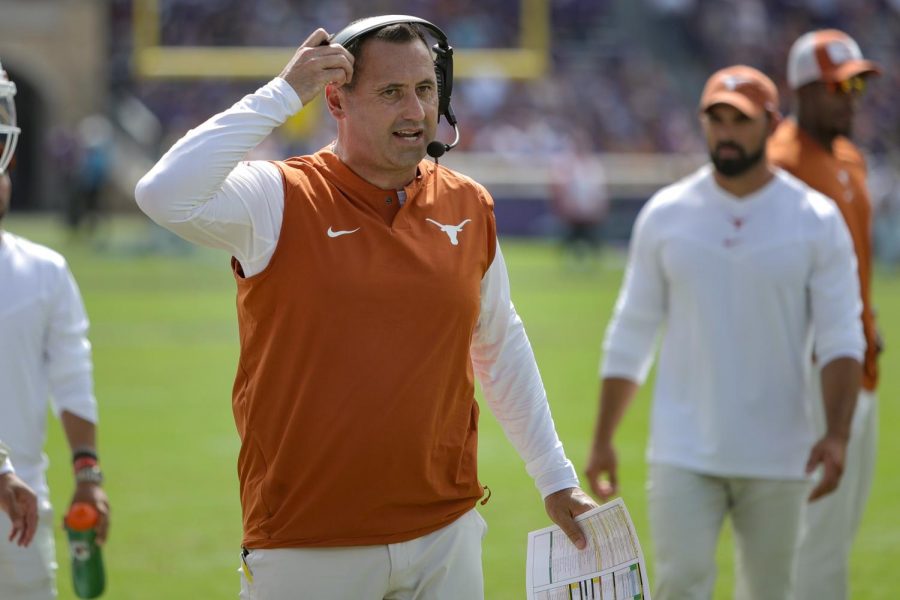 Texas football added a single player to its list of 28 new recruits on Feb. 2, the final signing day of the 2021-22 cycle. This decision leaves the Longhorns with the No. 5 recruiting class in the nation.

The class holds seven offensive linemen, including five-star offensive tackle Devon Campbell, the sole signing day commitment, and Kelvin Banks, who signed Dec. 15. During the 2021 season, the offensive line revealed itself as a downfall for a Texas offense that relied heavily on running back Bijan Robinson. With the Longhorns signing just two linemen in the 2021 recruiting class left behind by former head coach Tom Herman, current head coach Steve Sarkisian said putting the soon-to-be freshmen on the field next season would not be out of the question.

“The offensive line position is probably one of the more challenging positions to play early at,” Sarkisian said. “Whoever they are (that get playing time), they’ll earn it. But we’re not closing the door on that. We’re going to give these guys every opportunity to compete, and compete at a high level.”

Texas also beefed up its receiving corps during the recruitment cycle, which had been hampered by departees and injuries — redshirt sophomore Jordan Whittington’s clavicle injury in early October forced true freshman Xavier Worthy to carry the load for much of the 2021 season. The Longhorns welcomed transfer Isaiah Neyor in January, who previously played for Wyoming. The junior wide receiver provides another offensive threat for Texas, with 44 receptions averaging for 20 yards last season for the Cowboys.

Tight end Jahleel Billingsley, who officially transferred to Texas from Alabama on Jan. 19, could also be a key piece in diversifying Sarkisian’s offense. The junior had 17 receptions averaging 15.1 yards in his 2021 season with three touchdowns. Sarkisian hopes the additions will create a difficult offense to defend.

Texas also nabbed quarterback Quinn Ewers in the transfer portal from Ohio State. While the freshman went on the field for just two plays for the Buckeyes, buried on the depth chart behind C.J. Stroud, he was the top ranked quarterback in the 2022 class before reclassifying to join Ohio State a year early. The Texan will compete for the quarterback position in his home state against Hudson Card. Sarkisian said Ewers is settling into his new home well.

“I think being in the dorm, being one of the guys again and being at a place that I think, in his heart, he kind of always wanted to be at, I think he’s in a really good place,” Sarkisian said.

While signing day wrapped up the majority of recruiting for Texas, a few spots remain available on the roster to reach the estimated 35 newcomers that he predicted for the offseason. Sarkisian said he would like to fill them with an additional safety, inside linebacker or wide receiver, but didn’t seem rushed to do so.

“There are spots there that we could fill if the right person presents himself,” Sarkisian said. “But I’m not just going to take a guy to fill the number, I want to make sure that player can come in here, and potentially have the ability to contribute to the team where we want to go.”