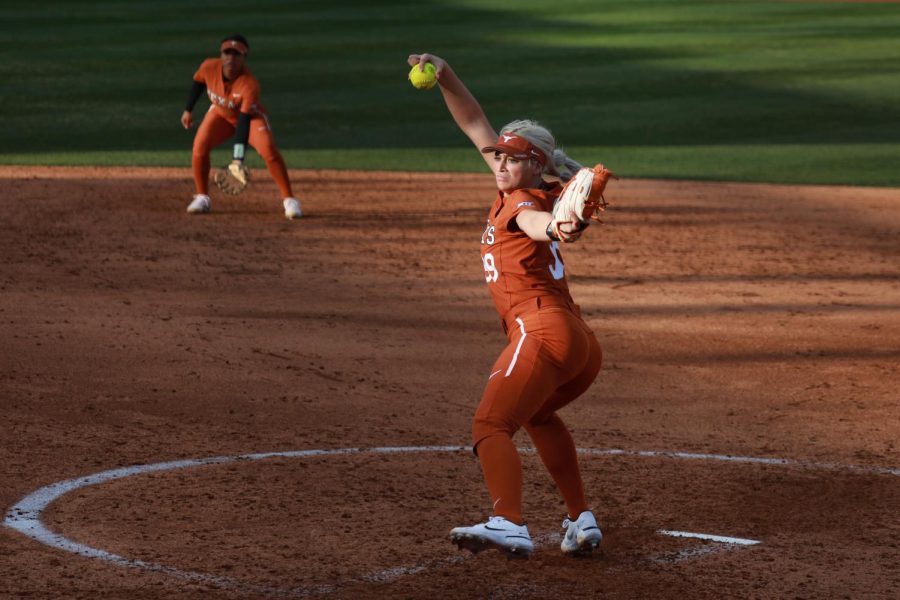 In Texas softball’s home opener, freshman pitcher Sophia Simpson dazzled with an impressive performance on the mound, and freshman infielder Mia Scott tied a school record for the most triples in a game in the Longhorns’ 8–4 win over McNeese State at McCombs Field.

Simpson enjoyed her first home experience, with friends and family in the stands to cheer her on.

“My aunt, my mom and dad, two of my best friends (were here),” Simpson said. “I’m just trying to make them proud always.”

Simpson’s mom was also a pitcher, which she said pushes her to constantly strive to better her game.

Simpson certainly made her family proud, finishing the day with 4.1 innings pitched, six hits allowed, one earned run and nine strikeouts, putting on a clinic against McNeese St. in her collegiate debut. Simpson’s command of the strike zone and use of off-speed pitches was too much for the Cowgirls as they never seemed to get comfortable in the box against Simpson.

“I just had to have the same mentality as I did in high school,” Simpson said. “(In high school) I pitched on my own time at home afterwards. Here I have so much more time and the resources to do it all … it’s a lot easier.”

Simpson did face some adversity in the fourth inning, as McNeese St. managed to load the bases with one out. Simpson kept her cool, striking out the next batter and forcing a ground ball to third base for the final out of the inning.

“I’ve been in that situation before and I know I can get out of it,” Simpson said. “I just have to trust myself and my teammates always.”

Scott also impressed at the plate today, showing off her blazing speed by tying the school record for most triples in a game with two. Scott is the fourth Longhorn to hit two triples in a game, already making her mark on the Texas record books.

Unforced errors were rampant for McNeese St. as the Cowgirls couldn’t seem to get out of their own way in Wednesday’s game. McNeese St. had 3 errors on the day, leading to several unearned Texas runs. McNeese freshman right fielder Erin Ardoin, sister of Texas catcher Silas Ardoin and Texas commit Sam Ardoin, had a tough day in right field, accounting for one error and several bobbled softballs herself.

Texas preyed on McNeese St.’s errors, as clever baserunning and the threat of Texas’ hitting led to three stolen bases in the game.

McNeese St. began putting up a fight, scoring two runs in the top of the fifth inning. However, it was too little too late for the Cowgirls as the six-run Texas lead was too substantial to overcome so late in the game with how the Longhorns were pitching. The Longhorns’ win moves their record to 5–1 on the season.

Texas will only be in Austin briefly as the team travels back to Florida this weekend for the St. Pete/Clearwater Elite Invitational. The Longhorns kick off the tournament on Friday against the No. 5/6 Florida State Seminoles.