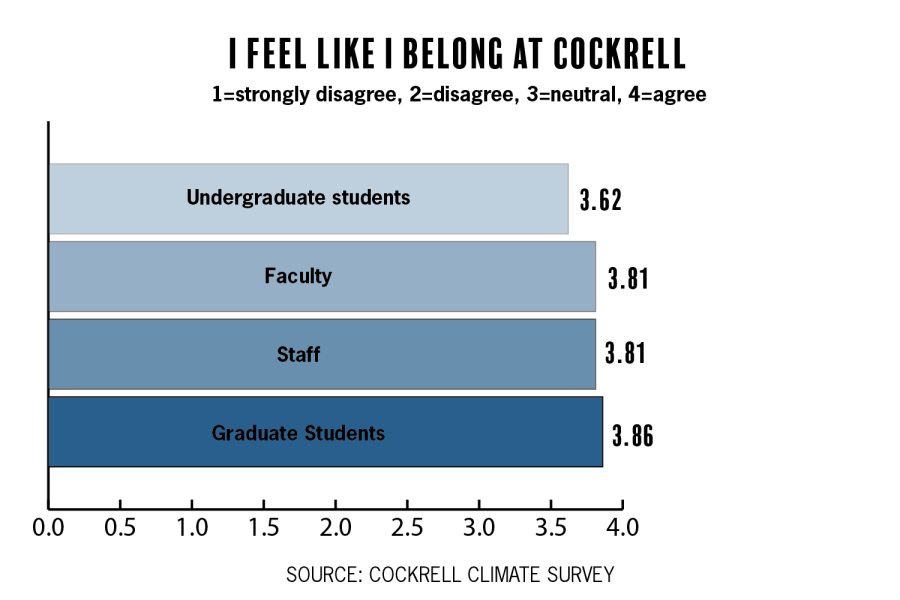 The Cockrell School of Engineering released its 2021 climate survey report Feb. 1, which showed some engineers, including women and people of color, felt the college’s climate wasn’t inclusive for them.

The report compiled data and personal anecdotes from a climate survey that the college administered in March 2021. The report organized data into three key themes: diversity imperative, climate and belonging, and COVID-19 social distancing. The report also contained summaries, recommendations and next steps for the school.

Mechanical engineering professor Maura Borrego, who prepared the report, said the survey revealed discrepancies in the experiences of people with differing identities within Cockrell. She said looking at these differences would help the school fix them.

“Some people think that this is the best, most supportive place that they’ve ever been in their careers,” Borrego said. “It’s great for those folks, but there are others that are seeing a lot more barriers.”

“That’s so much more important than anything quantitative because when I look at the data, it’s not groundbreaking,” Jaecks said. “I like hearing people’s actual statements because you can hear … people’s opinions on what works, what doesn’t, where we are now, where we need to be.”

The recommendations listed in the survey include seeking opportunities to diversify collaborations, starting conversations about diversity and bringing diverse perspectives to the classroom. Jaecks said the recommendations seemed easy to follow.

“I’m always looking for action items, and that’s what I’m seeing in the recommendations,” Jaecks said. “The faculty section has the most recommendations, which makes sense because that’s where you’re going to see systemic change coming from.”

Borrego said while she thinks the results of the survey are important, she hopes that people focus on making changes to the school itself.

“I hope we balance (the survey) with … doing the real work of dismantling the systemic racism that we have in higher education,” Borrego said.

Environmental engineering junior Sneha Sundar said that as vice president of outreach of the Society of Women Engineers, she strives to make her organization inclusive. However, she said the school itself should do more to create a welcoming environment.

“Student organizations can only do so much because it’s run by students and we have school,” Sundar said. “I think it all goes back to the entire Cockrell School and the amount of effort they put into making each person feel like they belong.”

Sundar said because Cockrell students have similar goals, they should focus more on a sense of community.

“We’re all engineers, and we’re all stressed all the time and nobody sleeps,” Sundar said. “That should be something that bonds us together, and everyone should feel like they belong and shouldn’t feel isolated because at the end of the day, we’re all here to get a degree and get a job.”