Fueled by Ardoin’s hitting, No. 1 Texas baseball cruises to 7-0 victory in season opener 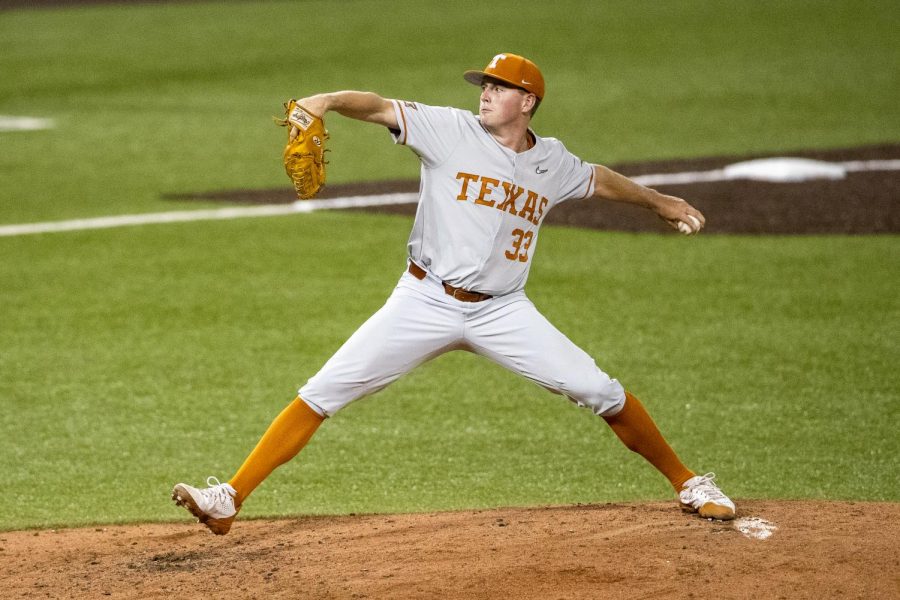 Around 200 days after a 4-3 season-ending loss to Mississippi State, No. 1 Texas baseball was back in action against Rice on Friday night. The Longhorns rolled to a dominant 7-0 victory to take the first game of the 2022 season.

Redshirt sophomore catcher Silas Ardoin was an offensive star in Friday’s game, recording the season’s first home run in the second inning and three total hits on the night.

Head coach David Pierce said yesterday that Longhorn fans can expect to see a “true hitter” in Ardoin this year.

“The approach hasn’t changed much,” Ardoin said. “Just getting a little more aggressive because I trust myself more, especially coming in for a third year.”

The catcher also impressed defensively behind the plate, throwing out a runner who attempted to steal in the top of the eighth.

“I have a feeling that I am going to throw them out a lot of the time,” Ardoin said. “I know my pitchers have trust in me to throw (runners) out, so it takes a lot of pressure off of them.”

In his first appearance since the game against Virginia in last year’s College World Series, redshirt sophomore pitcher Pete Hansen got off to a hot start.

Hansen made quick work of the top of the order in the first inning, only needing to throw nine pitches.

“I think from the get-go, I knew I had my stuff,” Hansen said. “I just attacked them with (the curveball), and I kept them on their heels the whole time.”

While the first inning went nearly perfect for Hansen, he faced adversity to start the second inning. After walking the first batter, Hansen gave up a single that put runners on first and second with zero outs.

Hansen then pitched a ball that his defense would turn into a double play. With a runner on third, Hansen was able to strike out the next batter to get himself out of the jam.

“I just trust my defense, knowing that if (the batter) puts the ball in play, they’re going to make a play behind me,” Hansen said. “I didn’t feel that pressure to do too much and trusted myself.”

Hansen held the Owls scoreless throughout his time on the mound, finishing with eight strikeouts and one walk in 78 pitches.

In front of a crowd of 7,355 spectators, Pierce thought the entire team did a good job blocking out that extra adrenaline and stayed within what they are capable of. Pierce said that he often sees players trying to do too much when they get out on the field in front of fans early in the season but thought his team played within itself.

“I saw a lot of the same of what we’ve seen in the fall and early spring of how we approach the game,” Pierce said.

The Longhorns are back in action Saturday afternoon to play the Owls for the second game of the season.