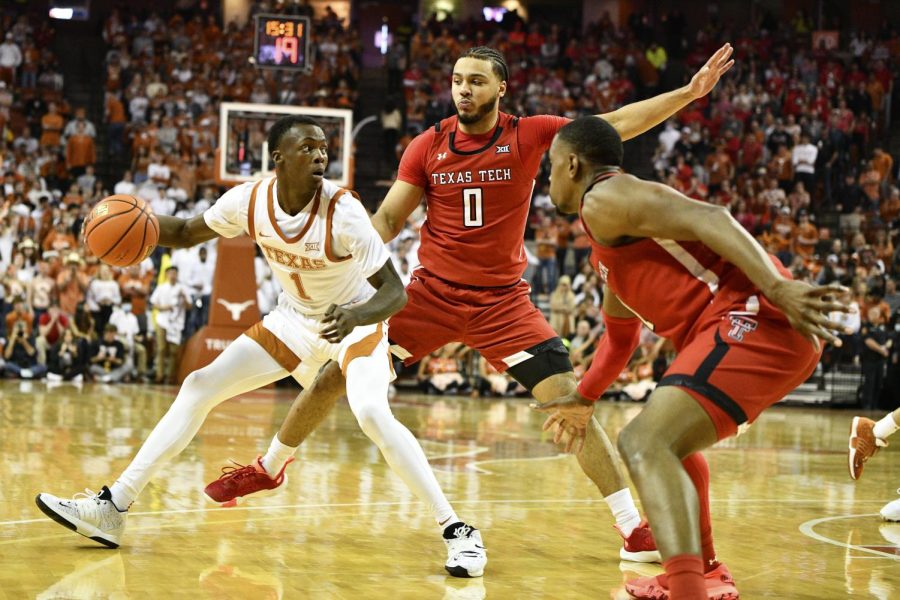 The highly anticipated rematch between No. 20 Texas and No. 11 Texas Tech did not tip in Texas’ favor.

But despite all of the efforts to protect home court, things did not go as planned.

The Longhorns dropped their second game against the Red Raiders this season in a tight 61–55 loss at home, with Andrew Jones being the only Longhorn to score in double-digits.

A rough day for Marcus Carr did not help the Longhorns either. The starter did not score a single point in his 33 minutes of play.

“There’s no doubt that I didn’t play my best today,” Carr said.

The preseason No. 1 transfer followed that statement by apologizing to his teammates and coach for his performance. Carr ended the game with zero points, four turnovers and two personal fouls.

Timmy Allen, Texas’ scoring and rebounding leader, fouled out of the game with only six points and two rebounds. Prior to today, the former All Pac-12 First Team member averaged 11.9 points and 6.5 rebounds per game.

A 3-point shot from Andrew Jones with 01:37 remaining made it a one-point game, but a foul on Brock Cunningham sent Kevin Obanor to the free-throw line. After Obanor banked both free throws, the Longhorns managed to send two more Raiders to shoot free throws, which ultimately sealed their fate.

Aside from some poor individual showings, Texas Tech was simply the better team today. The Red Raiders out-rebounded the Longhorns 45 to 36.

“They won the game with their rebounding,” Texas head coach Chris Beard said.

Texas Tech’s rebounding had huge implications in a game that was essentially decided by two possessions. The Red Raiders had 15 second-chance points to Texas’ six.

Beard’s former team played with power. Three players scored in double-digits. Texas Tech guard Clarence Nadolny had a strong statement about his team’s win over Texas after the game.

“With all of the respect I have for them, that was personal,” Nadolny said.

Nadolny scored 14 points on Saturday, which is the first time that he has scored more than 10 points since Jan. 11.

Despite dropping two games to the team that he took to a Final Four, Beard is adamant that Texas will bounce back.

“They don’t hand out the trophy in February,” Beard said. “It’s a hurt locker room for us right now. But we’ll be back.”

TCU pays a visit to Austin on Wednesday in the second-to-last men’s basketball game at the Erwin Center.