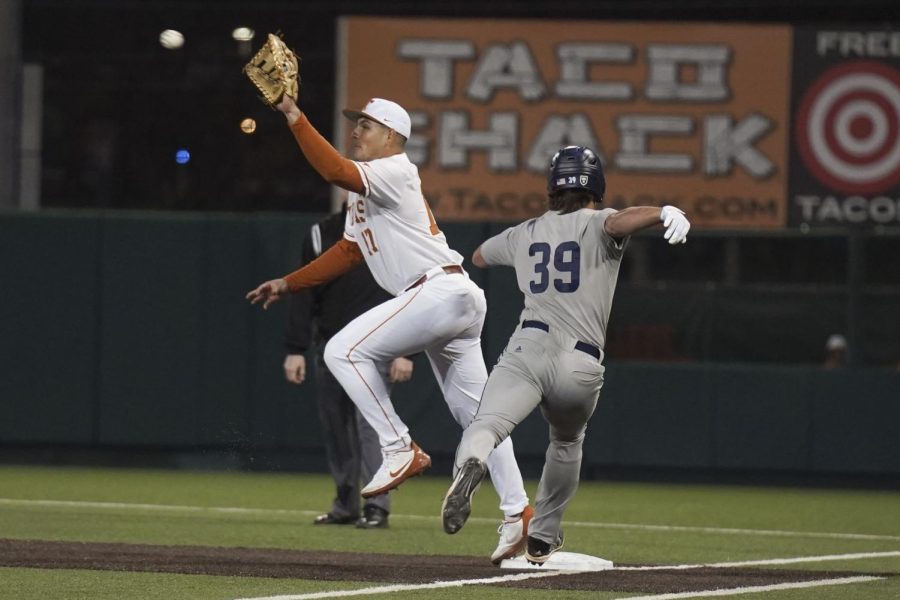 Texas baseball first basemen Ivan Melendez uses his glove to help secure the out at first base. Texas played Rice at UFCU Disch-Falk Field on Feb 18, 2022.

After outscoring the Owls 22-1 through the first two games of the series, Texas baseball ran into some minor turbulence in their opening weekend sweep of Rice at UFCU Disch-Falk Field.

In his first game starting on the mound, sophomore pitcher Tanner Witt struck out his first batter of the season in three throws to give up a homer on the next. Rice’s offense had more juice in their bats Sunday despite Witt’s solid pitching, mustering up two runs and seven hits against Texas’ defense throughout the game.

However, two Texas scores in the bottom of the first by redshirt junior outfielder Eric Kennedy and Ivan Melendez paved the way for the Longhorns to run away with the 14-2 win.

As the 7,039 attendees exploded in cheers, the stadium played Céline Dion’s “My Heart Will Go On” over the speakers, sending many of the season ticket holders into madness over the song selection.

“I blacked out for a second,” Melendez said. “I came in the dugout, and I didn’t even know what pitch he threw to me.”

Melendez did it again in the sixth inning, blasting another homer to left center field for 447 feet.

Despite being drafted by the Miami Marlins in the 16th round last off-season, Melendez came back to Texas to improve his draft stock and try his hand in the infield for the first time since his time at Odessa Junior College. Through his first three games, Melendez recorded a perfect fielding performance and put out 13 runners.

“I made (up) my mind before the draft even happened,” Melendez said. “(The Marlins) couldn’t offer much because they only saw one side.”

In the blowout, Texas took advantage of Rice’s shaky bullpen and infield. In the first inning, the Owls allowed two walks and a single before redshirt sophomore catcher Silas Ardoin approached the plate with the bases loaded. On his first swing, Ardoin popped a sacrifice fly up to right field, bringing Kennedy and Melendez home.

In the midst of the drama, the Rice defense played a game of cat and mouse with second baseman Mitchell Daly, who was caught between a rock and a hard place by the first and second basemen. The sophomore avoided being tagged twice before juking Rice’s right fielder and diving back to first base, avoiding the third out of the inning.

Throughout the game, the Owls rotated through seven pitchers. Three of those pitchers were rotated out in the fifth inning, where Rice walked five Texas players and allowed two hits, adding four to Texas’ score.

Melendez said that the pitchers did a good job throwing strikes and commanding the zone in front of a big home crowd.

“I think everybody’s doing their job,” Melendez said. “And when everybody does their job, we get a score like that.”