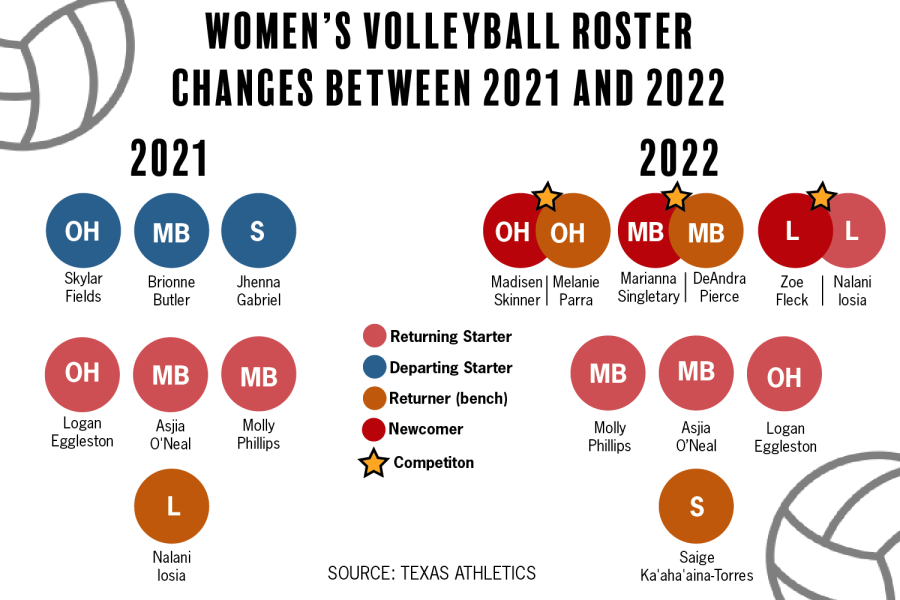 It has been a turbulent offseason for Texas volleyball.

Following the loss against Nebraska in 2021’s regional final, the Longhorns were expected to retain every starter for the 2022 season, with the exception of senior Brionne Butler, who aged out of NCAA eligibility.

With minimal roster gaps headed into spring volleyball, scrappy UCLA transfer Zoe Fleck addressing the back-row defense concerns, and four new freshmen joining the team in the fall, Texas was in contention for another No. 1 preseason accolade in 2022.

However, things changed quickly during the offseason.

After longtime associate head coach Tonya Johnson left the Forty Acres to take over LSU’s program, head coach Jerritt Elliott addressed the personnel gap by hiring Olympian outside hitter Jordan Larson. The Nebraska product, who Elliott describes as a “home run hire,” was brought onto the Forty Acres in January to begin acclimating to the program.

In two months, Texas volleyball has also lost half of its starting lineup through transfers, graduations and players leaving the team.

Junior Skylar Fields, who earned a Third-Team All-American honor for the 2021 season, announced that she would be entering the transfer portal just six days after the loss to Nebraska. Less than a month later, the opposite hitter officially signed with USC, leaving big shoes to fill as Texas’ second-leading scorer for the season behind junior Logan Eggleston.

Although replacing Fields’ punch at the net is difficult, Texas acquired an accomplished hitter in Kentucky transfer Madisen Skinner. In the Wildcats’ 2020 national championship run, the true freshman emerged as a feisty attacker that played well under pressure. She put up 19 kills and had a .455 hitting percentage against Texas in the championship game. Skinner brings tournament experience to a team that works for a trip to the Final Four this fall.

Melanie Parra is another outside hitter expected to step up. Although she primarily recorded minutes behind the service line and in the back row, the sophomore put on a show as a primary attacker when O’Neal was ruled out for the final regular-season game of the 2021 season, recording nine kills for .471 and three blocks. With more time at the net, Parra could become the leading scorer on the team as an attacker and serving specialist.

The Longhorns will also be without junior Jhenna Gabriel, who announced in January that she would retire from college volleyball to prioritize her mental health. Gabriel, another All-American, managed the offense as a setter and played a cornerstone role in assisting the middle blocking trio of Butler, Asjia O’Neal and Molly Phillips.

With Gabriel’s retirement, the Longhorns will likely use Saige Ka’aha’aina-Torres as their game manager. Unless Elliott picks up another setter from the transfer portal, Ka’aha’aina-Torres will be the only player on the roster that is eligible to take Gabriel’s spot, as Naomi Caballo transferred to NC State during free agency.

Last season, Ka’aha’aina-Torres shared minutes with Gabriel as an unconventional setter who could step up as a brick wall in the front row. In 2021, the junior recorded 21 blocks in only 58 sets played, whereas Gabriel typically set from the back row to establish a three-pass option for Texas.

While Texas enters the 2022 season with question marks, they will also hold on to team leader Logan Eggleston and head coach Jerritt Elliott, who has been with the Longhorns for over 20 years, providing some constants for the team moving forward.