Siblings attending UT together find comfort in sticking together 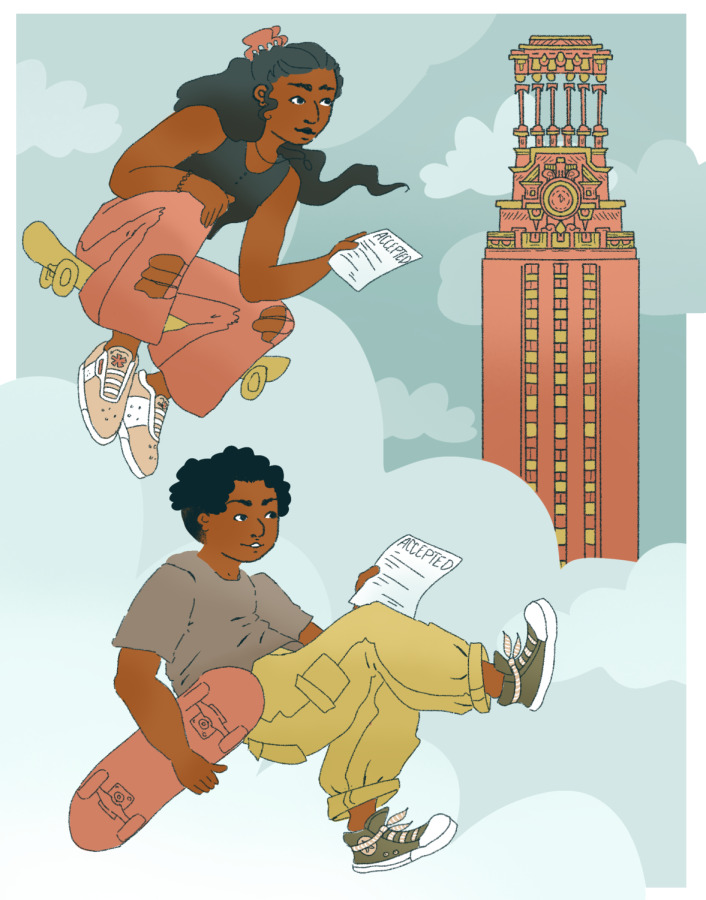 Following the familiar path from her dorm, Alexa Ornelas stopped in front of UT’s Littlefield Fountain, illuminating her body with its lights. Closing her eyes, she said the iconic spot consistently grounds her on bad nights.

Waiting there, her worries eclipsed by the tower, the radio-television-film freshman said she likes to imagine sharing the comfort with one of her favorite people — her little sister.

“(The fountain and tower are) really symbolic,” Ornelas said. “It’s like I’m here for a reason.”

Following her first semester at UT, Ornelas said she realized college can be especially isolating, a feeling she hopes to help her younger sister with when she arrives as a freshman next fall. For students like the Ornelas sisters, attending the same college offers an opportunity to have the familiarity of home while relieving the stress of campus life.

“When the days are good, they’re really good, but when the days are bad, they feel like the worst days ever,” Ornelas said. “I’m excited to take away some of the intensity of the really good days and bad days, and show (her that) sometimes you can just have days.”

After applying to UT this past fall, Mia Ornelas said she gave her UT admission portal information to her sister, trusting her as the first to know if UT accepted Mia or not. When Alexa facetimed her with the good news, Mia said she burst into tears.

“Everybody was always like, ‘When you’re at UT (this), when you’re at UT (that)’, I’m like, ‘Oh my God, y’all are giving me anxiety, what if I don’t get in?’” Mia Ornelas said. “When I found out, it was a really happy thing … Especially since Alexa is there, I have people that I know will help me out.”

While the two will be on the same campus next fall, Mia said she elected to live on her own, so she can have her own space to make memories and friendships.

“We’re still gonna be there for each other but also have our own lives,” Mia said. “I think that’s a good thing … it’ll be comforting to know that she’s there with me if I need to go over to her apartment or bother her.”

Following in her three siblings’ footsteps, human dimensions of organizations sophomore Sofia Wise said applying to UT was a no-brainer. Wise’s sisters’ love for campus post-graduation inspired her and her brother — also a current student —  to attend. Together, they shared tips and advice on finding classes and making friends.

“I started bawling when I found out I was accepted because it’s been my dream to go to UT,” Wise said. “My sisters (and brother) also went to UT, so it’s all four of us … It’s so fun.”

When their schedules allow it, Wise and her older brother make the 20-minute drive to campus from their family home. Wise said the convenience and constant company is a pleasant addition to college life that makes her feel closer to her siblings.

“It’s nice,” Wise said. “(I like) spending more time with him and hanging out with him more. Now that we’re in college, our age difference isn’t really that big of a deal (like when) we were younger … We hang out a lot.”