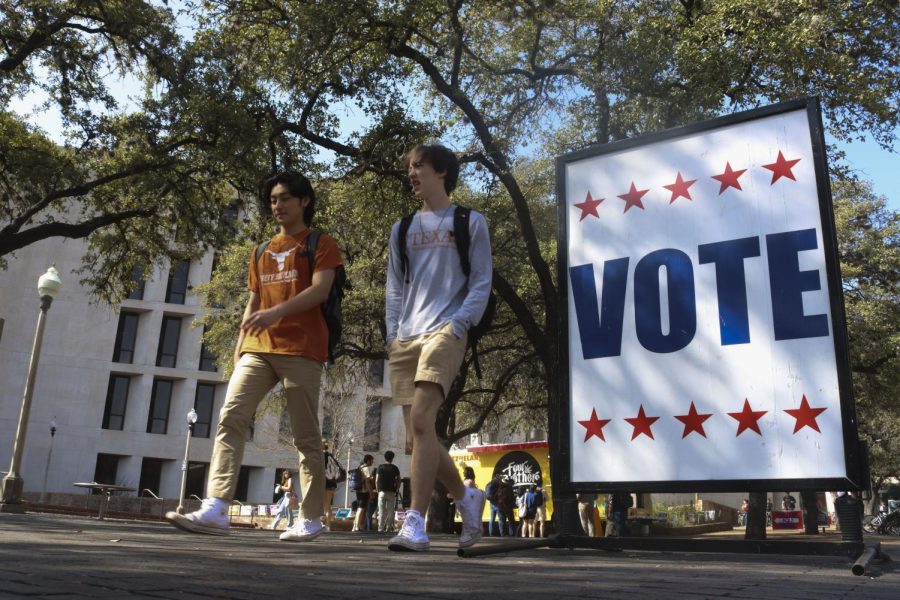 UT students take advantage of on-campus early voting as the early voting period comes to a close for the March 1 primaries.

The early voting period for the primary elections began Feb. 14 and ends Feb. 25, with election day on March 1. The primaries will determine candidates for a number of Texas races, including the governor, lieutenant governor, attorney general, state senator and state representative offices. Joseph Kudler, co-director of Hook the Vote, a student government agency advocating for civil participation, said students should register in Austin to avoid having to vote by mail back home.

Students and Austin residents can vote early now and on election day from 7 a.m. to 7 p.m. at the Flawn Academic Center and Perry-Castañeda Library on campus. Over 1,000 people voted at the University’s two early voting locations in the first eight days of early voting, according to the Travis County Clerk’s Office.

Government sophomore Kudler said voting early is the best way to make sure voters do not have to face time constraints on election day.

“We encourage students to early vote,” Kudler said. “(Students) wait till election day, and then you’ve got the long lines and students, of course — they have (student) org commitments, they have classes.”

Since January, counties across the state have seen record-breaking numbers of mail-in ballot requests rejected due to confusion over new voter identification requirements.

“A lot of election information is, I would argue, designed to confuse people and designed to be very exclusive,” said Kerry O’Malley Gleim, co-director of Hook the Vote and a communication and leadership junior. “It makes the process more anxiety-provoking.”

Kudler said voting by mail can be more difficult than finding a convenient polling location, and the added wait time to receive a ballot in the mail often pushes voters close to missing the deadline.

“Even before (Senate Bill 1), it was generally a nightmare,” Kudler said. “Not only logistically, but it’s purposely slowed down. So it deters people from voting by mail.”