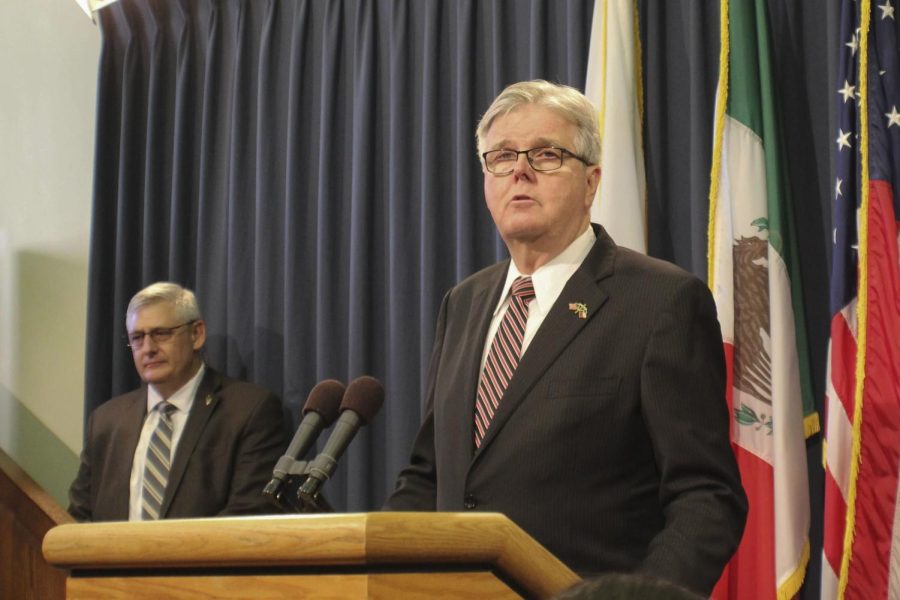 Lt. Gov. Dan Patrick gives a speech at the Texan Capital on Feb 18, 2022. He addressed critical race theory and pledged to eliminate tenure for new hires at Texas public universities.

Critical race theory is an approach to studying how racial bias has shaped American law and society. In recent months, the theory has come under attack from primarily conservative individuals who want to remove it from public school curriculums.

The Faculty Council approved the initiative Feb. 14, following the lead of other major universities, said Andrea Gore, who submitted the resolution.

“We have the academic freedom to teach in areas that not everybody agrees in,” said Gore, a professor of pharmacology and toxicology. “It’s just absolutely fundamental to education and for students to be able to learn from diverse viewpoints.”

UT President Jay Hartzell said removing tenure would make it difficult for the University to recruit and retain faculty and could affect students’ quality of education in a statement Monday.

According to the Office of the Executive Vice President and Provost, more than half of UT’s 3,814 faculty members are tenured or on the tenure track as of Thursday.

“This is entirely one sided,” Lowery said. “You’re promoting the idea that academic freedom is the collective right of the facts that decide which ideas are allowed on campus, not the individual right of faculty to express their own ideas. That is not what academic freedom means.”

Elizabeth Gershoff, professor of human development and family sciences, responded to Lowery during the meeting, saying professors will not be required to incorporate critical race theory into their curriculum, but the resolution gives them permission to talk about it.

Mathematics senior Jordan Grant said Patrick’s declaration could threaten the quality of education at Texas public universities because Texas universities could lose professors to universities that do offer tenure.

“The problem with this whole idea of getting rid of tenure is that he’s basically threatening a group of people unless they behave in a specific way,” Grant said. “(It is) essentially taking away the safeguards that academia has to be able to discuss ideas which are controversial or not accepted by the mainstream.”

Patrick said in a press conference Friday that a group of UT professors should not be able to speak for the majority of educators.

“We are not going to allow a handful of professors who do not represent an entire group to teach and indoctrinate students with critical race theory that we are inherently racist,” Patrick said during the meeting.

Mary Beth Schmitt, an associate professor in the department of speech, language and hearing sciences, is nominated for tenure for her research on helping children with language disorders. Schmitt said tenure gives students protection as they are being taught by trained experts in their field.

“(Tenure) is quite a rigorous process where faculty are assessed across teaching, their scholarship and service,” Schmitt said. “To go somewhere that doesn’t have that rigorous process in place and  doesn’t have accountability structures built in, I would not personally interview or go to a place like that.”

Karen Willcox, tenured professor of aerospace engineering and engineering mechanics, said most university professors could find much more fame and fortune working in the private sector of their field.

Tenured professor Elizabeth McCracken, who holds the James A. Michener Chair in Creative Writing, said in a tweet she wishes to be the first professor at UT to be fired for teaching topics the lieutenant governor does not like.

“I think that not only when it comes to those of us who are on the tenure track, or tenured … if one of us is unsafe, then none of us are safe,” McCracken said.