No. 1 Texas brings Alabama’s perfect season to an end in a windy 1-0 win 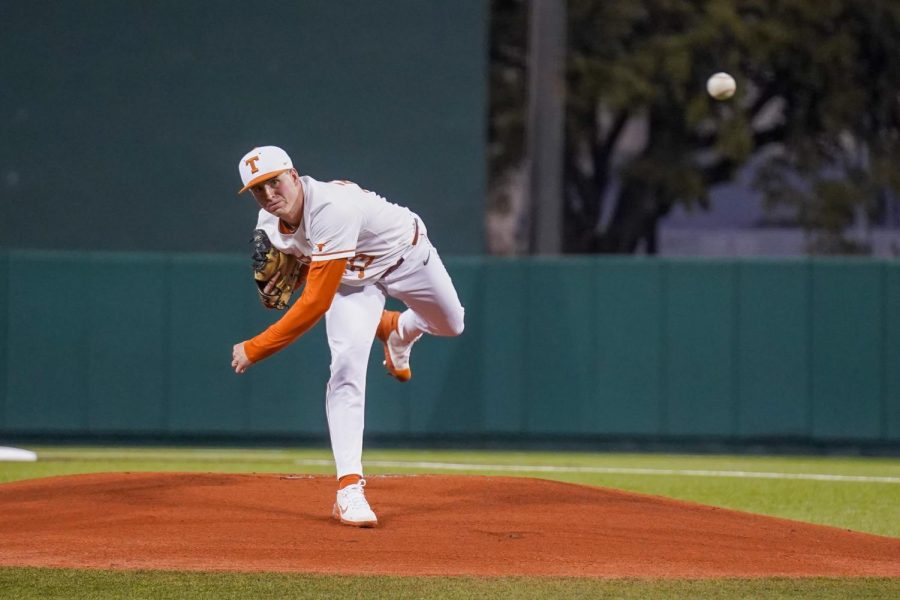 For the first time in nearly 40 years, Texas baseball squared up against Alabama. The last time the two teams met was during the 1983 College World Series.

On June 11, 1983, head coach Cliff Gustafson and his team topped the Crimson Tide 4-3 off tremendous pitching by Calvin Schiraldi and Roger Clemens to secure the national title.

Just like in 1922, the first time the two teams played in Austin, No. 1 Texas’ tough command of the mound on Friday helped secure the win against the previously undefeated Alabama. The Longhorns now sit at 6-0.

Redshirt sophomore Pete Hansen proved in his second start of the season that he is a lights-out pitcher. Primarily using his fastball, the lefty commanded the zone by throwing eight strikeouts in his five innings played.

“Pete (was) in attack mode the entire night,” head coach David Pierce said. “(He) pitched really well (to) both sides of the plate with his fastball, (but) utilized his changeup and slider when he needed it.”

Texas’ stellar box score pitching statistics of seven hits for no runs was not the whole story.

Friday’s game was played in unfavorable conditions. The wind consistently blew at 10 miles per hour for a feels-like temperature of about 32 degrees, causing both teams difficulty rocketing balls for base hits.

Texas first baseman Ivan Melendez blasted a pitch at 112 miles in the sixth inning that might have floated over the fence in a game with more favorable conditions. However, his ball dropped down to left field where Alabama put him out.

Similarly, the Crimson Tide hit a couple of rockets throughout the game that the 6,361 blanket-bundled Texas fans believed would fly out to the parking lot. Cries of frustration transitioned to victorious cheering of “Texas Fight” as the Longhorn outfield trio of Eric Kennedy, Doug Hodo III and Austin Todd clutched flies for easy outs.

In combination, the teams had 19 flyouts, 13 groundouts and no earned runs in the game.

“It really felt like we’d probably hit four home runs on a neutral night,” Pierce said. “(Alabama) probably had one (too) but it was just a tough night to hit.”

However, Texas finally caught a lucky break in the seventh inning.

Kansas transfer Skyler Messinger hit a single down center field for the Longhorn’s first time on base since the fifth inning. Rattled, Alabama pitcher Dylan Ray hit shortstop Trey Faltine for a
walk to first base.

The two baserunners advanced another two plates on a passed ball and a wild pitch, bringing Messinger home for the sole score of the game.

In the top of the eighth, Alabama capitalized on redshirt sophomore Jared Southard’s struggle pitching in the wind, adding two base runners on a walk and a hit. After giving up the hit and pitching nine balls, closer Aaron Nixon replaced Southard.

In his final strikeout of the inning, Nixon threw a meticulous slider, stranding three Crimson Tide runners on base.

Although the defense heavy game was frustrating for the aggressive Longhorn sluggers, the perseverance brings the team a lot of pride.

“(There were) tough conditions for our hitters, and they grinded through it,” Nixon said. “It was a team thing and we’re just really happy to be here and looking down at the next few games.”