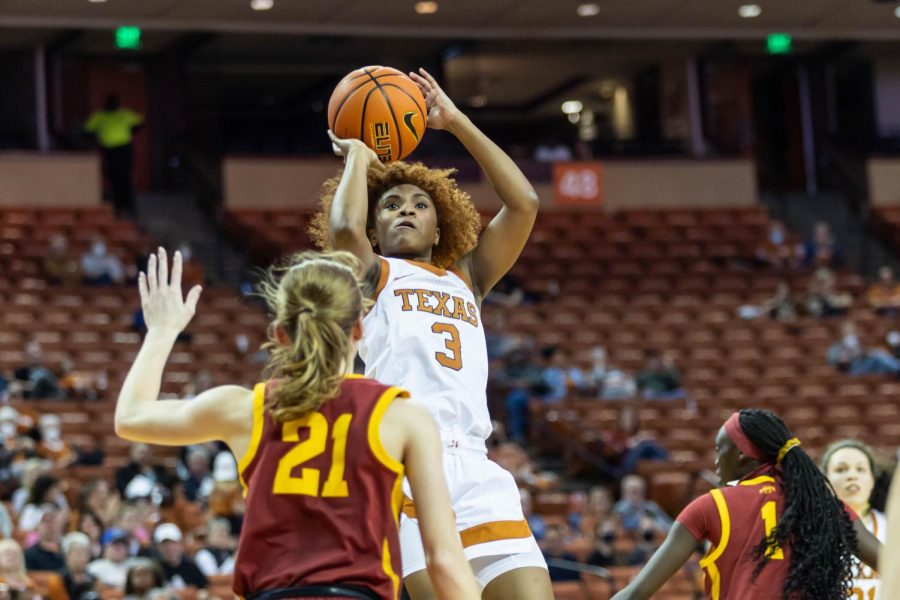 The Texas women’s basketball team has brought some of its best basketball to the court in the final stretch of its 2021-22 season. Extending their win streak to six games, the No. 11 Longhorns defended home court and defeated TCU 77-42 Saturday.

Texas swept the season series against TCU and extended their all-time series lead to 10-1 in their last 11 meetings. The Longhorns improved to 21-6 and 11-5 in conference, tied for second place. TCU widens their losing streak to 11 games straight and are currently last in the Big 12.

Sophomore DeYona Gaston was a force to be reckoned with on the floor. She led the Longhorns in scoring with 16 points on 8-8 shooting, breaking her season average of 7.5 points per game in the first quarter.

“She’s just a freshman in my mind,” Texas head coach Vic Schaefer said about Gaston. “She didn’t play a lot as a freshman and when the kid gets healthy there’s no telling what she can do, and I think you saw a glimpse of that tonight.”

Gaston’s night was cut short, however, due to a fall that required her to be taken out of the game. Moments later, her teammate, senior Audrey Warren also had to be tended to and taken into the locker room.

Both players have been officially examined, according to Schaefer.

Texas continued to display its disruptive defense on Saturday night,  accumulating 13 steals and forcing 26 turnovers. The plays led to 38 points scored on the Horned Frogs.

“We make a lot of things happen,” Schaefer said. “There’s nothing comfortable about playing against this team right now, which I like.”

Junior Aliyah Matharu recorded six steals and at one point of the game was thrown into a chokehold by TCU senior Okako Adika while chasing after a loose ball. Additionally, the junior guard racked up nine points and five rebounds.

On the offensive end of the court, the Longhorns distributed the ball to near perfection, totaling 18 assists on the night. Freshman Rori Harmon facilitated the offense with 11 assists, marking her second game this season with 10 or more assists.

“Rori had a heck of a game, y’all,” Schaefer said. “That’s a point guard that just ran her team and got the most important stat, which is the W.”

Shots were falling for nearly every Longhorn that got on the court. The team as a whole shot 50% from the field. Senior Joanne Allen-Taylor had her 17th game this season in double digit scoring with 12 points on 50% shooting.

Despite recent criticism from Schaefer about fan engagement with his team earlier this week, he said that he was proud of the crowd tonight.

“I thought that second quarter when we made our run,” Schaefer said. “I thought the roof was gonna blow off the place.”

Stakes are high for the Longhorns as they finish out February. With just two games left in their season, up next is a trip to Kansas to take on the Jayhawks March 2. Texas closes the regular season at home on March 5 against Oklahoma State.