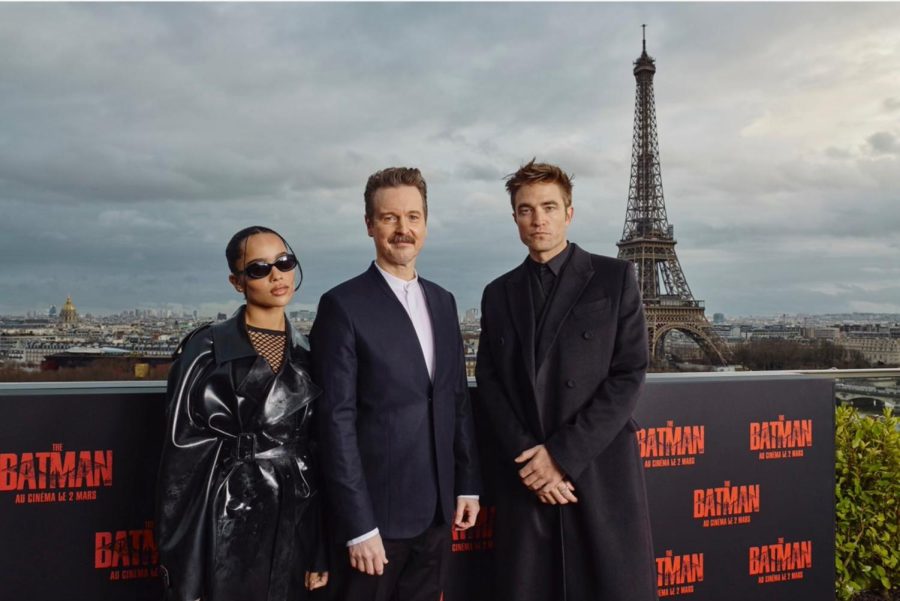 Robert Pattinson, Zoë Kravitz and Matt Reeves pose in Paris at a special event for “The Batman.”

“The Batman” glides into theaters this week, and fans all over the world eagerly await the return of the caped crusader. Robert Pattinson stars in the film, directed by Matt Reeves, as the unmistakable Bruce Wayne. Thrown into the middle of a harrowing crime spree led by none other than The Riddler (Paul Dano), Batman struggles to protect the city of Gotham alongside other classic Batman characters, such as Catwoman (Zoë Kravitz).

The Daily Texan attended a virtual press conference about the film featuring the leading cast and director.

After several COVID-related shut-downs, delays and obstacles, the team behind “The Batman” endured a long journey to bring this film to life. Robert Pattinson detailed his reaction to seeing a cut of “The Batman.”

“It’s the first time I’ve seen a movie (with) two different iterations (of it) before the final one,” Pattinson said. “Just to see this wave of craftsmanship getting more and more impressive every single time (I watched), I was so unbelievably impressed.”

“(I loved) how immersive it was from the opening shot till the end. I love when you watch a movie, and a filmmaker takes you in (from) frame one and (pulls) you through right till the end, and as an audience member, you have no choice but to give over to the movie,” Dano said. “It’s just the best feeling to me as an audience member. … I can’t wait to see fans react to this movie.”

On-screen Batman adaptations have been around since as early as the original television series, which aired in the 1960s and starred Adam West. With the hefty task of breathing new life into familiar lorel, Reeves described how he approached his creative process for the film.

“The creative process, for me, is being in a dark room on your hands and knees, reaching for something that feels familiar,” Reeves said. “I knew that I wanted to take this iteration of a younger Batman that was early in his arc (with) room for growth, and put him at the center of this mystery that would pull us into the path of all of these characters.”

Throughout the film, Reeves often positions the camera to align with the perspectives of the film’s characters. By doing this, the world of “The Batman” feels as immersive as ever. Reeves explained how sound design and Michael Giacchino’s musical score amplified this effect.

“That Batmobile chase, you feel like you’re just in it. That was the intention, to make sure that you felt the visceral quality of the film,” Reeves said. “If Batman is knocked out, you’re going out with him in a classic noir way, and the sound helps to make that transition. The music by Michael is incredibly emotional. There’s this kind of obsessive drive of Batman that is (in) his (musical) theme.”

The complex and layered relationship between Catwoman and Batman at the heart of the film is one of the most compelling elements of “The Batman.” Playing the notoriously on and off couple from the Batman comics, Kravitz talked about how she and Rob achieved their on-screen chemistry.

“The emotional states of both of these characters, the connection they find in each other and why they connect was so clear,” Kravitz said. “These people felt alone their entire lives, and to meet somebody who has a similar way of thinking, … it is the heart of the story, and it’s a big deal for both of these characters to feel this way.”