No. 23 Longhorn softball leaves UTSA, Tulsa in the dust in Round 2 of Texas Classic 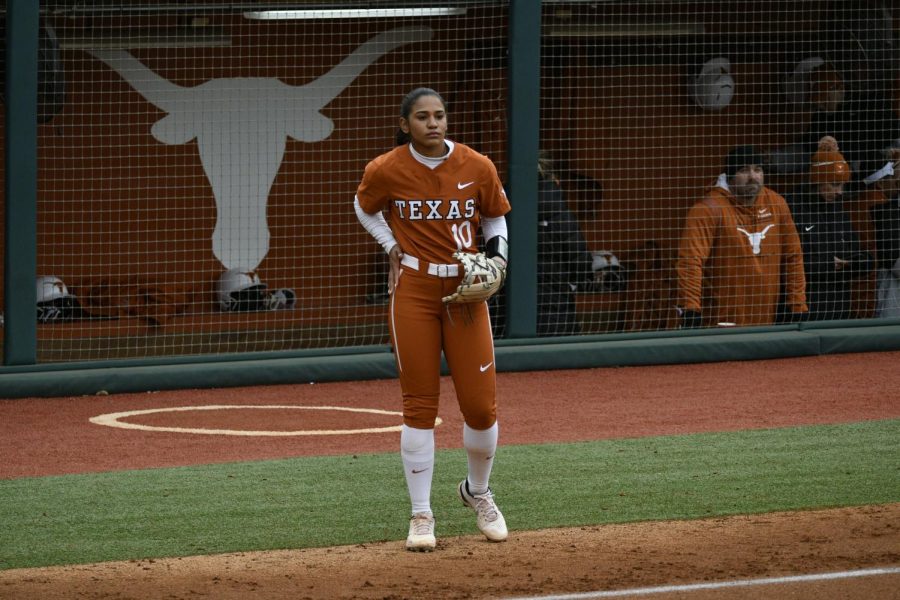 After a tough six-game losing streak, No. 23 Texas softball sought a crucial win against the University of Texas at San Antonio and Tulsa University this Sunday during their second round of the Texas Classic.

With the sun setting behind the Red and Charline McCombs Field, Texas took to the mound to kickoff its first game of the evening against the Roadrunners. However, the team was missing two key starters, with junior infielder McKenzie Parker suffering an aggravated shoulder and senior first baseman Mary Iakopo benched for team discipline.

Both Parker and Iakopo have been prominent leaders for the team in terms of hitting, Parker with a hitting average of .353 and Iakopo at .343 for the season so far. But their absence only seemed to motivate the Longhorns, as reflected in their rapid 4-0 lead in the first inning.

“It was hard, but you have to play for them,” freshman pitcher Sophia Simpson said. “You gotta pick it up for the team, and it looks like we did.”

Freshman infielder Mia Scott and Simpson stepped up to the plate once again, continuing the energy they’ve been building since their game against McNeese State. Simpson’s pitching speed and precision executed 12 strikeouts against UTSA. Combined with Scott securing multiple throw outs and a hitting average of .478 for the night, the Longhorns put their opponents to the test.

“You could feel the energy in the dugout. Everybody’s just cheering you on and everybody could hear it,” Simpson said. “I love the energy, whether it’s negative or positive, it hypes me up and makes me show more emotion.”

In addition to their defense performance, the Longhorns upgraded their hitting from Friday’s game, executing nine hits to sweep the Roadrunners 8-0. Senior utility Lauren Burke stood out with her first home run of the season during the third inning and gathered two points with two hits to send Texas cruising past UTSA.

But the victory run didn’t stop there. Texas went on to face Tulsa to finish out the night, shutting the opposing team down with a score of 14-1. Sophomore pitcher Estelle Czech stepped into the spotlight for this game, serving up four strikeouts over the four innings she pitched. The University of North Carolina transfer has accumulated an impressive ERA of 1.54 for the season.

Texas got the head start in the first inning by passing the Hurricanes 3-1. The rhythm between offense and defense ensured the bases stayed loaded for the Longhorns, while the chemistry of the team as a whole kept spirits light despite the colder temperatures. The third inning was like clockwork for Texas, advancing the score by eight runs, with contributions across the board.

The team will be back in action Monday to end the Texas Classic series with a rematch against Tulsa and its first game against Texas State.