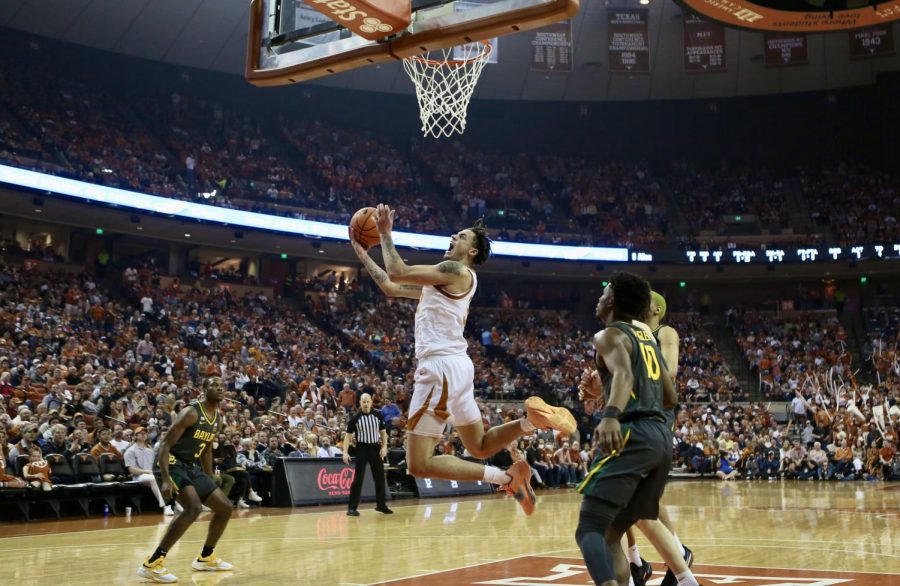 Forward Christian Bishop goes up for a shot against Baylor. Texas Men's Basketball played their final game in the Frank Erwin Center on Feb. 28, 2022.

After the game in Waco, senior guard Courtney Ramey criticized his teammates and himself for their performances.

“All 13 players can say that we played soft today,’ Ramey said.

But the first half of Monday night’s rematch of Texas and Baylor looked promising for the Longhorns compared to the whole game in Waco: Texas led 30-27 at the half.

At the half, Baylor had eight turnovers compared to Texas’ five. The Longhorns were also able to create 13 points off of the Bears’ turnovers, while the Bears netted just two off of the Horns.

Sophomore guard Devin Askew matched his Texas career-high of six points with some crucial plays in the start of the game. With 3:30 left in the first half, the Kentucky transfer made a two-point hook shot in the paint to extend Texas’ lead to 24-20. Askew followed his offensive move with a steal from Baylor’s Dale Bonner that ended in Askew hustling down the court to make a wide-open layup, putting Texas up 26-20.

However, Baylor was able to take the lead and run away with it in the final men’s basketball game at the Frank Erwin Center. The reigning national champions made offensive improvements that the Longhorns were not able to answer to in a 68-61 loss for Texas.

Baylor’s 3-pointers landed more frequently in the second half, with the team shooting 60% from the 3-point line versus 25% in the first half.

While the Bears’ shooting improved, the Longhorns’ were relatively stagnant. Texas shot 2-11 from the 3-point line in the first half and 2-12 in the second half.

“Great teams make adjustments at halftime and that’s what we did,” Baylor guard Adam Flagler said.

Texas head coach Chris Beard was well aware of Monday night’s scoring issue and made it clear  that failing to make shots will not win games.

“We fought; we scrapped,” Beard said. “But basketball’s a game of making shots. It really is.”

Meanwhile, Texas’ two leading scorers, Marcus Carr and Christian Bishop, had 13 points each. Bishop did not make any 3-point attempts, and Carr was 3-of-8 from deep.

Texas’ final regular-season game comes on Saturday, when the Longhorns visit No. 6 Kansas in Lawrence.

Following the conclusion of the regular season, Texas still has to prepare for the Big 12 Tournament in Kansas City and the NCAA Tournament.

“We’ve just got to turn the corner in March,” Beard said.