No. 21 Texas men’s basketball falls short in overtime thriller against No. 6 Kansas, 70-63 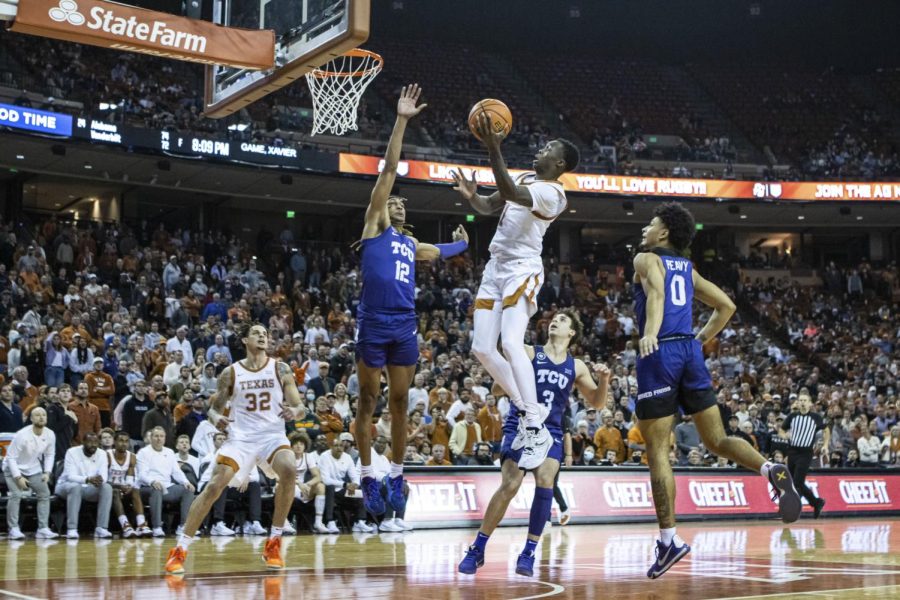 Andrew Jones glides through the air for a dunk.

In its final regular season game before an imminent NCAA Tournament bid, No. 21 Texas fell just short of a monumental upset of No. 6 Kansas at Allen Fieldhouse. Despite pushing the Jayhawks into overtime on the road, the Longhorns fell short in the final minute of play, 70-63.

Despite the wealth of offensive talent on both sides, the game was tied at 57 points heading into overtime thanks to stifling defensive adjustments by Texas head coach Chris Beard and veteran Kansas head coach Bill Self. The game was one of the grittiest defensive battles of the season for both teams.

Neither team managed to gain a foothold in the first half. The Longhorns posted an impressive  62.5% shooting from three-point range while holding Kansas to just 31.3% from the field. A slew of fouls gave the Jayhawks a slim two-point lead going into the half.

Both teams upped the ante in the second half. Texas was held to 8-of-25 shooting while Kansas made just six shots on 23 attempts. With 15 seconds left, Beard and Self traded timeouts as they locked each other into a high-stakes battle of game planning.

Texas put up a stalwart scheme and forced Self to call his final timeout with 2.2 seconds left. A last-second, circus shot attempt that went in from the Jayhawks was ruled invalid and the game proceeded into overtime.

Once again, Texas senior guard Courtney Ramey made his case for a spot on the 2022 Big 12 All-Defensive Team through his stout defense of senior guard Ochai Agbaji. The Kansas guard is the Jayhawks’ leading scorer and is widely touted as one of the best guards in the country, averaging 20.2 points per game and 42.2% shooting from behind the arc.

The last time Texas and Kansas faced each other on Feb. 7, Beard was adamant that Ramey’s defense against Agbaji was the most impressive feat on the court. In that 79-76 nail-biter of a victory for Texas, Ramey held him to just 11 points. On Saturday, Ramey stifled Agbaji again, allowing the premier scorer just two points in regulation.

Ramey’s efforts were complemented by an effective defensive scheme and key individual plays from sophomore guard Devin Askew and senior guard Andrew Jones. Beard has long been keen on the defensive acumen of Askew, but the guard’s standout performance earned him a full five-minute slate of overtime play on Saturday.

However, Kansas matched Texas with an equally steadfast defense. Kansas posted nine blocks and eight steals throughout the game, forcing 15 turnovers in the process. Sophomore guard Dajuan Harris Jr. recorded four blocks and a steal, while sophomore forward Jalen Wilson notched two blocks and steals of his own.

Ramey led Texas’ offense as well with a team-high 18 points on 3-of-5 shooting from deep. Jones backed him up with 12 points of his own, including a five-point burst at the end of regulation that brought the Longhorns back into the game.

None of Texas’ star players could match the performance of Kansas senior guard David McCormack, who recorded a game-high 22 points on 6-of-13 shooting and a perfect 10-of-10 from the free-throw line. But it was Agbaji who blew the doors off in overtime, scoring six points in three minutes. His final pair of free throws pushed Kansas to a seven-point lead with nine seconds remaining, hammering the final nail into Texas’ coffin.

The loss doesn’t impact Texas’ NCAA Tournament much, if at all. The Longhorns were expected to hold to the No. 4 or No. 5 seed range regardless of the outcome of Saturday’s game. Kansas will likely retain its No. 1 seed projection and has all but guaranteed a regular-season title in the Big 12 Conference.