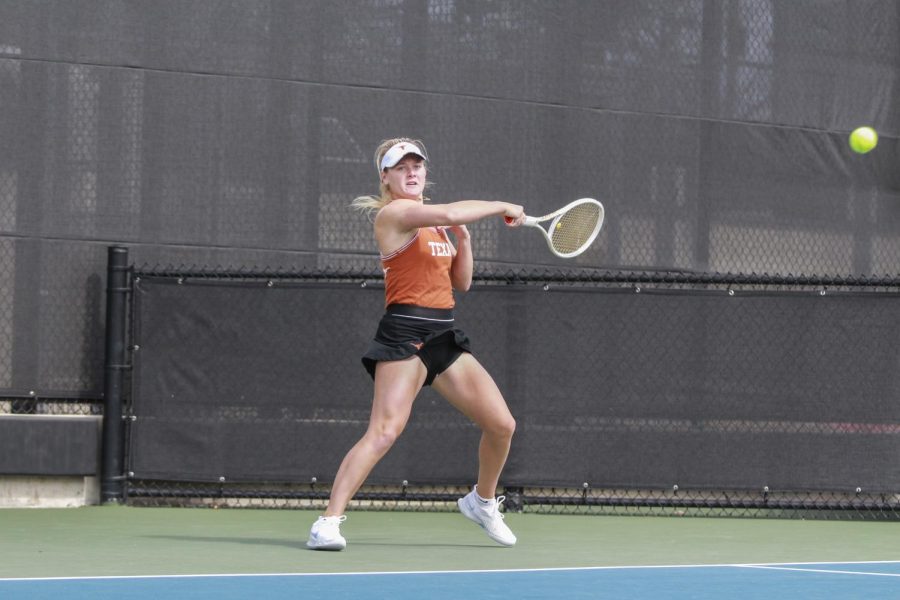 No. 5 Texas took down No. 32 University of Central Florida with a resounding 4-0 shutout that left the Knights without a win. It was evident that the Longhorns meant business Sunday afternoon, shown by strong executions across the board.

The Texas women’s tennis team returned from the Bay Area last weekend with their heads held high after a crucial win against University of California, Berkeley, looking to uphold their No. 5 ranking as the Longhorns competed at the USTA National Campus in Lake Nona, Florida. Sunday’s match against No. 32 UCF marks Texas’ seventh consecutive match against a nationally ranked opponent, emerging victorious in four of them.

The Longhorns wasted no time in delivering the Knights their first loss of the morning as doubles matches commenced. Sophomore Peyton Stearns, along with her freshman partner, Allura Zamarripa, found success early in a quick 6-2 win over UCF’s Sophia Biolay and Nandini Sharma. Not long after, the Texas tandem of sophomore Charlotte Chavatipon and freshman Vivian Ovrootsky served up a 6-3 win against Jaleesa Leslie and Noel Saidenova, bringing the Longhorns to a 1-0 lead against the Knights. This ended the remaining match of sophomore Kylie Collins and freshman Sabina Zeynalova, who battled against Evgeniya Levashova and Marie Mattel.

The curtains opened for singles play with Chavatipon taking on Leslie on court four, claiming a 6-3, 0-0 (retired) win to earn Texas its second point of the day. A consistent leader of  the team, Chavatipon dominates the court in both singles and doubles, posting a 14–4 overall doubles record which includes a 7–2 streak in dual match play. Chavatipon seeks to improve her stats from last season, where she went 25–1 in dual match action for singles and earned herself a spot on the NCAA Tennis All-Tournament team.

On court three, Zeynalova was next off the court in handing Mattel a 6-1, 6-3 loss. This Texas freshman continues to impress, as she now claims an outstanding 9–0 record in singles play this season, with notable performances against NC State and Berkeley in recent weeks.

The curtains closed on Texas’ Sunday sweep with a 4-0 win against UCF, causing the remaining matches of Stearns, Ovrootsky and sophomore Malaika Rapolu to end prematurely.

Picked as a preseason favorite, the Longhorns will seek to uphold this accolade in Austin on Friday as they face Texas Tech to open Big 12 Conference play.