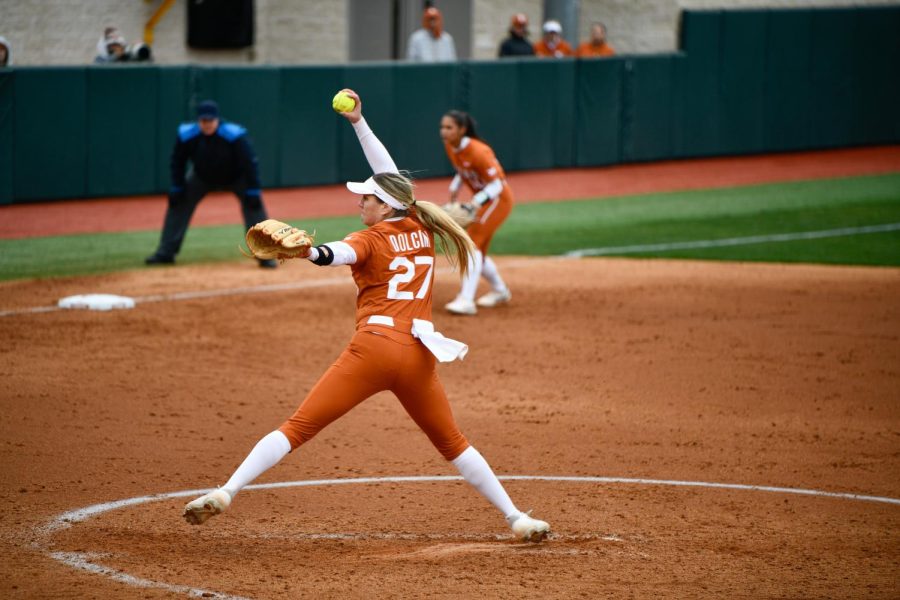 As Texas softball settles into their 2022 season, the team has picked back up on building the team’s chemistry from the fall.

While the Longhorns have seen an abundance of familiar faces return to the field, a handful of transfers have also made their debut on Red & Charline McCombs Field this spring.

The four new players hitting the roster this season have shown their dedication to the game with defensive strategies to keep the Longhorns afloat when needed and hitting accuracy to put the team on the scoreboard.

Arriving just in time for the spring season at Texas, senior Hailey Dolcini began her school year at Fresno State University. Her team finished out the fall with a 20–4 record. The All-American pitcher accumulated an average ERA of 1.12, ranking No. 11 in the NCAA, and dished out 259 strikeouts. Dolcini was named the Mountain West Conference Pitcher of the Year after leading the conference with the top ERA, opposing batting average and batters struck out.

However, Dolcini struggled to warm up to her new environment as a Longhorn, averaging a 4.20 ERA in February. In a recent game against Sam Houston, Dolcini showed progress with 14 strikeouts.

“Hailey Dolcini has been pretty good. It’s been a rough start for her,” head coach Mike White commented after the game against Sam Houston. “We’re getting some good pitching from Hailey. She’s kept herself together.”

Junior outfielder Lou Gilbert joined Texas from Baylor University, where she started all 50 games for them in the fall season with a hitting average of .327 and 15 multi-hit games. The left fielder also earned her spot in a variety of college pool teams, such as the NFCA All-Central Region Third Team, All-Big 12 Second Team and the Academic All-Big 12 First Team.

At Texas, Gilbert has eased into the spring season with four hits, including her first triple versus Miami Ohio this past Saturday.

Transferring from the University of Arizona, sophomore Bella Dayton has been a crucial asset for Texas. Dayton holds a 2–2 record for runs scored out of eight total hits, including a home run. Dayton left the Wildcats after starting in 22 games, and is now a consistent starter at Texas. She showed strength at Texas with a .333 hitting average in a matchup against Florida State and acquainted herself with the left field with 15 put-outs across 20 games.

Sophomore pitcher Estelle Czech also became a Longhorn after a successful freshman season at North Carolina State. Czech totaled up a 3.14 ERA across 22 starting appearances and posted four complete game victories. Joining Texas this past fall, Czech has added to the team with her careful control of the ball, managing an ERA average of 1.62. She’s also racked up 24 strikeouts, with five in a matchup against Notre Dame. Czech looks to be a top candidate to help the Longhorns have a strong defensive line and it has begun to show as she steps on the mound.