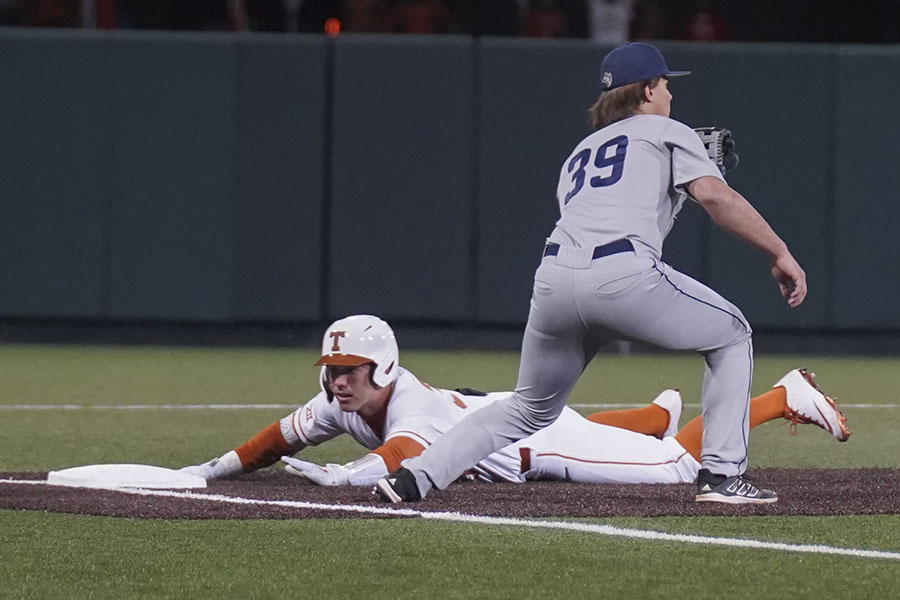 Down 6-4 in the bottom of the ninth against Texas State Wednesday night, No. 1 Texas baseball found itself with runners on first and second with redshirt junior Ivan Melendez up to bat.

With assistant coach Sean Allen standing in as head coach for an ejected David Pierce, Texas State closer Tristan Stivors struck out Melendez looking on a full count, giving the Bobcats the victory and splitting the midweek series.

The loss is the Longhorns’ first at UFCU Disch-Falk Field this season and puts them at a 12–2 record.

“It’s college baseball, you’re not going to go out there and play perfectly every day,” assistant coach Sean Allen said. “There are things on both sides of the ball that we can get better at.”

Following a thrilling 9-8 Texas victory over Texas State in San Marcos Tuesday night, 7,469 fans gathered into UFCU Disch-Falk Field for Wednesday night’s rematch. With the two schools being only a short drive from each other, Texas State was well represented in the crowd.

Allen said that environments like the crowds on Tuesday in San Marcos and in Austin on Wednesday will help the team down the stretch.

“For us to win and do the things we want to do this year, we’re going to have to go into hostile environments and handle those situations,” Allen said.

The Longhorns were able to get the best of Bobcats pitching early. A two-run home run from redshirt junior Eric Kennedy in the first inning and two Texas doubles forced Texas State starting pitcher Peyton Zabel out of the game after only recording one out.

Similar to the first game of the midweek series, the Texas State hitting exploded in the third inning. Texas State outfielder John Wuthrich blasted a three run home run to tie the game. The Bobcats would end the inning with a 5-3 lead.

Texas State added another run in the fourth inning off of a solo home run. The four home runs given up by Texas pitching in two games against Texas State are more than the pitching staff had allowed all season so far.

Allen said that while the Texas pitching staff struggled early, there were some positives in the pitching down the stretch. Texas held Texas State scoreless in the final five innings, only allowing one hit.

“A lot of guys ran out there that don’t have a ton of innings of college baseball,” Allen said. “We will get better from them just stepping on the mound. We will learn and continue to work every single day.”

Texas looks to bounce back when it heads to Columbia this weekend to play South Carolina. After the weekend series, Texas will stay in the state of South Carolina to play the College of Charleston on Tuesday and The Citadel on Wednesday.