As Texas women’s basketball heads into final home game, here’s a look back on the Longhorn seniors 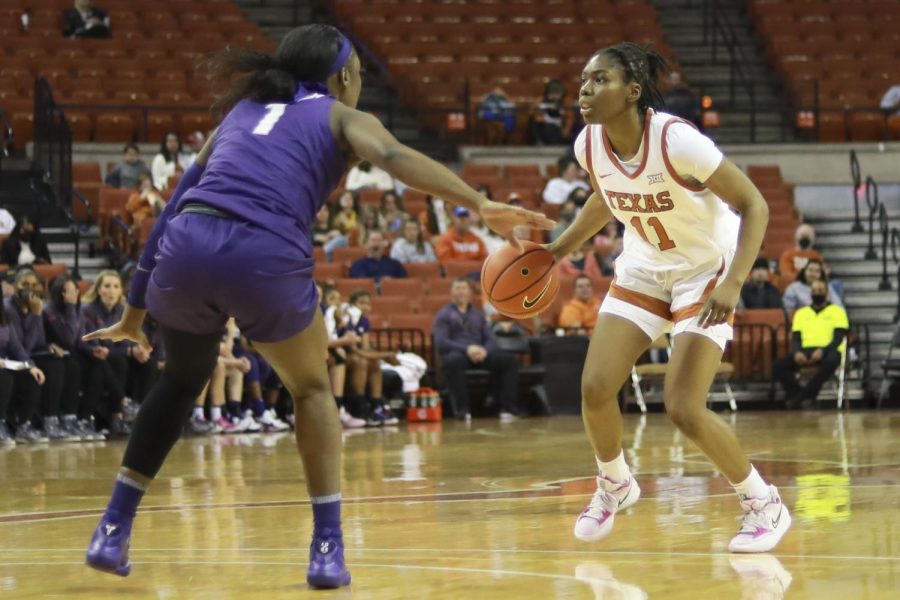 Guard Joanne Allen-Taylor looks for a teammate to pass the ball to. Texas beat TCU at the Frank Erwin Center on February 26, 2022.

Editor’s note: This story originally appeared in the March 4, 2022 flipbook.

Coming into the season, there were many questions around whether a young Texas women’s basketball squad was ready to make an impact in the Big 12 this season.

Although Texas holds one of the younger teams in the nation, the team relied on veteran leadership from three seniors to lead the team to a top 10 ranking and a 22-6 record.

Their play on the court during their time with Texas has set a standard on what women’s basketball should look like for years to come. Here’s a look back at what these seniors have done over the course of this season with the Longhorns:
Audrey Warren
Warren averaged around nine points, four rebounds and two assists per game. She may not be the flashiest player, but head coach Vic Schaefer knows what he is going to get out of her night in and night out.

“The thing you want from any player is just that consistency piece that you know what you’re going to get from her everyday,” Schaefer said on Feb. 11. “I’m always going to get somebody who plays hard in Audrey.”

Tied for second on the team with 1.7 steals per game, the senior forward has brought a hustler mentality to the floor that has rubbed off on the rest of the team.

Along with her hustle and veteran leadership, Warren also knows when she needs to be aggressive. With games of 21 and 17 points under her belt, she will look to continue to pick and choose her spots to score heading into the Big 12 tournament.
Lauren Ebo
Averaging right around seven points and seven rebounds per game, Ebo has proven to be an anchor for the Longhorns in the paint.

She came up big in pivotal games with her great rebounding and finishing skills around the rim. Her best game of the season came against a conference rival, Oklahoma, where she put up 13 points and 14 rebounds.

The senior center has provided consistency for Texas at the position, and has set a precedent for what the future starting bigs for the team should bring to the table moving forward. She will look to finish her collegiate career strong as the Longhorns head into the postseason with championship aspirations.
Joanne Allen-Taylor
Although Allen-Taylor stepped into a new role this season with freshman guard Rori Harmon being the main ball handler for the team, her mentality has not changed as a veteran leader of this team.

Averaging around 11 points, three rebounds and two assists per game, the senior guard has been a steady contributor for Texas all season; however, the stats don’t show her real value to this squad.

The Houston product’s leadership has helped this young squad win games. After every game, Allen-Taylor has been the one owning up to mistakes, and she carries everything with her on and off the court.

Even when the Longhorns are rolling, she’s been the one to keep the team focused on the next game, looking to finish her collegiate career strong.

“One game at a time,” senior guard Joanne Allen-Taylor said on Jan. 26. “Can’t look too far ahead. Just get the next one, that’s it.”