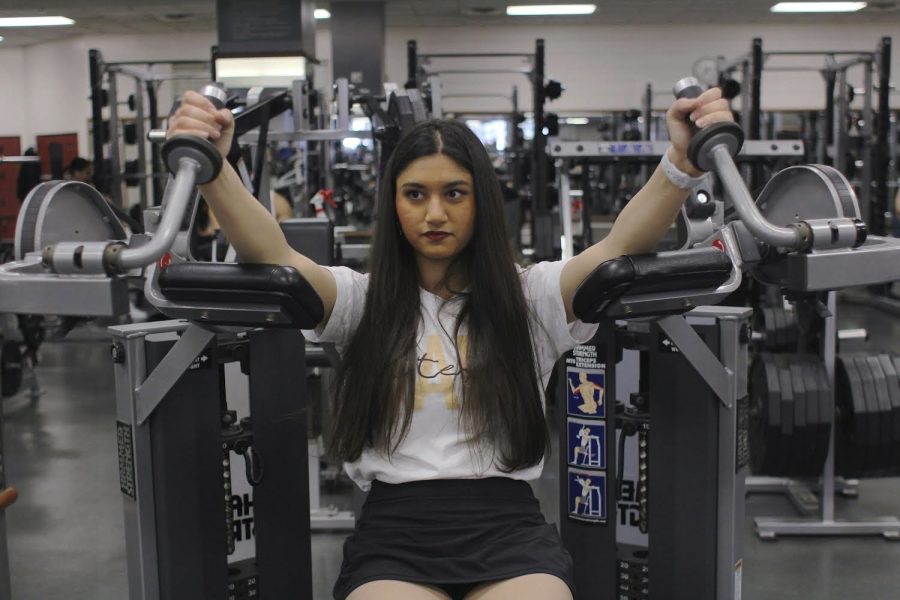 Sophomore finance major Ishika Puri uses a weight machine in Gregory Gymnasium on March 1st. Ishika is passionate about creating a welcoming environment for female students to work out.

Weights slam onto the floor, sweat drips down foreheads and grunts between deadlifts echo throughout the gym. Amid this, the only girl in sight focuses on her own workout, trying to ignore lingering glances.

Finance and business honors sophomore Ishika Puri said she has always found fitness to be an effective emotional release and tool for re-grounding herself. However, she said intimidation in male-dominated gyms, commonly experienced by herself and other women, can discourage women from pursuing fitness and interfere with this outlet.

“I thought that there was definitely a need for female spaces at UT,” Puri said. “Going to a gym and seeing all men and being the only girl lifting, I feel a little bit intimidated sometimes. I think having that community of girls is really important.”

Gain originally started at Baylor University, and Puri decided to launch a UT chapter in August 2021. Since then, the chapter has grown to include over 140 members, due to the club’s strong values and holistic approach to fitness.

“I really liked the goal and mission that Gain had about promoting working out and being healthy, not just through studio workouts, but also through wellness retreats, positivity and mental health,”  said QT Dang, finance sophomore and Gain studio workout coordinator.

Puri said Gain’s encompassing approach to fitness grew out of personal experiences. Watching female friends struggle with eating disorders and female family members battle cancers specific to women fueled her goal for the club to include all aspects of health, not just exercise.

“People look at just physical, mental or emotional health, when in reality, your well-being is a combination of all of them,” Puri said.

Combining all aspects of health in a female-focused space helped members, such as Monica Villarreal, feel more comfortable in the gym and gave her a unique community to engage with.

“It can be intimidating to go to the gym by myself, especially if there’s only guys around, which happens quite often,” the business and international relations and global studies sophomore said. “You do notice guys are looking at you, and you’re afraid of being judged.”

However, through her experience in Gain, Villarreal said she now feels confident exercising in a group setting.

“Gain is empowering,” Villarreal said. “When (I’m) with a group of girls, or people that are like (me), I’m always laughing and having fun.”

Despite its already large member base, Gain is only in its beginning stages. In the future, Puri said she hopes Gain can offer intramural sports teams within the club, a big/little sister program and group dinners after workouts. Puri said all her goals are united by one common theme: encouragement and community growth.

“(Gain) is about starting spaces where women feel comfortable with other women to do things that they wouldn’t feel as inclined to alone,” Puri said.

Editor’s note: This story originally appeared in the March 4, 2022 flipbook.