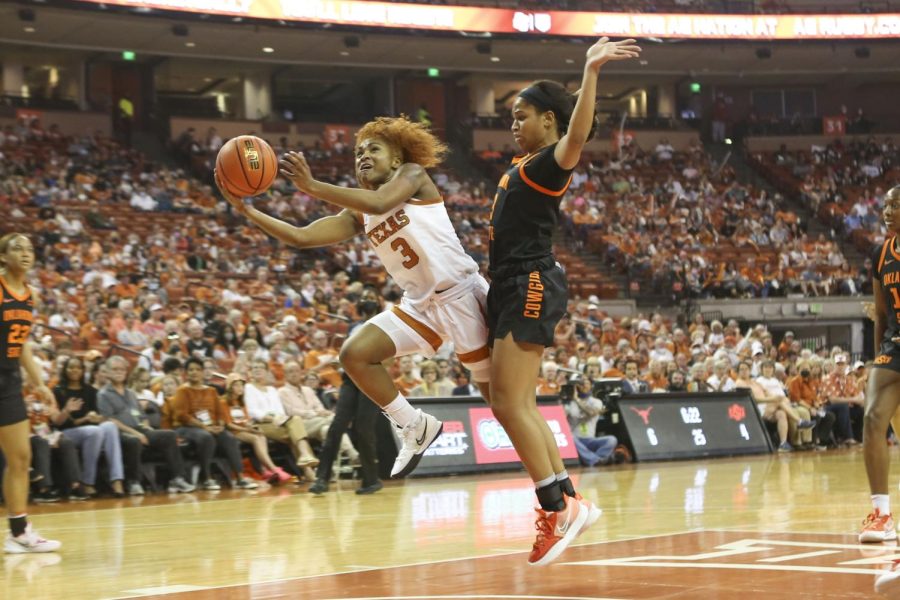 Dropping both of their meetings with the Bears in the regular season, the Longhorns sought vengeance as they inched closer to their first Big 12 championship since 2003.

Following a hard-fought overtime victory in the semifinals over Iowa State on Saturday, Texas had its eyes set on the Big 12 championship game against one of its biggest rivals, Baylor.

In its previous two matchups with the Bears, the Longhorns started the game slow, trailing at the end of the first quarter in both games. But on Sunday afternoon, with the championship on the line, the team got into its groove early, scoring 16 points in the first and holding a two-point lead over Baylor.

Texas built off its start with a strong 23-point second quarter that was capped off with a difficult scoop layup from freshman guard Rori Harmon at the buzzer, stretching its lead to 11 at the end of the first half.

Once the No. 7 Longhorns built their lead, they never looked back, overthrowing the defending Big 12 champion No. 4 Bears 67-58 behind a spectacular performance from Harmon.

“We made shots in the first half, defended pretty well. You hold Baylor to 58 points, you’re doing something,” Texas head coach Vic Schaefer said on Texas Sports radio. “You had a bunch of kids really play well today, make some big shots and make some big stops, and I couldn’t be more proud of this group.”

It was no surprise that after scoring 30 points in the semifinals, Harmon was going to be the one who put a stamp on this game. Not only did she come out and play press defense on the Bears’ guards throughout the entirety of the game, but she also lit up the floor with some efficient shooting from the field.

Harmon ended the afternoon with 20 points on 8-10 shooting and 4-4 from the free-throw line. Along with her efficient shooting, Harmon led the team in assists and added five rebounds to her total. With her incredible performances during the Big 12 tournament, the 2021-22 Freshman of the Year had the honor of being named the Most Outstanding Player (MOP) of the tourney.

“I just think her decision-making right now is at a really different level. She’s taking good shots and she had no turnovers tonight,” Schaefer said. “I think she’s coming into her own. She’s really come to another level, and so I think she’s willing our team and she’s leading them.”

Winners of the previous three Big 12 championships, Baylor was finally dethroned behind a spectacular all-around showing from Texas. The team shot 46% from the field, but more importantly, nearly 82% from the free-throw line, a major improvement from their regular-season average of close to 70%.

Along with some great shooting, the Longhorns forced 16 Bears turnovers and held them to just 5-17 shooting from beyond the arc.

With the Big 12 championship now in the hands of Texas, the team will look to focus on a bigger task: winning the NCAA championship.

“All I’m going to say is, don’t ever underestimate us,” freshman forward Aaliyah Moore said. “Don’t ever!”

Editor’s note: A previous version of this story incorrectly stated that Texas and Baylor were ranked No. 3 and No. 1, instead of No. 7 and No. 4. The Texan regrets the error.