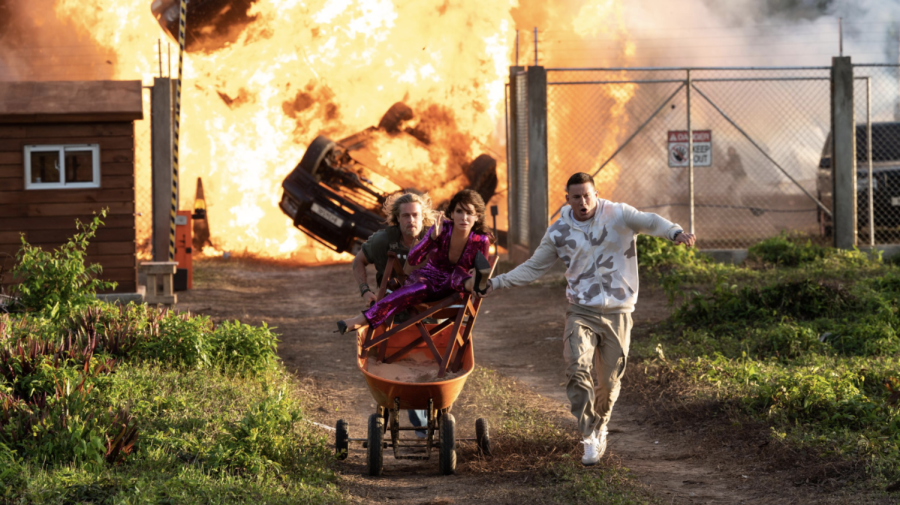 On-screen chemistry,  fight scenes and an absolutely evil Daniel Radcliffe take on the big screen in the new action comedy “The Lost City,” which premiered March 12 as a SXSW headliner. Directed by brother duo Aaron and Adam Nee, the big-name film offers both a comedic relief and fun viewing experience.

When smut romance author Loretta Sage (Sandra Bullock) is pulled out of her hermit-like lifestyle for a book tour, she feels out of touch and frustrated with her cover book model, Alan (Channing Tatum). Exasperated, Loretta leaves the tour event, which spirals into an argument with Alan and a kidnapping by power-hungry billionaire, Abigail Fairfax (Radcliffe). Fairfax hopes Loretta will help him find a lost city’s treasure mentioned in her latest book. Seeking to simultaneously woo and save Loretta, Alan sets off with Jack Trainer (Brad Pitt) to rescue the author.

The iconic actors take on their roles with ease and deliver natural comedic performances. In  stark contrast to the heroic protagonist role of Harry Potter, Radcliffe seamlessly steps into the shoes of the villain, proving his ability to play more than his popular, beloved wizard character. With bulging veins and temper tantrums as he berates and yells at everyone around him, Radcliffe’s portrayal of a selfish, horrible person tempts the audience to see him in another antagonist role.

Intense scenes share the cast’s ability to commit to their characters. One stand out scene features Loretta slowly pulling off blood-sucking leeches off of Alan’s bare behind. Another scene follows Alan attempting to fight as he trails behind Jack Trainer, who violently fends off approaching bad guys. Tatum’s acting as a seemingly clueless gentle giant serves as a fresh take on the typical strong leading romantic interest.

A surprising gem in the star-studded cast comes through Loretta’s social media manager, Pratt Caprison (Patti Harrison). Playing an inept brunette, Pratt perfectly encapsulates those who always fail to read the room. The social media savvy character jumps in with unnecessary yet comedic comments. Each time she interjects with her monotone voice and smirk, the audience is left throwing their heads back in laughter.

With an author finding adventure outside of her fictional written stories, Bullock once again delivers an authentic independent and capable woman. Loretta’s journey from a mourning widower afraid to jump back into the world to a tough character allows for an impactful message delivered with the help of laughter-inducing plotlines.

At its SXSW debut, “The Lost City” left the audience with new laugh lines around their smiles and anticipating the next twists and turns of the story. Genuinely funny throughout, the film shares another side to the brilliant cast.