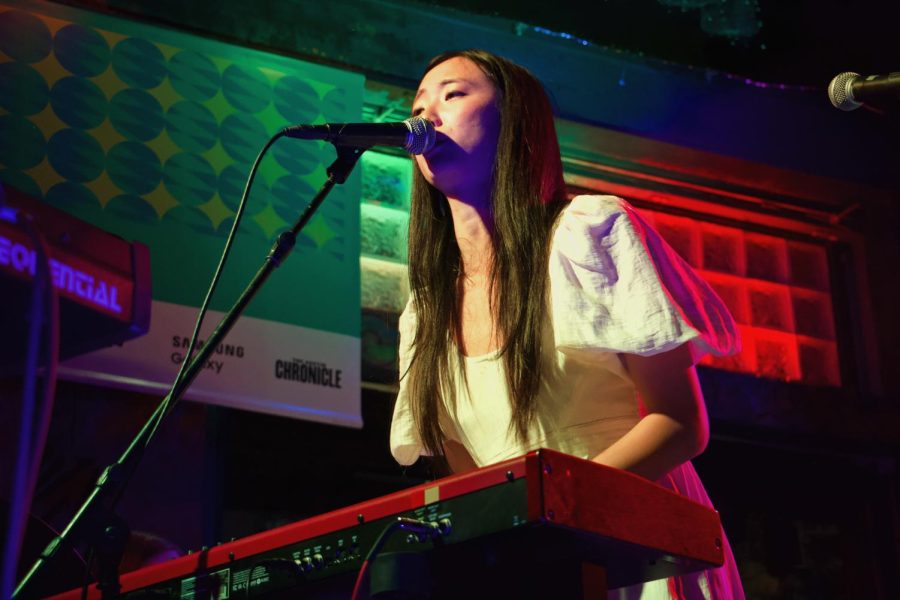 The first line of Sarah Kinsley’s cleverly placed opener, “Karma,” extends toward her audience, reciprocating the warm welcome she received from South by Southwest.

“Now come on in, take a seat and let’s get started,” the New York City-based artist said.

Under Esther’s Follies’ saturated stage lights, Kinsley beamed with gratitude as she played her enchanting eight-song set with a band on March 17.

The artist’s live vocals slide between soul and elegance, hitting high and low notes while traversing through stellar labyrinth-like melodies. The text painting in her music becomes apparent, literally going “Over + Under” in her second song.

Continuing the dichotomy of her set, Kinsley performed a dreamy guitar rendition of her ballad “Caught Up In A Dream,” completely stripping away the lone piano from the studio version. The artist also sang a funkier “Serious,” including a grungy bass to a satisfying and surprising anti-drop. The singer began grooving to the track’s colorful interlude, her energy gradually pulling the crowd forward.

Aside from showing her official discography, Kinsley revealed three unreleased songs: expressing angry lyrics in “Green,” fun syncopation in “What Was Mine” and passionate vocals in “Hills of Fire.”

Kinsley truly saved the best for last. Taking a deep breath, the artist delicately played the piano arpeggios of “The King,” summoning its bright, blaring synths. After the first chorus, her audience stood up and gathered in front of the stage, dancing to the beat and screaming the lyrics, “You’re still young, and you’re still free.” Kinsley completely captivated the crowd, transporting them to the exuberant times of their youth.