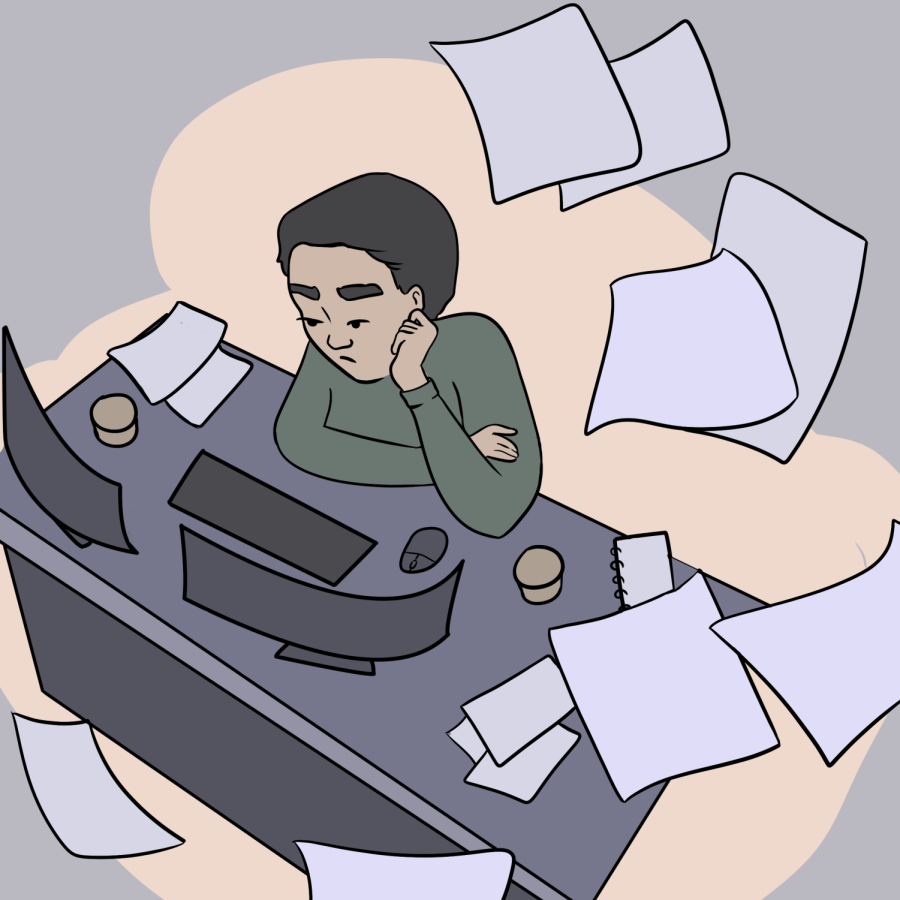 Editor’s Note: This article first appeared in the March 4, 2022 flipbook.

With sunken eyes glued to her screen, Nikita Sharma spends her nights meticulously reading through endless lines of code. The computer science teaching assistant said she answers all her students’ concerns while evaluating their programs.

“(Teaching assistants) help debug code, hold office hours (and) lead a discussion section,” computer science junior Sharma said. “On top of that, you often become the most trusted person on the teaching staff to students.”

Sharma said she noticed undergraduate CS TAs receive disproportionate wages, starting at $10 per hour despite their extensive workload. In March 2021, Sharma began working with the Association for Computing Machinery 4 Change (A4C) to address the lacking salary and support system for UGTAs within the CS department through advocacies and mental health workshops.

According to a Fall 2021 survey conducted by A4C, which received 192 responses across the College of Natural Sciences, students avoid taking on a teaching position mainly due to large time commitments and low wages. When the organization relayed these findings to the department through email, Sharma said the department remained passive in their response and noted that tuition and state funding limited proctor compensation.

In addition to promoting salary increases, Jennifer Mickel, a computer science and math sophomore, said she helps plan the organization’s projects, such as TA trainings to create a safe and inclusive environment for other students.

“(TAs) saw that students would come (to them) super stressed, and they felt there wasn’t adequate training revolving (around) how to handle the situation,” Mickel said. “If (TAs) are better trained (to be) more welcoming towards students, students are more likely to reach out for help.”

Although computer science junior Sweta Ghose became a TA primarily for the experience, she said she initially felt frustrated seeing her efforts not being properly compensated.

“When I started, I got paid $10 an hour, and I didn’t know any different,” Ghose said. “I just thought that’s what everyone got paid.”

The CS department implemented a new pay increase system this semester, in which proctors’ compensation increases by $1 on a semestral basis. Ghose said she received the maximum possible salary of $12 per hour during her third semester in the position.

“It would be helpful if the department (directly) reached out to the TAs and asked them, ‘Do you feel like you need another TA for this class?’ or, ‘Is (the compensation) fair for what you’re doing?’” Ghose said. “We haven’t had much communication from the department to begin with.”

Sharma said she wants TAs to have more avenues to connect with one another. Because their initiatives require more physical and financial support, she and A4C call for further action from the university.

“I want some sort of community. The only way I managed my first few semesters teaching was because I had upperclassmen I could ask (help from),” Sharma said. “Going forward this semester, I want $15 an hour, at a minimum. I don’t think that’s something not feasible to ask for. CS brings in countless corporate sponsors. $15 is not unreasonable.”