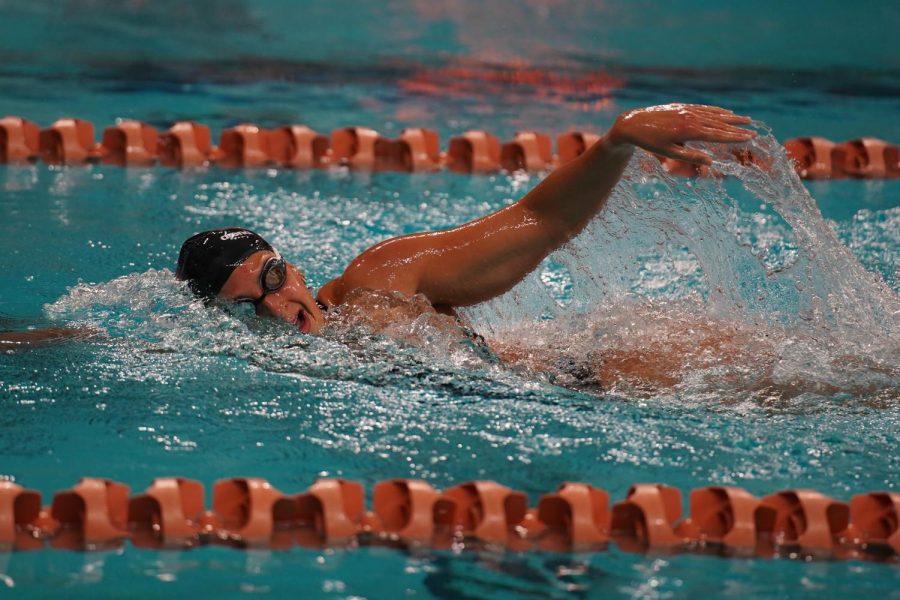 Texas women’s swimming and diving came in second place at the NCAA Swimming and Diving Championships on March 19. Despite the Longhorns’ best efforts, the championship was Virginia’s to lose as the Cavaliers went on to break five records and secure victory in 11 of the 18 events.

Texas scored 406 points, following first-place Virginia’s 551.5. On the final day of competition, Virginia topped off its back-to-back championship run by setting a record time of 3:06.91 in the 400-yard freestyle relay event.

Competition began March 16 with Virginia telling the early story of its victory. Virginia opened with a first-place victory in the 200-yard medley relay, breaking a meet record with 1:32.16.  Texas finished fifth with a time of 1:34.46. In the 800-yard freestyle relay, Texas took fourth place with a time of 6:56.21, while Stanford took first with 6:48.30.

Virginia continued to set records on the second day of the meet, with sophomore Alex Walsh finishing the 200-yard IM in 1:50.08. Texas junior Kelly Pash finished fifth with a time of 1:53.31.

Later on in the 50-yard freestyle, Virginia once again impressed as junior Kate Douglass broke the previous American record with a time of 20.84.

Longhorn freshman Hailey Hernandez took fourth place in the 1-meter springboard with a score of 348.50, while Miami sophomore Mia Vallée set the meet record at 365.76.

However, Texas closed out the second day with a 12th-place finish in the 200-yard freestyle relay while Virginia once again took first. Despite the placement, the Longhorns finished the day in second place with 128 points to the Cavaliers’ 210.

Entering the third day of competition, Texas secured a fourth-place finish in the 100-yard butterfly with sophomore Emma Sticklen coming in at 50.29. However, all eyes were once again on Virginia as Douglass set the American record with 49.04.

Pash came in third in the 200-yard freestyle with a time of 1:42.38 as Stanford took first place.

Texas came in fourth in the 400-yard medley relay to close the books on the third day with a third-place ranking of 257 points, behind Virginia and Stanford.

The final day of championship competition opened with the 1,650-yard freestyle as Texas made its first second-place finish with freshman Erica Sullivan coming in at 15:45.94, just behind Wisconsin at 15:40.84.

In the 200-yard breaststroke, Douglass broke yet another record with a 2:02.19 time. Texas sophomore Anna Elendt would complete the event in 2:04.31 to finish behind Douglass in second.

In the platform diving event, junior Longhorn divers took third and fourth place with scores of 315.45 and 290.90 respectively.