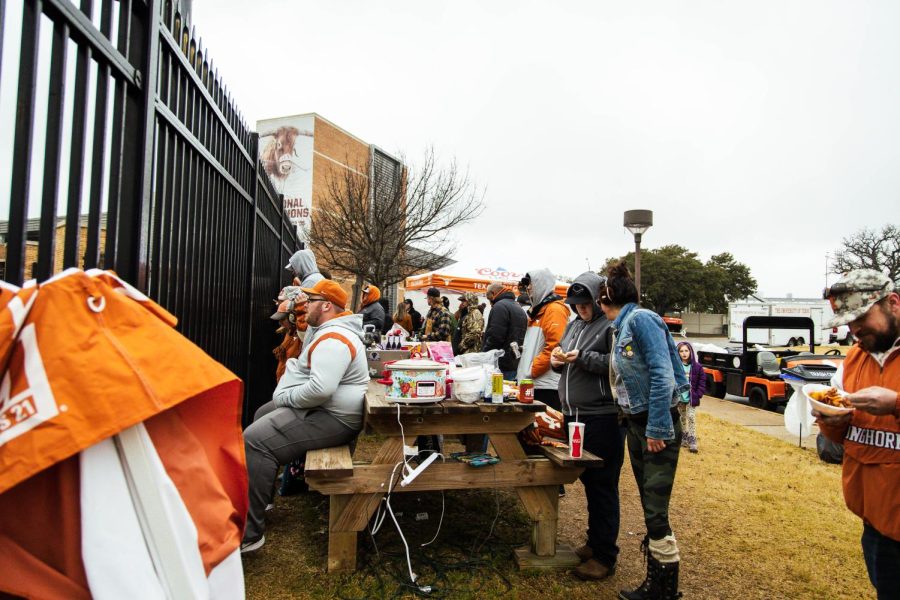 Editor’s Note: This article first appeared in the March 1, 2022 flipbook.

As a lifelong Longhorn fan, Marc Peña understands how special it is to be raised at UFCU Disch-Falk Field.

After attending and graduating from the University of Texas himself, the baseball superfan sought a community where friends and family could come together to support Longhorn baseball through its highs and lows.

Alongside Jeff Cross and other Texas baseball fans, Peña informally established Occupy Left Field about 14 years ago as a tailgate situated just outside Disch-Falk’s chain link fence in left field. Originally a place where people could hang out and have fun, the group continued growing through the years, eventually establishing itself as a face of Texas baseball culture.

But Occupy Left Field is more than a tailgate.

“(The foundation is) Texas alumni, older players, and our group. (All) of us (came) together to start the foundation,” Peña said. “(The alumni) came to us (because) they wanted to put a name to (the foundation) that people would recognize.”

As a registered 501 (c)(3) organization, the foundation said it will volunteer and provide donations to local Austin charities such as RBI Austin, which helps make youth sports more affordable for inner-city youth. To do this, the group hopes to contract with current Texas baseball players to volunteer and appear at community events.

“We want the kids to put in the time (at) the local charities to get something back from our foundation,” Peña said. “A portion of the money that we raise is going directly to the charities. The rest of it will go to the players.”

The foundation’s ability to offer contracts to current players is the result of updated NCAA and Texas policies surrounding athletes’ ability to profit off of their name, image and likeness. Under previous policies, current student-athletes would not have been allowed to receive payment for the types of appearances the organization hopes to enlist current Longhorns for.

Peña said that involving Texas baseball players in volunteering and fundraising efforts is important to the nonprofit because of the lack of full scholarships for all student-athletes.

Rewarding players financially also helps to ensure that Texas remains an attractive place to play to high school recruits. With the new collegiate landscape driven by the new NIL policies, players that would have otherwise gone straight to the MLB Draft might opt to play college baseball or stay in school for longer than they otherwise would have.

“If you’re a program like Texas, you have to get involved in this to make sure that you stay competitive,” Peña said. “We’re really depending on the Texas fan base to come together and (donate to) make sure that happens.”