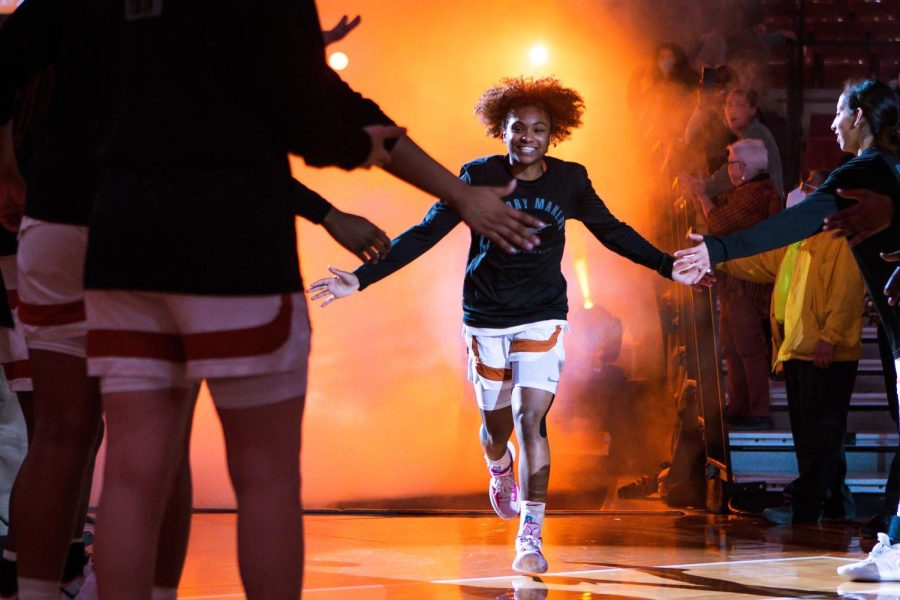 Editor’s Note: This article first appeared in the March 11, 2022 flipbook.

In her freshman season, Rori Harmon started 27 of the 29 games she played in, getting her hands on the ball as much as possible.

One of the best freshmen in women’s basketball this season, the point guard has already received a plethora of awards throughout the year, such as Big 12 Freshman of the Year.

The instant success was expected, however. Prior to coming to Texas, the Houston product was named a McDonald’s All-American and the 2021 Texas Gatorade Player of the Year during her high school career with the Cypress Creek Cougars.

“Growing up, my dad would always say, ‘You just have to have the heart to want to take the ball from somebody,’” Harmon said after defeating West Virginia earlier this season. “I came here to play basketball for (head) coach (Vic) Schaefer, and defense is his number one thing.”

Harmon leads the Big 12 and is ranked No. 4 among NCAA freshmen in steals with 77 this season. She’s averaging 2.7 steals per game and led a game in steals 14 times, the most on the Longhorn’s roster. Expectedly, Rori is usually guarding the opposing team’s ball handler.

“Like coach always says, she’s the one that starts our defense,” senior Audrey Warren said. “She brings it every time. I know she’ll go after every ball she can get.”

Despite her defensive accolades, Harmon’s talent isn’t restricted to one end of the court. Regardless of her lack of experience in college athletics, she executes the main keys of the Longhorn offense, such as scoring off of forced turnovers, finding the open teammate on offense and sinking shots consistently.

“Just like on defense, if she starts our offense and she’s going hard, I think everybody else will go hard with her,” Schaefer said.

This season, Harmon became the seventh freshman in Texas history to record 100 assists in a single season.

Averaging 4.8 assists per game, Harmon led the Longhorns in assists during 23 games. In two games this season, she obtained over 10 assists.

Additionally, Harmon is more than capable of sinking her own shots. Averaging 10.4 points per game, she scored in double figures in 15 games and has been the game’s leading scorer four times. In two games, Harmon scored at least 20 points.

“When she’s played well, our team plays well,” Schaefer said. “That’s the learning piece that I have to teach her. She has a really impactful job.”

Despite being the team’s shortest player, Harmon averages 4.7 rebounds a game and has an impressive six games as the team’s leading rebounder. Harmon is the only Big 12 player and one of two freshmen with more than 250 points, 100 rebounds and 100 assists this season. She’s also acquired two double-doubles.

Another thing Harmon has faced is the threat of the freshman wall. Of the 29 games she’s played this season, she’s started in 27 of them. Playing an average of 28.7 minutes a game, it’s evident that her game has been crucial to the Longhorns’ success.

“It’s a challenge, but it’s not hard,” Harmon said. “Having that sense of urgency of wanting to be successful as an individual first and then, if you’re working on yourself, you get to help your team.”

It is indisputable that within the game of basketball, you get out what you put into it. With three more years of eligibility at Texas, Harmon only has time to grow her laurels.