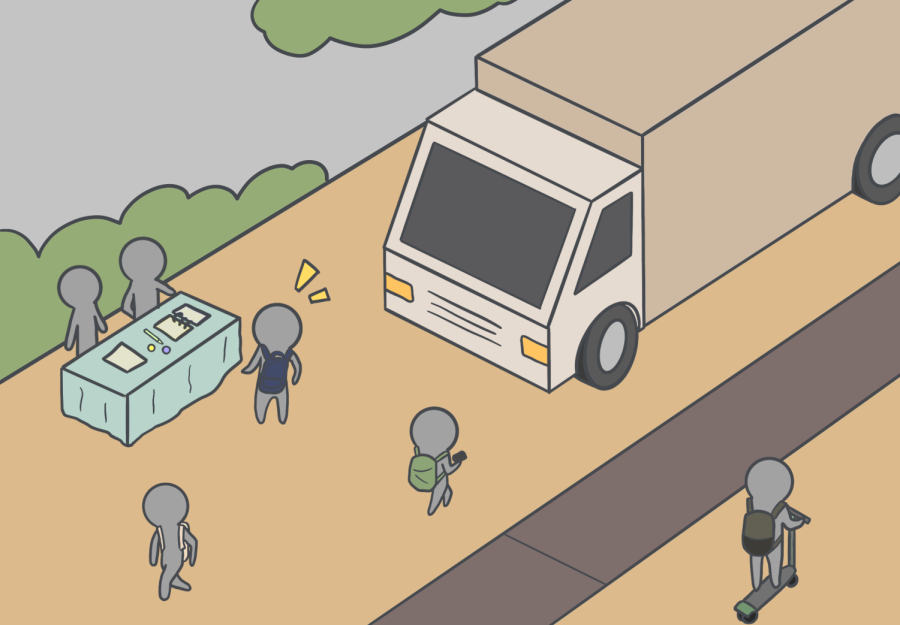 The first half of my daily commute starts with a walk down Speedway. I am typically greeted with a few familiar faces, like the iconic Monochrome for Austin canoe sculpture and delivery trucks.

Common culprits range from Coca-Cola and Pepsi delivery trucks coming on campus to restock vending machines, to UPS, Amazon and other delivery companies dropping off packages in buildings up and down the corridor. Due to the Speedway’s narrow width, both students’ and vendors’ daily routines become hindered by each other’s presence within the relatively confined space.

Given that the current delivery system can delay student commutes and inhibit vendors’ abilities to complete their work in a timely fashion, UT should consider creating a system in which vendors make their drop-offs in a designated, centralized underground zone.

“It’s hectic with big semis on Speedway or on campus, especially when it’s a high volume time (and) people are coming out of classes,” Kenana said. “When I’m on Speedway walking to my next lecture and there’s a really big semi, more people are pushed to the side, and sometimes I’m like ‘Oh my gosh, I’m going to get hit by a semi today.’”

Students shouldn’t be displaced or feel like their safety is at risk while walking on campus. However, when large vehicles are constantly rolling through a high traffic walkway, it can be difficult to feel safe. While a general disruption of traffic caused by delivery vehicles can be tolerated, students feeling unsafe on campus cannot.

After explaining the underground proposal, Kenana expressed interest in the idea, explaining that it is likely a feasible project.

“I feel like (the University) definitely could put money towards that (underground proposal),” Kenana said. “I don’t know the exact numbers, but UT has a crazy amount (of money).”

According to UT’s Budget Office website, the University has an annual budget of about $3.6 billion. While the underground proposal would likely be an expensive and time consuming project, the University could potentially benefit from the proposed system in the long run.

Specifically, a centralized system located in the heart of campus could help streamline vendor deliveries by lessening their delivery times and helping packages arrive at their respective entities in a more time-efficient and safety conscious manner.

Under the proposed system, once packages are dropped off, they would be categorized by drop-off building and subsequently delivered by staff at different intervals throughout the day in accordance to when they were received.

This proposal wouldn’t be as compelling if only students stood to benefit. University vendors stand to gain as well. Coby Cardosa, an on-campus FedEx courier, explained what he’s heard in the past regarding a centralized delivery drop-off location.

“A lot of things come onto campus,” Cardosa said. “(UT) has talked in the past about a centralized receiving location where all vendors drop off everything at that central location, which would eliminate vendors coming on campus and crowding it up, and as you can see, there’s never really anywhere to park.”

While there does appear to be a centralized receiving location at the University, vendors and delivery drivers still clog up campus. The proposed underground system would allow couriers like Cardosa to make their drop-offs in a designated underground zone that is separate from the crowded areas of campus, drop off their materials and move on to their next delivery.

Veronica Trevino, financial and administrative services communications media manager, said in an email that “vendor parking spaces are building specific” and suggested I reach out to relevant building staff.

The current system appears to be the opposite of centralized. Different staff members in different buildings could possibly mean more room for error, miscommunication and delivery chaos.

A central, underground system could play a big role in resolving this issue.

While the University has made sizable infrastructure investments in the past, increasing delivery efficiency while keeping their students safe is where the University should invest going forward.