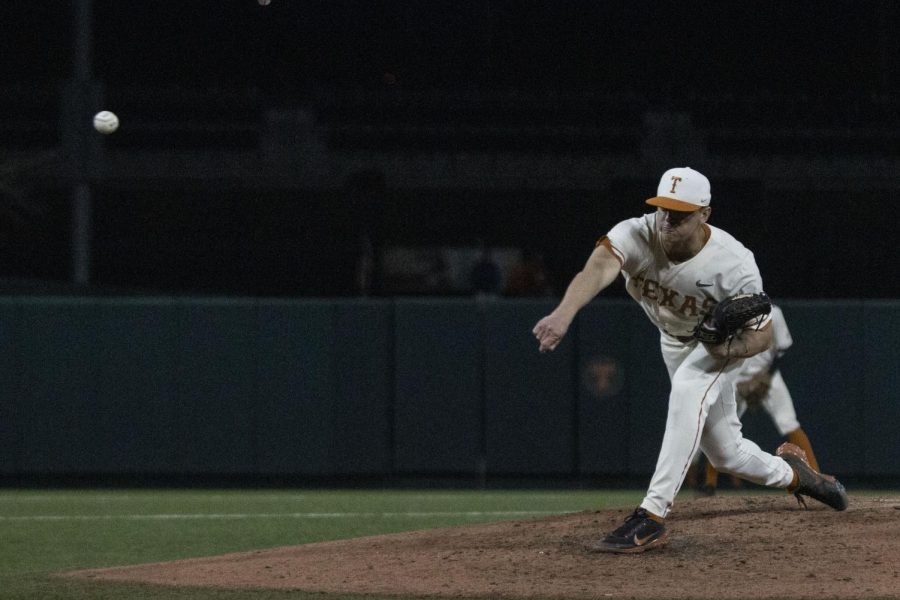 In his first two seasons as a Longhorn, redshirt sophomore Justin Eckhardt endured a Tommy John surgery and a shortened COVID-19 season, making appearances on the mound just 11 times.

In his first game as a right handed pitcher, the Sealy product used just four throws to put out three Abilene Christian batters in what would be the final inning of the 2020 season. A year later, he played six games on the mound for Texas for a mere 13.1 innings.

However, Eckhardt shined in his second start of the season against Central Arkansas, leading No. 2 Texas to a 7-2 victory at UFCU Disch-Falk Field.

Despite only playing a total of 5.4 innings on the season before his Tuesday night start, the right hander commanded the zone in his seven innings on the mound against Central Arkansas. Using his controlled slider, Eckhardt struck out a career high seven Bear batters on the hill for the Longhorns.

Following three years of waiting for playtime out of the bullpen, Eckhardt feels humbled with his long-awaited pitching performance.

“It feels rewarding,” Eckhardt said. “I kept my nose down and went back to work — and it’s all working out now.”

Eckhardt’s new role as one of Texas’ midweek starters comes after news of redshirt sophomore Tanner Witt’s season ending UCL injury, throwing the Longhorns’ accoladed pitching rotation into disarray a third of the way through the season.

“(Eckhardt) set the tone,” head coach David Pierce said. “(He’s been) working so hard on delivery and being on time with the release point.”

Another player making large strides in the previous weeks is graduate transfer Skyler Messinger. Despite having a slow start to the season batting, the third baseman went 4-for-4 on the night with a run and an RBI.

“I just credit his character,” Pierce said. “He puts the work in and plays great defense. He’s not forcing how he fits in the clubhouse and is being himself.”

Texas baseball heads on the road to face No. 16 Texas Tech in Lubbock for the first week of Big 12 Conference play this Friday.