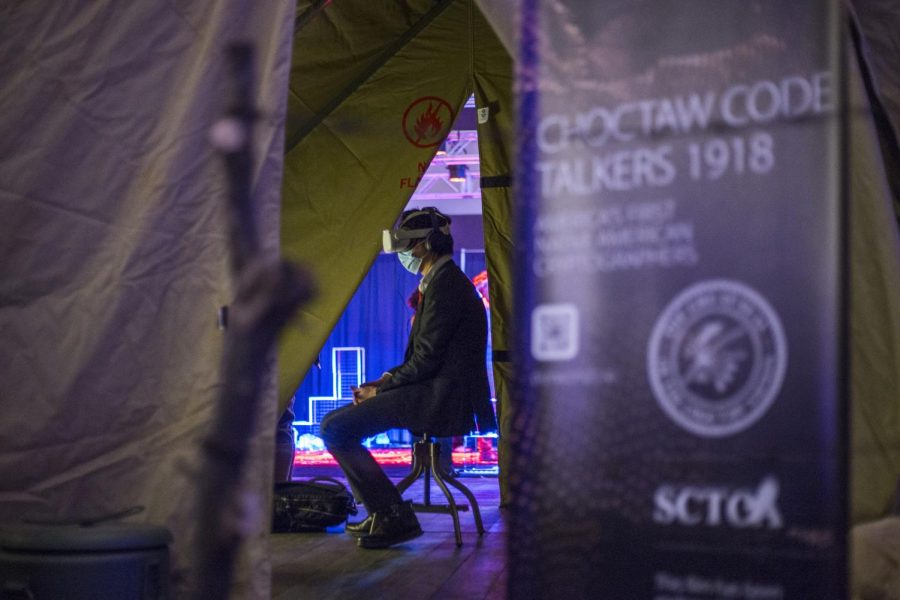 This week at SXSW, Kilma Lattin, founder and CEO of historical world-building company Our Worlds, presented his short film project using immersive augmented reality technology to tell the story of members of the Choctaw Nation of Oklahoma during World War I. The film, titled “Choctaw Code Talkers 1918,” features a 4-minute history with art and narrations done in collaboration with Native American creators, exploring how Choctaw soldiers sent encoded messages between American army bases in their own language to help defeat enemy forces.

The Daily Texan sat with Lattin to discuss his world-building company and what he hopes to achieve through its work.

The Daily Texan: What were the earliest stages of undertaking the Choctaw Code Talkers project like?

Kilma Lattin: (Our Worlds uses) immersive realities and many new technologies to tell stories in new ways. During the course of one of our production schedules, I came across a piece of history I didn’t know about our own people — Native Americans. The Choctaw were the original code talkers, and (that) challenged my own belief about history. I always thought the Navajo Code Talkers from World War II were the original code talkers. I wanted to go out and see if other people had the same misconception. While we were doing other productions with Native Americans — Native American chiefs, Native American artists, storytellers and musicians — I started an informal query process. We wanted to set the record straight. It’s not to take anything away from the brave Navajo who served in World War II, but if we’re going to tell the story of the code talkers, we should tell the whole story.

DT: Where did the inspiration come from to tell this story after it had been buried in the past?

KL: Imagine education or content unfolding around you wherever you went. Standing here in Austin, what did this look like before all the buildings? You could open up (our) augmented reality world software, (go) back in time, erase the buildings and then connect with a primary source narrative from the Comanche or the people who used to be here. We can elevate other cultures (and their) stories based on the community … it’s located (in).

DT: How does it feel to be in a position with your company to give a platform to Native American and Indigenous stories?

KL: I feel a sense of agency and authenticity. I feel that this is my work. I understand it better than anybody, and it’s my place to do it because I walk in two worlds. I walk in my Native American world, and I walk in my non-Native American one. I cross between the two seamlessly. What we are doing and what I am doing is building bridges between institutions, communities, people and our worlds. The company is that missing piece … Indigenous wisdom would tell you that learning happens experientially in nature, and we’re adopting that model.

DT: What do you hope people will walk away with after seeing this experience?

KL: I want them to come away with some knowledge they didn’t know before they went in. At the end of the day, we want to help people connect to a story. It’s great to have this film here in Texas — so close to Oklahoma, you can’t help but take pride (in it being local). It validates our model that geolocation and place-based stories matter. If I’m experiencing stories based on where I’m at, I’m like, ‘I feel the weight of this place.’