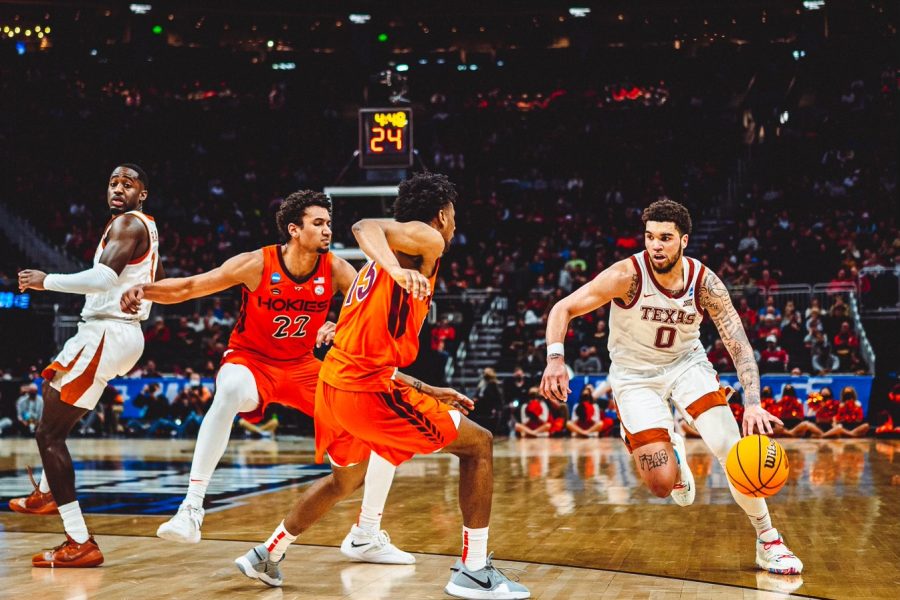 Editor’s Note: This article first appeared in the March 22, 2022 flipbook.

One of the first things Chris Beard said after Texas was bounced from the NCAA Tournament was about building a new program culture.

“We established a lot in the first year building the program,” Beard said.

Texas’ season came to a sputtering end Sunday night in a 81-71 loss to Purdue in the second round of the NCAA Tournament.

Sunday’s game was filled with errors that Purdue took advantage of. Most notably, Texas sent Purdue to the free-throw line 46 times. The record for most free throw attempts in an NCAA men’s second round game is 52.

Texas only had 12 shots from the charity stripe.

No matter what may be said about the officiating and Texas’ own mistakes on Sunday, the season was not a failure. In terms of establishing a successful culture, the Longhorns’ roster has much to be proud of. Friday’s first round win over Virginia Tech was Texas’ first NCAA Tournament win in eight years.

Despite the early exit from the Tournament, things are looking up from last year, when Shaka Smart was on his way out of Texas just days after a first round loss. At least senior guard Andrew Jones, who has played for two new head coaches at Texas, seems to think so.

“Being one of the older guys on this team,” Jones said, “I witnessed a coaching change and I know how difficult it is to get a group of guys to buy into a culture of winning and buying into a new philosophy.”

Jones’ freshman year at Texas was former head coach Shaka Smart’s tumultuous second year. Jones played what might be his final season in the beginning of the Chris Beard era.

“My first year was awful with a new coaching staff,” Jones said.

In Smart’s second year at Texas, the Longhorns went 11-22 and finished last in Big 12 play. In Beard’s first year, Texas finished 22-12 and earned a bid to the NCAA Tournament.

Although Texas’ run in this year’s March Madness did not translate into a championship, Beard has set the foundation for future success.

“This culture’s strong,” Jones said. “The coaching staff is strong and players just got to come along with it and trust it.”

Baylor head coach Scott Drew, who led the Bears to a national title in 2021, ended his first year in Waco with an 8-21 record. Baylor did not reach the NCAA Tournament until Drew’s fifth year as head coach.

During his first year at Texas Tech, Beard’s Red Raiders went 18-14 and did not qualify for the NCAA Tournament. By the time Beard left Lubbock, Tech had made multiple March Madness appearances and made it to the national title game in 2019.

“You gotta learn how to win,” Beard said. “Winning’s an art. And I thought this year we established it.”

No matter what happens down the line, this year’s Longhorns will always be the group that got Texas out of an almost decade-long streak of falling out of the NCAA Tournament in the first round.

“We came down here to win this tournament and came up a bit short tonight,” Beard said. “But (I have) never been more proud of a group.”